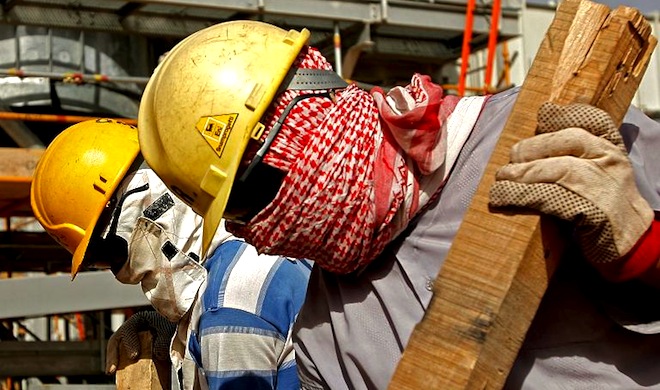 Unprecedented events across the Middle East and North Africa have fundamentally changed the geopolitics of oil, writes Professor Mohammed Akacem in this thought-provoking analysis.

The Organization of Petroleum Exporting Countries, OPEC, has decided to keep their output ceiling unchanged in the face of falling oil prices. Despite the calls for reducing oil production by the price hawks to shore up sagging oil prices, the oil cartel decided to pass.  While oil consuming countries are fixated on their dependence on the oil cartel, it is time to examine the reverse: how much are OPEC’s economies fixated on every oil price move and its impact, not only on their economies, but on their possible political survival?

TO BEGIN WITH, the Arab Spring has changed the geopolitics of oil. Governments are now called upon to meet the demands and aspirations of their populations and the only way to do so is through oil income. This commits them individually to keep pumping oil at rates that may be higher than the welfare the cartels calls for.

The table below on the oil price gap shows the dilemma faced by OPEC.  It shows the difference between the current oil price and what these countries need. Only Kuwait and Qatar can live with the current oil price of around 73 dollars per barrel. The rest will be forced to pump more oil to generate more revenue to balance their budget. Some could tap their sovereign wealth funds to do the same but the fight for market share makes that option less appealing.

Almost three decades ago, I argued on the pages of the Wall Street Journal that the oil cartel may split into two.

The suggestion at the time was for the creation of a much smaller oil cartel, GOPEC – the Gulf Organization for Petroleum Exporting Countries. This new oil cartel would consist of the members of the Gulf Cooperation Council since they have more in common politically as well as economically. More importantly, they have a relatively smaller population base but a larger oil resource base compared to the other oil producers in OPEC. This theoretically should translate into a softer oil price path since their resource base is large and they would not want to encourage alternatives to come in or other forms of non-conventional oil.

ON THE OTHER HAND, the rest of OPEC has on average, except for Libya, larger populations and more importantly a smaller oil resource base. They are naturally price hawks and from the standpoint of natural resource economics, rightly so. Every barrel they pull from the ground today is worth more to them than a barrel produced by Saudi Arabia – thus the eternal OPEC dance at their meetings where they try to reconcile the irreconcilable.

Making matters worse for both groups is the extent to which fuel is subsidized. The table below shows that it starts at just over 50% for Ecuador and tops 90% for Venezuela. These rates are unsustainable in the long run. They drain public coffers but more importantly they do not target the segments of the populations that need the help. Instead, they tend to help the rich more than the poor. The table also shows that there is not much difference between the resource rich countries and the resource poor countries when it comes to fuel subsidies. They are both consuming more and more of their oil leaving less and less for exports thus further putting pressure on the need to produce more and putting downward pressure on oil prices.

IN THE END, GOPEC never materialized but the Arab Spring may have changed the geopolitics of oil such that oil producers will look for natural alliances to further their interests. GOPEC may be one of them. If so, the upward pressure on oil prices will be reduced. The rest of the oil cartel will also look to safeguard their interests but given the lack of their economic diversification, will be relying more and more on a dwindling oil resource and needing more revenue. All of this will further amplify downward pressures on prices. Market share as we have seen will be the norm again as we experienced in the 1980s. However, all of this is subject to events in the Middle East as well as the demand side of the oil market. Asia in particular and the rate of economic growth in the industrialized world will further shape the outlook on future oil prices.

In the end, whether GOPEC becomes a reality or not does not matter. Both the resource “rich” countries of GOPEC and the rest of OPEC face drastically different goals. This will spill over into the wider market and in all likelihood will tamper the rise of oil prices. That is on the supply side. Oil has now become a financial asset like any other, so bets on it are done by a multitude of investors and hedge funds are adding to its volatility. It does not change the fundamentals of the supply side, however. When it comes to the role of the oil cartel in global oil markets, it is never realistic to call for its demise. It has survived longer than anyone predicted. But population pressures and the Arab Spring may have changed the geopolitics of oil enough to assume that the battle for market share will continue.

The views expressed are the author’s own.