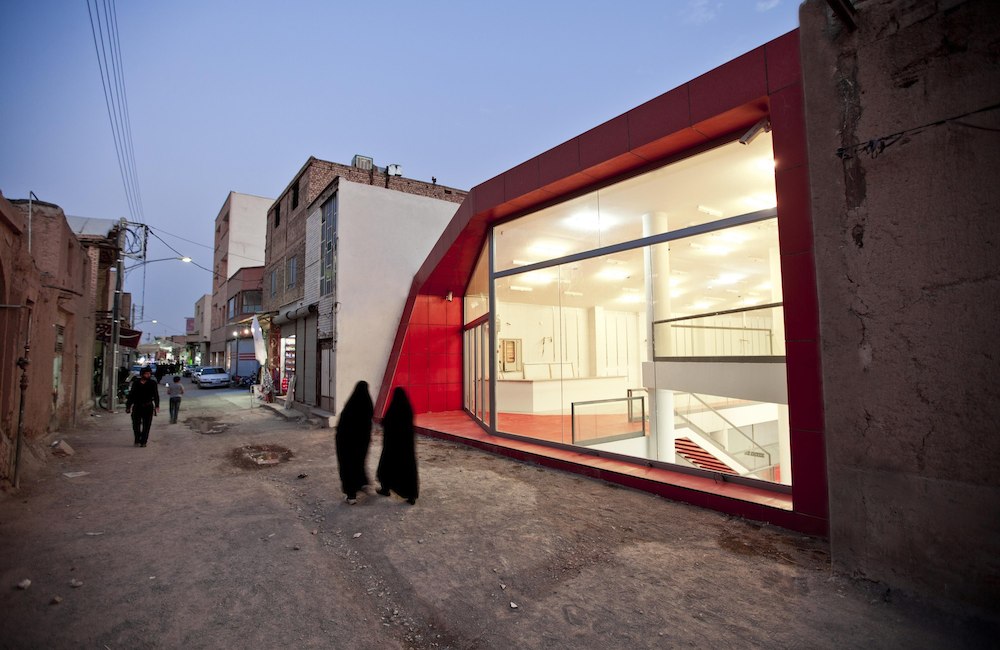 "While Khamenei criticizes 'parks' and 'high-rise buildings' for being 'fundamentally un-Islamic', he seems to be quite fond of other modern/Western phenomena from smoking pipes to long-range ballistic missiles," writes Mojtaba Nafisi in this thought-provoking essay.

For the past three decades, Iran’s post-revolutionary regime has tried to infiltrate its polarizing political discourse of self and other onto architecture. The binary categories of (Islamic) traditions of architecture versus (Western) modern architecture are reconstructed to symbolize the political struggle between the Islamic state and its ideological enemies. Interestingly, Iran’s most important political crisis since the 1979 revolution, which led to the formation of the Green Movement, was initiated in the debates between two presidential candidates of the 2009 elections: Mahmud Ahmadinejad, an urban planner who insisted that he is an “engineer,” and the opposition leader, MirHossein Mousavi, an architect, who saw himself more of an artist (see sample artworks here).

While for 35 years, the regime has forced Iranian women to cover their body and hair, it has been less successful to dictate its patriarchal desires onto space. Yet, the recently issued fatwas (here) by two prominent jurists, including Iran’s Supreme Leader, Ali Khamenei, show that the regime has not given up its claim for space. Although the director of Khamenei’s Office for Religious Inquiries later denied the Ayatollah’s association with the fatwas, all other facts suggest otherwise. First, the “Center for the Study of Science and Technology of the Islamic Iranian Architecture and Urban Planning,” which had published the fatwas, has close ties with the Supreme Leader’s office and thus would not risk faking a matter of such importance.

“For centuries, the spatial layout of house design in Iran reflected the patriarchal structure of the society”

Quite expectedly, those in charge of gathering the fatwas never got punished for forging a lie against the Supreme Leader, a common acquisition in Iran’s judiciary system. Also, while the Center had initially released the exciting news that “the Supreme Leader’s religious office” had finally answered their inquiries, it ascribed the fatwas to the “Supreme Leader’s Office in Academia,” once confronted with the denial.

Whether or not the Supreme Leader’s Office in Academia was responsible for the fatwas or his Religious Office, and regardless of the content of such fatwas, the inquiries have reintroduced questions about the limits of religion in Iran’s intellectual sphere: What expectations from religion are considered legitimate? Does Islam claim to answer all human problems? What is the outcome of religious interference in humanities, science, and technology?

The fatwas were published in response to 32 questions, posed by, as the Center claims, “a team of engineers, researchers, and clerics.” The questions cover a wide range of architectural discussions from morphology, spatial organization, urban regulations, building orientation, urban planning, and design process to small scale issues, like ornamentation, furniture, and even acoustics. While the Center claims that their team of experts had spent two years on developing the questions, the list shows no sign for discussions of neither global architectural concerns, like issues of energy and sustainable design, nor immanent matters that Iran’s construction practices is facing, such as unbalanced urban growth and earthquake threats. They rather show concern on matters that are, let’s just say, irrelevant; one question actually asks “are male architects allowed to design spaces for women?”

Yet, the most problematic issue about the questions is its choice of respondent. To expect response on detailed architecture and urban planning codes, like “the optimum height for guardrails” from a mufti is unprecedented. No wonder only two jurists replied. Among the two, the Grand Ayatollah Makarem, in 23 questions (out of 32), avoids a direct answer. Ayatollah Khamenei, however, shows more interest in the issue and his responses are 6 times more elaborate than those of Makarem.

KHAMENEI quite often cites the Quran and Hadith, but he also refers to the description of the prophet’s house, the remains of a house owned by Mulla Sadra, the 16th century Islamic scholars and philosopher, Iran’s traditional architecture, and natural sciences, as the source for his responses. For example trying to justify his claim about the optimal space orientation, Khamenei states that “laying towards Mecca is biologically the best position to sleep.”

Paradoxically, Khamenei, who leads an Islamic state, sounds more like an opposition leader when discussing issues of space management and design. In a state that claims its legitimacy is rooted in religious authority, and with shari’a laws embedded in its legislative processes through various institutional mechanisms, one would expect that the architecture and urban regulations automatically share the divinity that Khamenei asserts for his power. Nevertheless, the Grand Ayatollah has a critical approach towards the built environment of the country that he has ruled in the past 34 years (including the 8 years that he served as the president). The statement that “as long as the issue is legal, it is permissible,” only appears once in Khamenei’s responses.

Iran’s Supreme Leader, who enjoys presenting himself as a renaissance man, well acquainted with poetry, music, and literature, takes a simplistic stance on architectural form by considering it a mere matter of identity. Similar is the case of religion, which for the Grand Ayatollah is more about distinguishing the self from the other. And when religion becomes a source of identity, faith and inner spirituality become secondary to form and representation. No wonder why Khamenei claims that “our people’s contemporary garments are un-Islamic.” The same logic governs his view towards architecture because for him architecture is a cover (or hijab) for life. In his responses, Khamenei is unable to conceal his concern about women being “seen” or even “heard” in architecture and urban spaces. With such a patriarchal analogy, it is not a surprise to read that “open kitchens,” for Khamenei, share the same indecency and audacity of “bihejabi,” i.e. being unveiled.

When in his later speech for Tehran’s municipality and city council members, Khamenei declares that, “the architecture and city scape of Tehran has nothing to do with the appearance of an Islamic city,” his understanding of architecture, as the cover for life, gives away his real concern: the fact that, as he has stated in his fatwa, “our contemporary sabk (style) of life, from top to toe, is un-Islamic.”

“…faith and inner spirituality become secondary to form and representation”

While Khamenei criticizes “parks” and “high-rise buildings” for being “fundamentally un-Islamic,” he seems to be quite fond of other modern/Western phenomena from smoking pipes to long-range ballistic missiles. This paradoxical approach gives away the fundamentalist mentality that Khamenei tries to hide; a mentality that was previously shared by a young architect, named Mohammad Atta. In his Master’s thesis of city planning, from the Hamburg University of Technology, Atta criticized the imposition of modern high-rise buildings for disfiguring Islamic cities. In his urban plans to preserve the old quarter of Aleppo, Syria, Atta, similar to Khamenei, articulates Islamic architecture as a style that is threatened by Western architecture. In the ideal Aleppo that Atta renders, women are excluded from the public space and retained in the veiled architecture of their houses.

If the similarities between the architectural ideas of Khamenei and Atta are more recognizable than its significance, let me remind you that Atta is not acknowledged for his architectural thought; he is rather known as one of the ringleaders of the 9/11 attacks.

KHAMENEI’S denial about the fatwas, however unbelievable, is therefore quite a relief. While, through a maximalist reading of Islam, the religious authorities in Iran insist on what they call as “Islamization” of life, education, science, and humanities, this denial shows a partial withdrawal. Iranian clerics have for more than three decades suggested that Islam has the answer to any question, even high-tech marine technology, as one of Iran’s prominent religious scholars believes, can be learned from the story of Noah. Islamization of architecture and urban planning is however a new agenda. Mohsen Qara’ati, a mid-level but popular cleric, as the keynote speaker for the 5th National Conference of Urban Development, held in February 2014, 6 months after the fatwas were issued, states,

“Islam is a comprehensive religion that offers architecture and urban principles… Islam is a complete religion; it has an agenda for all human affairs… I have been able to identify 800 verses in Quran that discuss the conditions and regulations for an Islamic city”.

While the fatwas could accelerate the institutionalization of the regime’s desire to Islamize architecture, the Ayatollah’s cold responses and Khamenei’s later denial brings hope to those who fear the harm that the marriage of religion and engineering can bring to both sides.