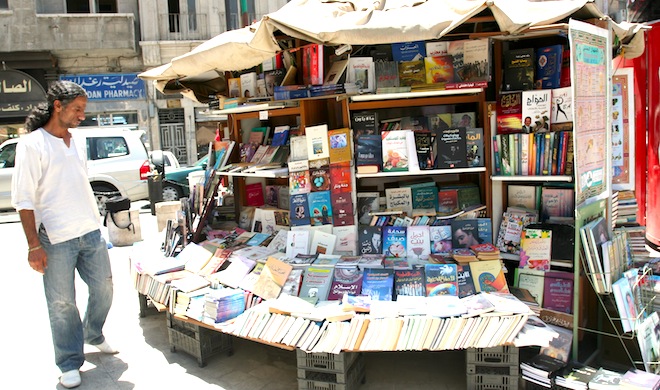 Arabic literature blogger "Arablit" shares her selection of books to read in early 2015.

The Book of the Sultan’s Seal: Strange Incidents from History in the City of Mars, by Youssef Rakha, trans. Paul Starkey. Interlink.

A ground-breaking title. From the publisher:

It’s hard to imagine a debut more thrilling than Youssef Rakha’s groundbreaking The Book of the Sultan’s Seal. The novel is made up of nine chapters, each centered on a drive our hero, Mustafa ÇorbacÄ±, takes around greater Cairo—city of post-9/11 Islam. In a series of visions, ÇorbacÄ± encounters the spirit of the last Ottoman sultan and embarks on a mission the sultan assigns him. ÇorbacÄ±’s trials shed light on the contemporary Arab Muslim’s desperation for a sense of identity: The Book of the Sultan’s Seal is both a suspenseful, erotic, riotous novel and an urgent, unparalleled examination of accounts of Muslim demise.

I’m still not entirely sold on the English title, but a great book in great translation:

Najwa Barakat’s Oh, Salaam! tells the story of three friends—an explosives expert, a sniper, and a torturer—whose lives are transformed by their involvement in a civil war in an unnamed Arab country, and by their relationship with the novel’s anti-heroine, Salaam. Two of the friends live to see the end of the war but struggle to survive the arrival of peace and to make a life for themselves in a society that has no use for ex-paramilitaries. As the characters seek to find love, make it rich, or get out of the country alive, they use and torment each other, revealing the ultimate consequences of war and gender violence in a “city that no longer resembles itself.”

What more do you need to know than that another Elias Khoury novel is coming, in translation by H. Davies? From the publisher:

Nasri is a pharmacist in Beirut who lives alone with her two children, Karim and Nassim. The first, a medical student, is active in leftist circles under the nom de guerre “Sinalcol” (a nickname derived from “alcohol-free” in Spanish), while the second is Phalangist. The two brothers are in love with Hind, who is enamored of Karim. But eventually, after the departure of the latter to France, she marries Nassim. Their history is born of other stories that intertwine to form an imposing fresco of Lebanese society over the past fifty years.

Another civil-war novel from Jaber, whose beautifully translated Mehlis Report was underappreciated in English.

The sophomore effort of the author of the fast-paced, fun Corsair. From the publisher:

Oblivious to the invasions, massacres, and religious fanaticism that characterize the fifteenth century, a young girl falls in love with a noble Arabian tribal leader. But all eyes are on the Portuguese fleets in the Arabian Gulf, intent on securing the profitable spice trade.

Abdulaziz Al-Mahmoud weaves a tapestry of momentous historical events with stories of love, honor, and nobility, while guiding us around the medieval world of Lisbon, Cairo, Jeddah, and Istanbul.

The Holy Sail brings to life a neglected episode of history that impacted not only the region but the world for centuries to come.

From the author of the darkly humorous The Grub Hunter and French Perfume, a novel about disease from a physician-author. From the publisher:

Louis Nawa left the hospital, still wearing his inpatient’s gown, which covered only the top half of his body, leaving the bottom half naked but for a thick coat of body hair, a few mosquito bites and a wealth of lesions left by Ebola, which were now beginning to heal over.

The streets were dusty, baking in the midday August sun… Ebola’s tragic victims were evident all around. With no one left to carry them, they crawled alone to the main square in the hope of finding help. Louis, meanwhile, was completely oblivious to his bare feet, already blistering as they pounded the baking road. Any feeling – including that of a guilty conscience – had been entirely deadened by the bottle of wine he had guzzled.

Consorts of the Caliphs: Women and the Court of Baghdad, ed. Shawkat M. Toorawa, trans. the editors of the Library of Arabic Literature, by Ibn al-Sai. NYU Press.

The LAL editors have been talking this up for some time. From the publisher:

Consorts of the Caliphs is a seventh/thirteenth-century compilation of anecdotes about thirty-nine women who were, as the title suggests, consorts to those in power, most of them concubines of the early Abbasid caliphs and wives of latter-day caliphs and sultans. This slim but illuminating volume is one of the few surviving texts by Ibn al-Sai (d. 674 H/1276 AD), and the only one to survive in its entirety. Ibn al-Sai was a prolific Baghdadi scholar who chronicled the academic and political elites of his city, and whose career straddled the final years of the Abbasid dynasty and the period following the cataclysmic Mongol invasion of 656 H/1258 AD.

In this work, Ibn al-Sai is keen to forge a connection between the munificent wives of his time and the storied lovers of the so-called golden age of Baghdad. Thus, from the earlier period, we find Harun al-Rashid pining for his brother’s beautiful slave; al-Wathiq falling for a slave who belonged to one of his other slaves; and the artistry of such musical and literary celebrities as ?Arib and Fadl, who bested the male poets and singers of their day. From times closer to Ibn al-Sai’s own—when Abbasid authority was trying to reassert itself and Baghdad was again a major center of intellectual and religious activity—we meet women such as Banafsha, who endowed law colleges, had bridges built, and provisioned pilgrims bound for Mecca; slave women whose funeral services were led by caliphs; and noble Saljuq princesses from Afghanistan.

Informed by the author’s own sources, his insider knowledge, and well-known literary materials, these singular biographical sketches, though delivered episodically, bring the belletristic culture of the Baghdad court to life, particularly in the personal narratives and poetry of cultural heroines otherwise lost to history.