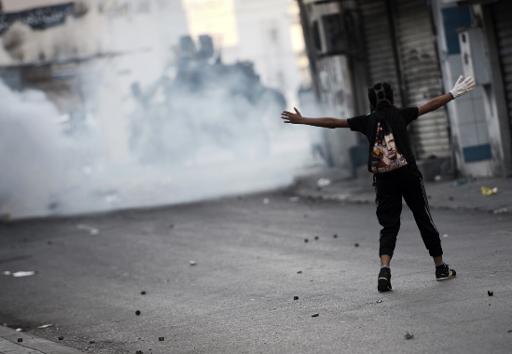 Predominantly Shiite Iran, across the Gulf from Washington’s ally where the US Fifth Fleet is based, has joined calls for the immediate release of the kingdom’s main opposition leader Sheikh Ali Salman.

And the United States has expressed deep concern about Salman’s detention, warning that it could only inflame the persistent violence that has gripped the kingdom since 2011.

The witnesses said Thursday’s clashes erupted in central Manama after prayers at the capital’s Mumen mosque, whereas previous unrest has centred on Shiite villages in the suburbs.

Police used tear gas and batons against the protesters, and some injuries and arrests were reported.

“Dozens of people… including women and children, were arrested,” said a statement from the Bahrain Observatory for Human Rights.

Salman, 49, heads the Al-Wefaq movement. He was arrested Sunday and charged the next day with seeking to use force to change the regime.

The prosecutor said Salman had been questioned again Thursday, and confronted with recordings he had made. It said his lawyers had been present, and that Salman had also been allowed a visit by relatives.

In one recording, Salman tells of how, while abroad, someone proposed to him “militarising” the opposition movement, a proposal he rejected.

The prosecution did not explain why it highlighted this incident, which could undermine its assertion that he was seeking a violent overthrow of the regime.

Meanwhile, the interior ministry announced that it had banned an opposition demonstration called for Friday in a Shiite suburb of the capital.