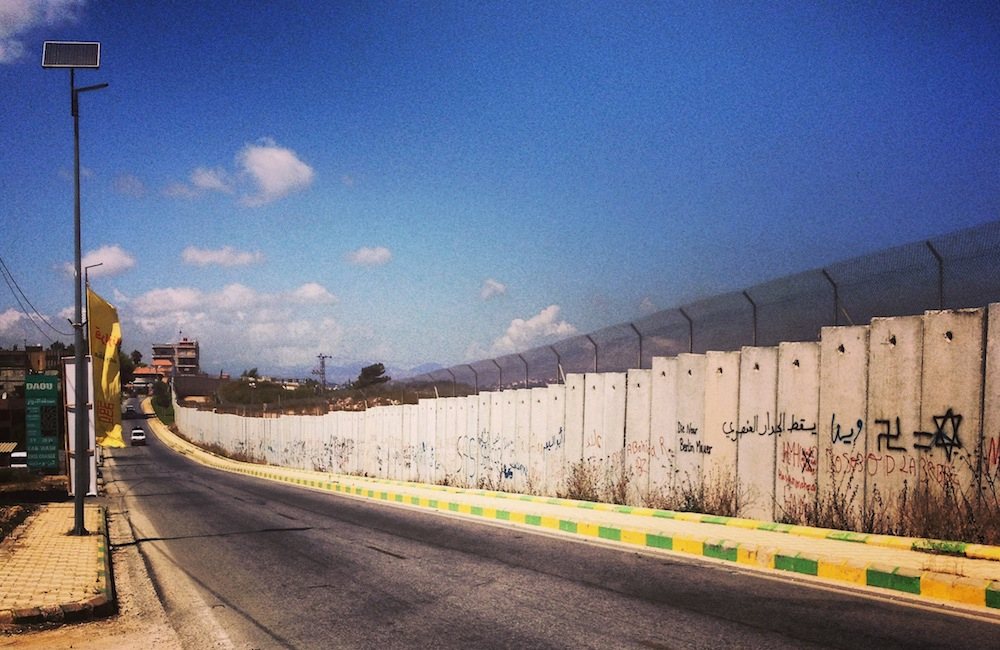 4 stops. 1 blogger. 1 camera. Follow Farrah Berrou on her short but epic journey in disputed territory at the heart of the Middle East.

A Crusader castle from the 12th century, Beaufort has been under-appreciated and neglected for decades. Up until recently, the castle was on the verge of entire ruin, slowly but surely becoming part of the mountaintop that it sits on at the edge of the village of Arnoun. Kuwait has generously stepped up to the plate to fund the renovation of the castle, salvaging what is left of the strategically placed structure that was also used as an Israeli look-out post and suffered earthquakes, historic battles, and heavy shelling in the 80s.

ITS ARABIC NAME means “Castle of the High Rock”, sha2if being Aramaic for “High Rock”. The Israeli bunkers are still there and if you climb into them, you will understand why this was such a perfect location for surveying the area of Southern Lebanon & Northern Israel. The castle overlooks the entire valley around the Litani River and the views are nothing short of spectacular. Although this place doesn’t seem to be promoted as a tourist site, a tour bus pulled up on the first day of Eid while I was making my way to the top of the tower so maybe word is getting around. Definitely worth another visit in the springtime. Another blogger visited a few years back and has some more details on its history, you can check that out here.

The border cuts through the Israeli town of Metula and the Lebanese village of Kfarkila, home of Fatima’s Gate. Driving along the greener part of the border away from the fence, you can get a full aerial view of the apple orchards in Metula.

A resort vacation town with a line-up of model homes that resemble the Californian cliffs of Newport Beach, it is a Jewish settlement whose founders were mostly Russian immigrants. Continuing up the mountain, you see the border to the city known as Kiryat Shmona, a place Sayyed Hassan Nasrallah mentions in his speeches every once in a while. Kiryat Shmona used to be a bedouin village but is now home to a population of Jews of Moroccan descent, one-third of which is under the age of 19.

Ghajar is an Arab village on the Hasbani River on the southern Lebanese border with the Israeli-occupied Golan Heights. Essentially, this town has been “owned” by Lebanon, Israel, Syria or all three at different points in time. The population of some 2,000 are mainly Alawite, or “followers of Ali” – a branch of Shiite Islam with the greatest following in Syria. According to some southern Lebanese, Ghajar never used to be a town. A group of nomadic people had set up camp in the area and eventually formed roots there and that’s where its name originates from. Ghajar refers to the nomadic gypsies or bedouins.  I find it quite amusing that they decided to become permanent residents on a slab of land that is located on a tri-border. The northern half of the town is in Lebanese territory and the southern half is in Israeli territory while the population considers themselves Syrian. The residents have both Syrian and Israeli citizenship.

You can drive all the way up to the outskirts of the town but you’re not allowed in. The road is blocked by the Lebanese Armed Forces and UNIFIL. As you get closer, they inquire if you’re lost because this road is blocked and leads to Israel. Their smile is their way of telling you to u-turn because you’re at the end of the line. Ironically enough, the Lebanese men guarding the perimeter are not allowed within the town either.

Prior to the Liberation of the South in 2000, this border was open and many Lebanese entered Israel looking for jobs and benefited from Israeli services (mostly medical). This was known as the “Good Fence Crossing” and allowed for export of goods from the Israeli port city of Haifa. After the Israeli withdrawal, the border was closed off. Good Fence Crossing became Fatima’s Gate after an injured woman who was on the border was asked “what’s your name?” upon being taken to a hospital in Haifa. Her name is actually Souhad and she was too afraid to give her real name to an Israeli.

The fence used to be just that; transparent and harmless with barbed wire at the top. You could see the look-out posts as you walk by and you could wave to the Humvees that drove along it every hour. A few years ago, large sections of concrete wall replaced the fence only within the town of Kfarkila creating a mini version of the Apartheid Wall in the West Bank. It was erected because of tensions in this particular part of the border. The wall has poor graffiti done by youngsters based on content, talent, and height. I smell an opportunity for an exhibition here – much like the graffiti on the wall of Palestine.

This article is an updated version of an earlier blog post that appeared on Farrah’s blog. Her visits to the locations mentioned took place about 14 months ago.