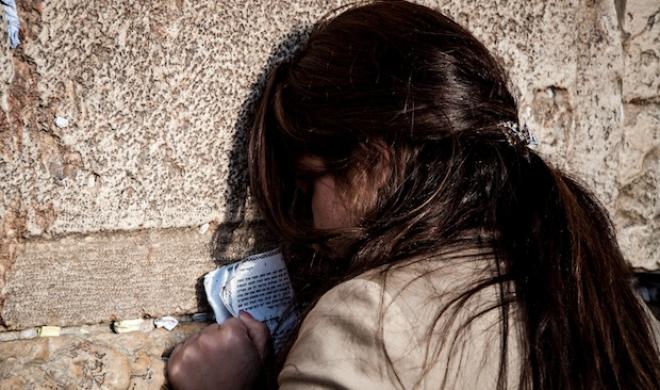 Black scarves, mens-only commercials, and no mobile Internet. Naava Mashiah travels to the 'IsraEL' of 2023 and discovers a grim future. (Editor's note: this is a fictional portrait).

It was my first visit to Israel since 2013. Ten years had past. It was now 2023 and the sign at the airport was titled Welcome to IsraEL. The second vowel was capitalized to emphasize the word ‘EL’, which means God in Hebrew. When the aircraft circled Bennet Airport one could see the armor sheath that surrounded the compound in a circumference of six kilometers around the airport. It supposedly incorporated innovative technology that could repel missiles.

In the passport control, the booths were separated into Jews and non-Jewish lines. All the Jewish female arrivals were presented with two small candles in a plastic bag with a printed blessing for shabbat. This was to ensure that all females blessed the shabbat on Friday evening.  It was now the law for all the Jewish households to light candles and place them in a front window of their home.

“In the passport control,
the booths were separated into Jews and non-Jewish lines”

Leaving Bennet Airport with my plastic shabbat package in hand, I headed in a taxi towards the Judean Hills and the united capital of IsraEL: Jerusalem. As we passed Latrun the traffic slowed to a snarl. I asked the taxi driver if there was an accident or occurrence. He shrugged his shoulders and explained that this is very common ever since the Defense Ministry installed the extra gate to the capital. Each vehicle was belted through a tunnel which was really a computerized scanner identifying the passengers and any explosives/weaponry. It was sophisticated enough to scan the brain waves of the passengers to identify any risk potential or hostility.

There was a male choir singing a cappella on the radio. “Is that a new choir?” I asked the driver. “I do not recall this music?”

“Well, you know we cannot have female voices on the radio anymore…where do you live? This has been the law since Minister of Religious services Dani Dayan outlawed any female voices in public or official ceremonies,” he said.

There was another stop after we exited the tunnel and dark scarves were distributed to all female passengers heading towards the holy city. I took mine and carefully placed it in my lap.

“Since when are all the highway signs solely in Hebrew? I remember when there were three languages on the signs!”

“Ah, that took place after the elections in 2015 when Naftali Bennet took a surprise win of the elections after Netanyahu dissolved the Knesset in 2014,” the driver explained. “This is nothing,” he continued, “he unilaterally annexed the territories in 2017. Those who did not want to become Israeli residents were transferred out. Some Christians chose to convert to Judaism as much as the Jews converted to Christianity during the Reconquista in Spain. This truly thinned out the minorities in the region. Although it is still the safest place for Christians in the Middle East after the partitioning of Syria and Iraq to three regions respectively.”

“Not much of an inclusive Israel,” I said quietly to myself. The driver overheard: “Dirballek, you are pronouncing it wrong! It is israEL.”

“Walla, do not worry your pretty head. Minister of Infrastructure Herzog installed more highways. More terrain was ripped and stripped in order to put in more roads strictly for Palestinians. This separation in roads is meant to reduce friction between Jews and Arabs and remove checkpoints. They are great highways. Sometimes even I take them on Shabbat since highways are closed in Jewish areas.”

I NOTICED as we climbed higher to Jerusalem, all the street lamps were decorated in blue and white lights shaped in menorahs although it was not any particular holiday. There were only male faces on the billboards on the side of the highway. I suppose that was also under the laws of the Minister of Religious Services; strictly male visages in order not to tempt any drivers.

“So, how many children do you have?” the driver inquired.

“Why do you ask me such a personal question?” I was astounded.

“What do you mean personal? This is the concern of all citizens! Don’t you know that Minister of Demographics Tzip Livni is subsidizing families for reproduction treatments? We are all trying to reproduce as much as possible and have multiple kids. Each family gets incentives to have larger families…Jewish families.”

“You are kidding me!” I was aghast.

“Also same sex marriage has been abolished since 2018 and mixed ethnic marriages have been dissolved. Where have you been, hamudale, my sweet?!”

Wow, that is harsh! I thought to myself.

“Are you Jewish?” the taxi driver continued.

“Why are you asking me this question?” I was now getting suspicious.

“Well, if you are and you can prove it, then you can participate in the ‘Jew in Holyland’ project for six months. This is a rotational shift program for Jews in diaspora whom do not want to live permanently in IsraEL, but want to strengthen the robust population. You see, we have to keep the population above 87% Jews according to UN resolution 678. They feel guilty so they come for six months and return back home. It is like giving a donation in the past.”

“Well, I’m exempt since I lived here for 18 years before,” I smuggily answered.

“Good for you. It is impossible anyhow to prove you are Jewish…acceptance to Judaism became more arduous and burdensome as one had to prove three generations back Jewish genealogy.”

In order to change the subject to a lighter topic I asked him about the economy.

“Well, the Start Up Nation fizzled since investors from USA were PRessured by their own governments whom disagreed with IsraEL’s extreme policies. They conditioned all the private sector to exit the R&D centers to Detroit to rejuvenate this bankrupt city. This was the condition. They also were not comfortable with the proximity to the extreme jihadists imploding over the border.”

“The US citizens whom were once arriving by droves were not allowed to move to IsraEL. They had to choose between giving up their US nationality. The CIA and FBI kept a close call on visitors with dual citizenship since they were afraid of spread of religious fundamentalism upon their return to USA. This tore some families apart who could not meet as frequently as before. Plus the military aid of 2.5 billion USD ceased to arrive after the Gaza War in 2016.”

“What about property values?”

“Don’t ask!” he sighed. “Remember all those European Jews whom arrived from the beginning of 2000 to take advantage of ‘NO income Tax’ for ten years?!

Well, that law was revoked in 2016 which meant that all the real estate market, kept artificially high for a decade, finally collapsed.”

“We are approaching Jerusalem now,” the driver said somewhat anxiously. “Turn off the Internet and mobile data. It is not allowed in this town. Quickly. It is forbidden by law. There is a curfew, don’t forget by 18:00 you must be indoors and do not forget the shabbat police. There are droves of them and if they catch a house without shabbat candles or a woman not dressed conservatively there’ll be a huge fine and potential deportation for you.”

“How do people live here anymore? What happened to freedom of choice?” I begged for a response.

“Well, there is still the coast…don’t forget. A zone of cafés and skyscrapers. HILONIM it is called. But mostly the people who live there go abroad. The law in 2021 by Minister of Tourism Moshe Kahlon demanded that they leave a deposit of 20K NIS which is reimbursed after their return. But Mamale, most of them forfeit it and never come back.”

“Where do you think they ended up?” I inquired as I was wrapping the black scarf around my head and shoulders.

This is a fictional portrait written by Naaava Mashiah.