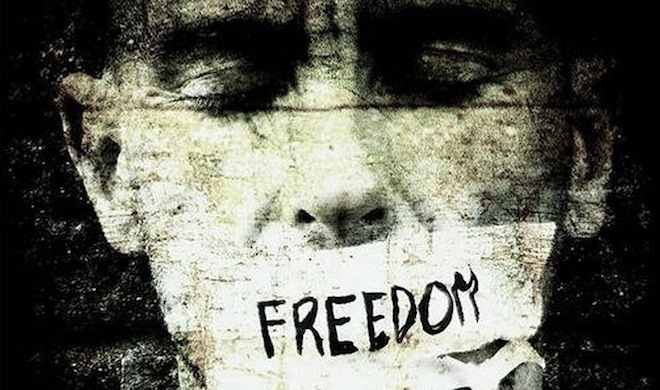 Prominent Moroccan atheist Imad Iddine Habib has spoken out about the difficulty of leaving Islam and of the ‘betrayal’ of the secular Left, both in the Arab world and in the West.

“Morocco seems like a liberal country to those in the West,” said Habib. “The country has signed UN resolutions on sexual and religious rights, but all in keeping with its own ‘immutable identity’, where people can still be arrested for questioning the King, Islam or political issues such as the Western Sahara.”

Habib founded the Council of Ex-Muslims of Morocco – the first public atheist organisation in a country with Islam as state religion – an act which led to death threats and forced him to live in hiding.

Speaking at the Secular Conference 2015 in London, Habib described how setting up the atheist organisation led to criticism not just from religious institutions, but also from Leftist secular groups.

“I found myself fighting on endless fronts: against the pan-Arab fascists; the Arab secular totalitarian regime; anti-feminist secular movements; and Islamism’s apologists on the Left,” he said. “The Left wants votes, so they have to look Islamic.”

Habib added that he had expected more support in the West, but had been disappointed by Liberal and Leftist groups that were reluctant to rally to his cause, in one case even labelling him an ‘extremist’ for his views on religion.

“I have been betrayed by both East and West,” Habib said, adding: “I have lost hope for the Arab and Muslim world. Look at what the region was like in the 1970s. How much progress have we made in 45 years?”

I AM CHARLIE HEBDO. AND THE OTHERS…

The betrayal of the political Left was a common theme at the conference, which was convened to discuss shariah law, apostasy, and secularism in the wake of the Charlie Hebdo massacre in Paris and the public flogging given to Liberal blogger Raif Badawi in Saudi Arabia.

Pragna Patel, a founding member of Women Against Fundamentalism, spoke of how the Left’s desire not to be seen as racist meant it ignored many of the extremist acts carried out in the name of Islam.

“The Left wants votes, so they have to look Islamic.”

Iranian-born Maryam Namazie, spokesperson for the Council of Ex-Muslims of Britain and women’s rights group Fitnah spoke in defence of the satirical French publication, saying that Charlie Hebdo was ‘anti-clerical’ rather than racist.

“Those who condemn the massacre, but blame Charlie Hebdo for offending Muslims have bought into the idea that Muslims are more offended than other minorities,” she said, adding: “There is a long and historical tradition of depicting Muhammed, but it is the fascists and extremists who are thought to represent Islam.”

She highlighted the number of people across the Muslim world who had spoken in support of the staff of Charlie Hebdo, often at great risk. This included two columnists in Turkey who currently face investigation for reprinting the magazine’s cover; journalists in Iran who tried to organise a rally in support of the French publication but were closed down by security forces; and cartoonists in Egypt, Lebanon, and Qatar.

Namazie also paid tribute to the ‘other Charlies’ – many of them Muslims – who had suffered or died in the battle for free speech, such as Mustapha Ourrad, Charlie Hebdo’s copy-editor who was killed alongside his colleagues; Algerian novelist Kamel Daoud, who lives in fear of death for his work; and Mohsen Amir-Aslani, executed in Iran under the charge of ‘innovation in religion’ for publishing booklets which claimed that the story of the prophet Jonah surviving in the belly of a whale was metaphorical.

THE IMPORTANCE OF SECULARISM

The pretext for the murder of Charlie Hebdo staff was its perceived blasphemy, and this charge together with accusations of apostasy is regularly used to silent dissent. In the Muslim world, 19 countries consider apostasy a prosecutable offence, with punishments ranging from fines and exclusion from civil rights to flogging or imprisonment. In 10 countries apostasy is punishable by death, while in both Muslim and non-Muslim countries, extremists often act as self appointed ‘guardians’ of what is said in their communities or wider society.

Speakers at the London conference were united in calling for secularism as a safeguard against the rise of the ‘religious Right’, which had led to infringements of the rights of minorities across the Middle East and elsewhere.

Secularism was also seen as fundamental to securing women’s rights. Imad Iddine Habib discussed how, following the election of the Islamist Ennahda party in Tunisia, there had been a rise in cases of Female Genital Mutilation (FGM) in the country.

Nahla Mahmoud, a human rights activist originally from Sudan spoke about how restrictions on Muslim women had also increased in the UK where ideals of multiculturalism meant criticism of the customs of other cultures was often avoided.

“The purpose of the burqa is to control women, who are seen as fitnah (temptation or sin),” Mahmoud said. “In Muslim countries, we don’t tip-toe around that, we say it. In the UK, it’s debated under the idea of ‘choice’”.

The effect of the rise of political Islam in the UK on women was also discussed by Yasmin Rehman, a researcher and board member of the End Violence Against Women Coalition, who said that the hijab (head covering) had become the “authentic image of Muslim women” in British culture. The symbol of the veil was then fed back to Muslim women in adverts and the media, giving strength to a tradition that many Muslim women chose not to embrace.

THE NEED FOR SOLIDARITY FROM MODERATE MUSLIMS AND THE WEST

Yasmin Rehman said she feared moderate Muslims had “colluded” with Islamists by refusing to criticise extremist doctrine and behaviour.

Rehman is an outspoken critic of extremism from within the Muslim community, a fact that has angered many and led some of her fellow Muslims to brand her a Kafira (infidel). Emphasising her point, she highlighted a demonstration organised by Muslim Action Forum against depictions of the prophet the day after the conference, and said: “The massacre in Peshawar didn’t mobilise them. The massacre at Charlie Hebdo didn’t mobilise them. But tomorrow, they are going to rally against the cartoons.”

However, the work of liberal activists in the Muslim world was not helped by the Western governments and organisations, which continue to ignore human rights abuses.

Ramin Forghani, the Iranian-born founder of Ex-Muslims of Scotland and vice chair of the Scottish Secular Society, highlighted how the international outcry over Raif Badawi’s treatment had forced Saudi Arabia to halt and possibly reduce or annul his punishment.

Forghani said he was disappointed that, unlike Germany and Canada, the UK government had not been vocal in condemning Badawi’s sentence, while choosing to fly flags at half mast to mark the death of King Abdullah. He suggested that the UK muted its criticism of other countries due to trade or diplomacy.

“There are liberals in the Middle East who stand in front of the extremists. But we close our eyes because of oil. In Iran, many people are imprisoned for criticising the regime. But lots of eyes are closed to this due to the ongoing nuclear negotiations. The West should support the opposition in the Middle East; it’s the only way to combat extremism.”

Forghani compared the reform that had to take place in the Muslim world to the long struggle for secularism and against clericalism in Western countries.

“Christianity has gone through all this before. It is time for Islam to go through the same.”