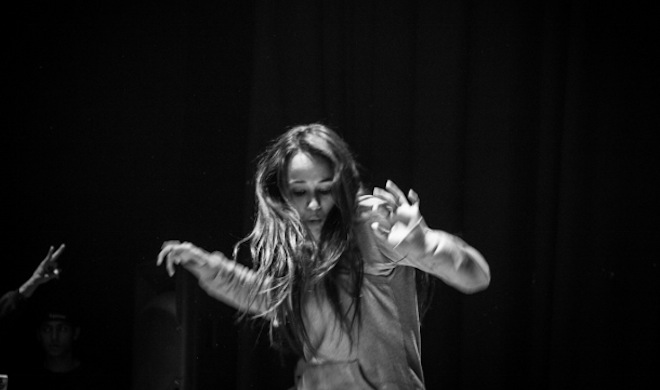 Hip hop arts have spread rapidly among youth in post-revolution Tunisia as a means of criticizing “the system,” amid broken promises and a weak economy.

Backstage at the Beat the Beat hip hop festival in Sousse, Tunisia, on January 10, a dozen or so young men and women with off-kilter haircuts, torn jeans and beanie caps practice windmills and kicks as others look on in the dim lighting. These young people, from teens to mid-20s, are warming up for the break dance battle only minutes away.

Beyond the curtain, locals piled in seats in the Sousse cultural center’s darkened auditorium chatter loudly in anticipation. Most of the artists they’re waiting for come from poor neighborhoods in Sousse or the neglected towns of the interior where Tunisia’s revolution began. Events like Beat the Beat are a chance for them to connect with peers and burn energy otherwise built up whiling away days in cafés with other unemployed youth.

Hip hop arts, once sidelined by the government, have spread rapidly among youth in post-revolution Tunisia as a means of blowing off steam in an environment of broken promises and a weak economy. Music videos like “Houmani” by rapper Hamzaoui Med Amine has garnered 16 million views and pounds from radios throughout the country. The arrest and prosecution of revolutionary artists, like graffiti crew Zwewla, sparked demonstrations outside courthouses demanding their release. Street artists like Karim Jabbari and El Seed combine calligraphy with graffiti to bring color to impoverished interior towns and pride in the nation’s Arab heritage. Yet it has also become a means of directing criticism against “the system,” the political elites many youth claim have betrayed their hopes for a better Tunisia.

Chopper, 28, whose given name is Mohamed, entered the café where we met wearing his trademark black sunglasses, before going into his low-paying day job in a Tunis call center. His head was closely buzzed. Yet his usually well-trimmed goatee had thickened into a full beard. Chopper refuses to give his last name, saying he fears harassment by authorities, after the arrest and prosecution of politically-divisive rappers Klay BBJ and Weld El 15.

Often associated with militant political hip hop crew Armada Bizerta from his home city of Bizerte, Chopper’s raps are thoughtful, often streaked with anger and questions about the society he lives in. He says his mission as a rapper is to paint pictures of Tunisia that confront people with their faults and weaknesses, in order to grow.

Live music at the Beat the Beat festival in Tunisia on January 10. (WNV/Nicholas Linn)

“When we look for a long time at the mirror, we see we’re not so beautiful,” Chopper said, in reference to the criticism he metes out in his music. “You grow up in the ‘hood,” he said, pointing to Tunisia’s many urban ghettos, “and you stay there your whole life. A young kid in the ‘hood has no idea about life outside of it. But I’m encouraging them to climb out.”

Chopper’s song “Batal Btala,” or “Hero of the Unemployed,” off a recent mix tape, speaks vividly of the humiliation and frustration of unemployment. Yet it leaves a spark of hope, singing the praises of those who persevere amid the circumstances.

“I believe in the people at the bottom of the food chain. That’s who I’m rapping about and who I am,” Chopper said.

While his stern, confident — even aggressive — persona can be found throughout his songs and video clips, he’s become quieter in person these days. The recent election of Béji Caïd Essebsi to the presidency, a mainstream politician hailing from the administrations of former presidents Habib Bourguiba and Zine El Abidine Ben Ali, with his Nidaa Tounes party, has left many of Tunisia’s activists and artists frustrated. The course of the post-revolution transition has left Chopper cynical about the possibilities for meaningful change for Tunisia’s youth and the poor.

“Hip hop arts, once sidelined by the government, have spread rapidly among youth in post-revolution Tunisia”

Unemployment rates hovered at 15 percent in the first quarter of 2014, according to official stats, but the number of unemployed not counted because they’ve dropped out of the job search is much higher. Some 34 percent of rural Tunisians live in grinding poverty, according to the World Bank. Young people in poor urban areas complain of regular harassment by police, including torture. Free speech has suffered numerous setbacks since the 2011 revolution that ousted a dictator; on Tuesday a Tunisian blogger was sentenced to a year in prison for defaming the military on Facebook.

Artists wielding spray paint cans and microphones were at the front of the protest movement in December of 2010 and early 2011 that ousted autocrat Ben Ali and two subsequent provisional governments in Tunisia with scathing indictments of the ancien régime’s corruption, violence and neglect of young people. El Général’s now-famous song “Rais Lebled” is said to be the rap that set off the revolt in December 2010. Alternative street art group Ahl El Kahf have dodged police to paint images of the revolution’s martyrs.

“I don’t believe in this kind of protest,” Chopper said, “because after two days, or two months, or two years the people leading the demonstrations are gonna take some money, put it in their pocket, and just tell everybody ‘Go home. It’s time to stop everything.’”

As for those at the head of Tunisia’s political establishment, he thinks little better. “Politicians have been working their whole lives to get to this point,” he said with a bark, “just so that they can fuck us.”

A young girl break dances at the Beat the Beat festival in Tunisia on January 10. (WNV/Nicholas Linn)

Yet while fellow hip hopper Bouthîena El Alouadi, who goes by the name Medusa, also feels disappointed in the political environment four years on, she is more optimistic about hip hop’s potential to unify and advance struggles.

El Alouadi, 23, is an internationally acclaimed dancer and rapper. She started break dancing and rapping as a teenager, inspired by her brother and uncle, both hip hop artists. But it’s quickly grown into more than that, she said.

“Some 34 percent of rural Tunisians live in grinding poverty”

Growing up, El Alouadi said she heard, “too many male rappers insulting women in their songs,” pointing out that she’s made it her mission to give a voice to Tunisian women in a genre dominated by men.

“I aim to influence younger women in their early teens, to show them that we can be strong too,” El Alouadi said, pointing to the pressures on young women in Tunisian society that perpetuate gender inequality.

Women were at the front of protests against Ben Ali’s government since the very beginning of the uprising, first in Sidi Bouzid, where the uprising began. Since then, numerous significant militant activists and human rights campaigners, like Radhia Nasraoui, a lawyer and wife of a recent leftist presidential candidate, have become household names. Others, like Lina Ben Mhenni, an activist who wrote on social issues under Ben Ali’s rule on her well-known blog A Tunisian Girl, have become media icons even in the West.

A break dance battle at the Beat the Beat festival in Tunisia on January 10. (WNV/Nicholas Linn)

Gender-based violence is common, with nearly half of adult women experiencing it at some point. In rural and interior regions of the country, poverty rates for women are sky-high and there is low female representation in political parties and administration.

El Alouadi related one instance in which her hip hop advocacy for Tunisian women was met with violent reaction. After the former ruling Islamist party Ennahdha was elected to head the government, it ordered doctors not to administer abortions in hospitals. With the help of a local NGO, she said, “I helped organize a flash mob demo against the new laws in Tunis, where I sang a song about the issue. But in the middle of the demo, Salafists physically attacked us.”

At a recent hip hop competition in Jordan, El Alouadi rapped about women, dancing comfortably on stage. Afterwards, a government minister called her “an extremist,” and “gay.”

“I don’t mind: This means my message is hitting where it matters,” she said cheerfully. “I’m not afraid to be who I am.”

But it is not only criticizing society or “the system” that makes hip hop a tool for change, El Alouadi is careful to add. She cites her song “Hold On,” which pushes for unity among Tunisians, and particularly the fractious hip hop community. Unity, she said, in order to regain the popular strength of the heady days of protest in 2011. Warning against the power of “the politicians,” she chants, “They divide us to better rule us.”

—
Sam Kimball is a freelance journalist covering the Middle East and North Africa. He has worked from Yemen and Egypt, and is currently based in Tunis, Tunisia, where he is conducting master’s research on hip hop in the Tunisian Revolution. Sam speaks Arabic, French, and English. This article originally appeared on Waging Nonviolence.