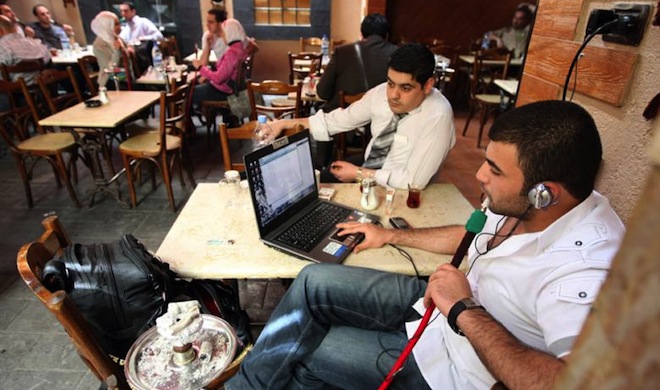 You see them all over the Internet now: gruesome displays of Syria's war. Dr. Uğur Ümit Üngör sets out on a difficult but important discussion about how to face these clips.

The Syrian uprising and ensuing civil war have seen an unprecedented proliferation of visual material. We can safely argue that Syria is the first conflict ever that is broadcast online in real time. These war clips range from short videos containing battleground shootings between armed groups, to carefully constructed reports of entire military campaigns, from planning to execution and aftermath. The worst cases are recordings of violence that can be considered crimes against humanity: security forces dispersing demonstrations through shootings and beatings, the torture of activists, mass bombardments on residential areas, and finally, individual as well as mass killings of defenseless human beings. These kinds of shots are of fundamental importance for studying mass violence and the role of perpetrators therein; first of all, because this type of footage is rare and often unique, and second, because those who commit the crimes are prominently visible.

How can we unravel, examine, and systemize the cacophony of images produced by the Syrian conflict, in order to analyze the content of these videos in a way that is intellectually and ethically responsible?

First and foremost, watching violent footage is an academically legitimate form of doing research. Only by studying this kind of footage can we register evidence, record witness accounts, chart how individual perpetrators operate, and understand how a process of mass violence functions and unfolds in practice. In our Master’s program “Holocaust and Genocide Studies” at the University of Amsterdam and the NIOD Institute, I regularly confront students with explicitly violent footage. I explain to them that detached observation is the only way that leads to a better understanding of the perpetrators, because for most cases of genocide, we hardly have any footage. For example, of the genocides in Cambodia, Guatemala and Darfur, we have nothing; there is only one proper video of the genocide in Rwanda, and only several dozens of recordings of the wars in Yugoslavia.

In other words, since there is scant material in general, we should “appreciate” that there is so much available on Syria. Any selection of useful materials for viewing, showing, and analyzing must be based on at least three criteria. First, the footage should not contain unnecessary graphic scenes. Second, the source has to be relatively trustworthy. Third, the recordings have to be instructive and informative. Following the advice of the Dutch sociologist Abram de Swaan, we have to “keep looking”, despite our instinctual responses to avert our gaze.

How can a person endure watching a video in which people are beaten to death or killed in another violent way? An important risk this type of research carries is that the researcher’s emotions can interfere with the analysis. The analyst can develop a sense of empathy with the victims and become “infected” with their emotions: pain and grief concerning the rationale behind the violence, fear of an unsafe world, and feelings of anger and revenge towards the perpetrators. Although this is understandable and sometimes even necessary, for example in order to sustain one’s own sense of justice, these powerful emotions generally obstruct a fundamental understanding of the violence.

Ideally, researchers of violence should observe execution videos in the same way a surgeon inspects a gaping wound – for most people either an “abominable” sight (physical response), or “sad” for the “poor” victim (emotional response). Conversely, the surgeon clinically observes the structure of the tissue, attempts to understand which steps need to be taken, what parts he has to either remove or stitch back together. So too the researcher should ask the questions: how can we identify the social structures, interactions, fantasies, and emotions embedded in such video clips? What meaning do the perpetrators attribute to their acts of violence, and why? And what does this add to our existing knowledge of mass violence?

This type of research has many pitfalls: sometimes the conversations are inaudible or incomprehensible, occasionally with inaccessible jargon or a dialect, and at times the recordings are created and uploaded by someone directly involved in the violence and the images quickly disappear from the Internet. The technical details of the who/what/where are also vitally important: military insignias, exact locations and physical environment, names and surnames of the visible individuals. Most videos have to be viewed several times in order to really make sense of them. Some videos only became clear to me after I had been watching them in the company of others – for example during a lecture or in class – despite the fact that I had already viewed it several times before. The group discussions were particularly insightful because everyone would notice different aspects of the video.

In West Damascus, perched below the Alawite neighborhood Mezzeh-86, stands the large concrete building of the Syrian Ministry of Information. Since 2011, this ministry has been combating the Syrian uprising through large-scale propaganda campaigns, combined with an increasingly tightened censorship. Ever since, the official state-controlled media such as Sana, Suriya and (the privately-owned but pro-Assad) Al-Dunya TV have desperately tried to mask the truth by carefully choreographing their broadcasts. During live broadcasts, critical callers are cut off and tracked down. At some point, it became illegal to carry a camera in public space. Through torture of activists, the Syrian security forces obtained the passwords of social media sites. Several television icons like Ola Abbas and Abdullah al-Omar have aligned themselves with the opposition and shed light on the façade of the official Syrian media. The regime has expelled and even killed foreign journalists on an unprecedented scale. According to the Committee to Protect Journalists and Reporters Without Borders, the arrests, disappearances, torture, and murders have cost the lives of over 200 journalists in Syria by 2013.

In order to understand manipulation of online visual material, we must realize the existing unequal power balances between the different parties involved in the Syrian conflict. The ministry, the state-owned media, the large number of hackers, and the support of Russian and Iranian cyber-warriors, allows the Assad regime vastly superior resources over the various opposition parties. The regime does its best to sow doubt and confusion, in order to ensure that international public opinion can no longer distinguish good from bad, or fiction from reality. In ways not dissimilar from Vladimir Putin’s election campaigns, the Syrian Electronic Army uses a combination of systematic manipulation, cyber attacks, blatant denial, obfuscation, and false flag operations to contaminate any and all information that is provided on Syria.

Their signature method is writing under false names, but always using Assad’s image as a profile picture. For example, they manipulate videos of Assad’s militias mistreating or executing people, by writing comments that these are actually “FSA terrorists speaking with a Saudi accent”. To the casual observer, this may seem like a revelation. But to anyone taking a closer look, it is complete and utter nonsense: the men in the video are really shouting pro-Assad slogans, and they are really speaking with an unmistakably Syrian coastal accent, which is where many of Assad’s militias hail from. The regime tries to discredit such videos through its distinctive and often entirely predictable combination of adroit lies and (half-)truths. It must be emphasized here that only states posses the capacity and resources to coordinate these kinds of large-scale manipulations.

Presenting violent videos to an interested but not necessarily specialized public often leads to skeptical responses – unmistakably a consequence of the regime’s denial campaign. “How can you even know whether this is fake or real?” is a common response. I consider these kinds of primary emotional responses to be the result of a psychological defense mechanism: the images are simply too painful to digest, and it is more comforting to believe that they are fabrications. Skepticism is not an intellectually productive attitude. It rests on the cynical and lazy assumptions that all sources of information are always based on manipulation, and that the truth is essentially unknowable. The historian or social scientist should reject this kind of obscurantism and approach these videos much like any other primary source. For example, his/her body of evidence and ultimate analysis should never be based on one source exclusively, whether video or not. The micro-situation of a particular clip should always be understood in the broader context of the events occurring at that time and place.

By remaining open-minded and asking critical questions when using video images as supplementary illustrations, the footage can be extremely useful for research and education. Accusations of spuriousness and manipulation can be handled adequately by critically and realistically maintaining vigilance, by being relentlessly aware of the primary emotional responses we feel, and to be aware of the possibility that someone may take advantage of that response. The most fruitful position is to remain critical, without allowing this to veer towards skepticism.

On 2 and 3 May 2013, Syrian security forces killed at least 459 unarmed citizens, including 106 children, in two villages in the Baniyas region. After extensive field research based on testimonies of survivors and eyewitness accounts, the Syrian Network of Human Rights and Human Rights Watch concluded that regime troops first cut off all electricity and communication, then shelled the village al-Bayda, and finally invaded the village, assisted by paramilitaries from nearby villages, systematically killing its inhabitants. The perpetrators herded defenseless citizens together on street corners and shot them point blank with semi-automatic firearms. The massacre was accompanied with large scale looting and pillaging of the personal belongings of victims. All survivor accounts confirm these findings.

The Baniyas massacre was videotaped in at least two separate recordings, both only a few minutes long, and both shot by the perpetrators themselves. The first clip shows the perpetrators, armed with Kalashnikovs, marching a group of handcuffed men to their execution. The victims obediently walk in a straight line to their execution pits. The second recording is more explicit. The perpetrators are dressed in military fatigues, but in some cases with white sneakers, and they behave triumphantly. They stroll through the village, sometimes stepping on and across the dead corpses scattered in the streets. It is unmistakably clear that the victims were not combatants, but dressed in civilian clothing: young men, elderly women and men, as well as infants. From this video we can not only discern details on the identity of the perpetrators (mostly paramilitaries), but also understand which phase of the massacre process we are confronted with, because the perpetrators are not particularly emotional and hardly speak in the videos. Moreover, each one of them seems to carry out a predetermined task: they seem to be following routine procedures such as dragging bodies out of the houses and placing them in a particular order, burning houses and reloading weaponry. Their methodic actions strongly suggest that this was not a spontaneous massacre, but a carefully and purposely planned mass murder.

It is of utmost importance to preserve and maintain all footage of the Syrian conflict – and fortunately several institutions consistently have done so since the beginning of the uprising. One of these is the ‘Syrian Archive’, a group of young Syrians and Europeans who have set themselves the daunting task of documenting the violence by safekeeping the data, identifying personal and spatial details, generating metadata, and offering an online platform to examine these videos.

The last word is to the Syrian-Dutch musician Somar Chaaban, who sings in his elegy “Haram” (2013):

What is still taboo?
You put a knife in a body, without a twitch
Hey son of the land, tell me about your hatred
And why tape it with your mobile?
I can’t take your ‘movies’ any more
Stop showing me your heinous crimes
The color of blood is blinding me.