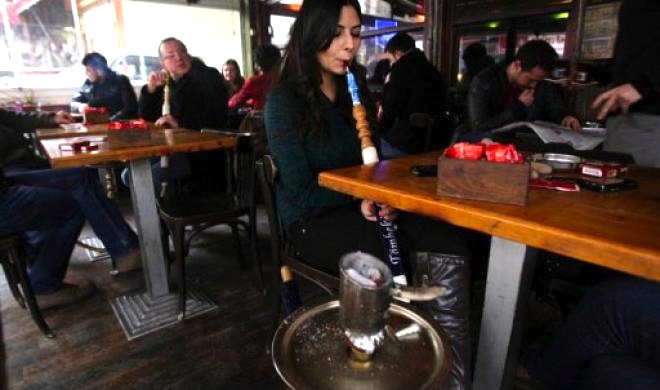 Apple, mint, watermelon or cherry. Hookah, also called narghileh or shisha– comes in different flavors. It might be tasty but it is as toxic as smoking cigarettes. Kamilia Lahrichi reports from Abu Dhabi.

Policy-makers, health experts and advocacy professionals warned of the dangers of inhaling the smoke of these water pipes at the opening of the 16th World Conference on Tobacco or Health in Abu Dhabi on March 17, 2015.

The five-day event shed light on the latest developments on tobacco use and control. It is under the patronage of Sheikh Nahayan Mabarak Al-Nahayan, Minister of Culture, Youth and Community Development of the United Arab Emirates (UAE).

Inhaling hookah smoke for one hour equals to smoking 100 cigarettes or more, according to a 2005 report by the World Health Organization (WHO). A chicha session can take between 30 minutes and two hours.

It is widely believed that hookah is less harmful than cigarettes because the smoke goes through water before being inhaled. Yet, the WTO report stresses that hookah smoke contains a high amount of cancer-causing chemicals, like benzene. It is linked with increased risk of leukemia.

“We need to de-normalize hookah use,” said Edouard Tursan d’Espaignet, Coordinator at the WHO Tobacco Free Initiative, during the opening press conference.

“Let’s remember that we are all born without cigarettes. The norm is to be tobacco free,” he explained.

In addition, “hookah could cause heart disease and cancer and there is not a safe dose,” said Scott Sherman, Associate Professor of Medicine at New York University (NYU) and Principal Investigator in the university’s Health Research Center in Abu Dhabi, during a journalism training on tobacco organized by the National Press Foundation days before the conference.

“Smoking only one or twice a week is unlikely to be good for you either,” he added.

Smoking hookah is a tradition in the Middle East and India that dates back to the 16th century. Hence, if social stigma could have triggered a decrease in tobacco use, this factor cannot play a similar role with hookah – at least in the Arab world.

Today, hookah is popular across the planet and smokers inhale different favors.

“I grew up in a generation where cigarettes were offered to guests like chocolate.

“We, children, would be running around the clouds of smoke,” said Princess Dina Mired of Jordan, Director General of the King Hussein Cancer Foundation, at the 16th World Conference on Tobacco or Health.

“Chicha is even worse than cigarettes because … it is a familial (activity) so children see their parents in a relaxing environment smoking,” said Princess Dina Mired.

Hookah is indeed a business in the Middle East and North Africa. There are 319 hookah companies registered in Jordan and 30 businesses for hookah flavoring.

Turkey paved the way for hookah control in the region. In 2013, the government prohibited smoking hookah in public places.

The UAE also implemented new rules in 2014 to prevent chicha coffees from being located less than 150 meters of schools, homes and mosques. Besides, the regulation requires non-smoking areas in hookah places.

“Turkey paved the way for hookah control in the region”

In the event of non-compliance, owners will have to close their business. They will also be fined up to Dh1 million (USD$272,000) and two years in jail. All chicha places have to apply for a license.

Yet, it does not apply to dokha (meaning “dizziness” in Arabic), the second most commonly smoked form of tobacco in the UAE. It is a mix of herbs, aromatic leaves and bark that is smoked in a pipe called “midwakh”.

“Let’s get the Turkish model out there,” said Princess Dina Mired at the 16th World Conference on Tobacco or Health.

“Arabs love conspiracy theories,” she said, so it is crucial to tell them that “tobacco companies are not going to pay their hospital bills.”