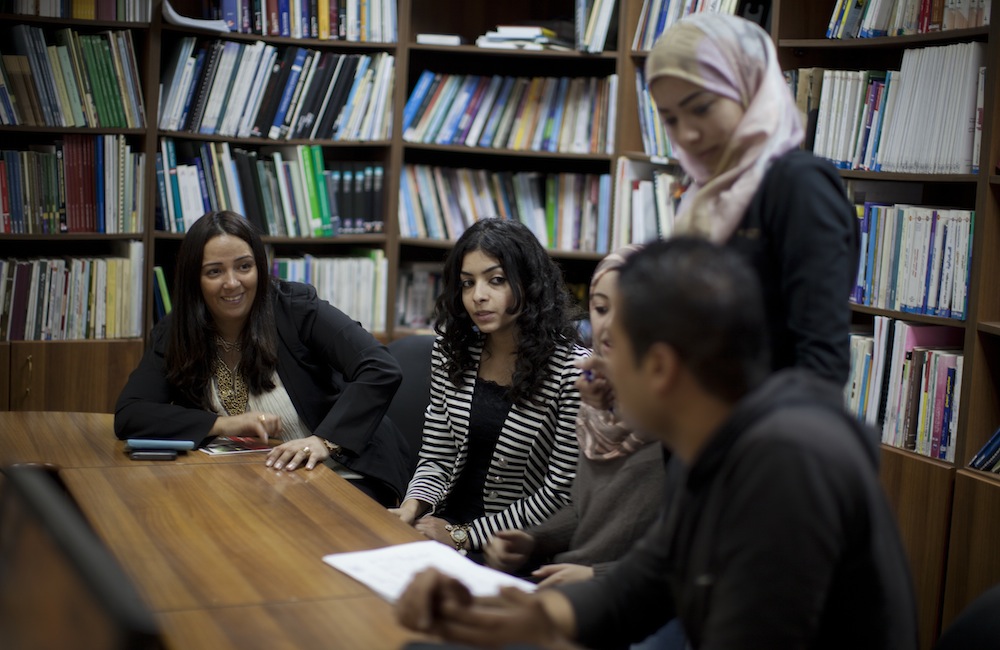 A new initiative is making it easier for Palestinians to connect with decision makers, register their complaints and get feedback. Badar Salem reports.

YouKnow, an interactive online platform aimed at bridging the gap between citizens and government officials, is making waves in the occupied Palestinian territories. The platform, which is the brainchild of Saed Karzoun, 29, a Ramallah-based journalist and social media trainer, allows the public to register their complaint in a single click on phones or computers.

“The idea behind YouKnow is to make public officials more accessible to the tech-savvy citizens, journalists and activists who use the internet and social media sites in their daily lives,” says Karzoun, hoping the new platform will encourage youngsters to be proactive about the issues that matter to them.

Karzoun, who is also the founder and CEO of “Taghyeer” (Arabic for change), a non-profit social media company, is one of a new breed of Palestinian entrepreneurs who want to promote social good and positive change. “My goal is to build bridges between decision makers, journalists and the public, and create a culture of transparency, accountability, and participation. This is what YouKnow is all about,” he notes.

“The idea behind YouKnow is to make public officials more accessible”

Karzoun had been thinking about the platform for some time. But after applying for the fifth Hult Prize, a start-up accelerator for social entrepreneurship, and being one the 40 finalists from 10,000 applications worldwide, he decided to take the project to the next step.

“Being among the 40 finalists gave me the assurance and the confidence to kick start my project,” he says. “I’ve been working on the idea of YouKnow for more than a year, and I believed in its value, but getting the necessary funds to turn the project into reality was a challenge.”

In December 2014, YouKnow initiative won the prize of Social Entrepreneurs Initiative Global by Transparency International.  Karzoun invested all the prize money (5,000 Euros) in building up the platform. But creating a functional, user-friendly site was the easy part. Karzoun had to create a database that includes all the addresses of local municipalities and ministries in the West Bank and Gaza. Furthermore, he carried out training sessions to various municipalities on how to use the platform.

“The platform is built around the idea of social accountability,” he explains. “The government, the media and the public were all supportive of the initiative. By the end of the day, YouKnow is for all of them.”

Given the fact that Palestine doesn’t have a freedom of access to public information law yet, the release of the platform comes at a particularly critical time. A new draft law, however, is awaiting approval, and Karzoun hopes his initiative will help speed things up.

“At this stage, and because a new draft isn’t approved yet, we’ll be focusing on municipalities and local government services in addition to health and education, in order to create the trust between us, the government and the public. Later on, we’re hoping to raise issues related to the corruption, misuse of public funds, nepotism and other problems.”

Filing a complaint via the YouKnow application, available on web browsers, is pretty straightforward. Once you log into the site, you can choose the location of your complaint and the department you want to address it to. The site will give you the option to attach a picture, a video or an audio to the complaint before submitting it.  After the complaint is posted, a ‘change’ button allows for the official to respond.

The person who submitted the request or the complaint can see how many other people complained about the same issue and check if the issue has been addressed or not. Karzoun notes that he limited the length of the post to 300 letters only, so to enable officials to focus on the problem itself.

While Karzoun is not worried about getting more people to file their complaints online (Palestine is ranked among the highest in the region in internet penetration), evaluating the actual results the platform is able to deliver and getting the government officials to use the technology is one big task for Karzoun.

“Later on, we’re hoping to raise issues related to the corruption”

“Many Palestinian ministries and municipalities are already familiar with the concept of YouKnow and they’re willing to use such platform instead of responding to citizens’ requests on Facebook or Twitter, which could be overwhelming,” he says.

So, what if the concerned official didn’t respond to a specific complaint? “Soon, we’ll have YouKnow specialists who will be responsible for contacting the concerned official in such cases and getting him/her to respond to the issue,” Karzoun explains. “If we still got no response, we take the matter to national radios, who we’re partnering with, and we create a public discussion around the issue.”

Asked if he is worried about not being able to control the flow and the quality of the complaints, Karzoun says, “We have in place a clear policy in dealing with defamation, insults and other improper language. We’re also partnering with well-known accountability organizations such as the Affiliated Networks for Social Accountability in the Arab World and the Coalition for Accountability and Integrity in Palestine AMAN. These policies and partnerships will allow us to deal with these issues whenever they arise.”

As for the future, Karzoun hopes his platform could spark interest from other Arab cities like Amman, Cairo and Tunis. But for the time being, his main focus is to get the needed funds to build up the YouKnow app and get more people to use the platform.