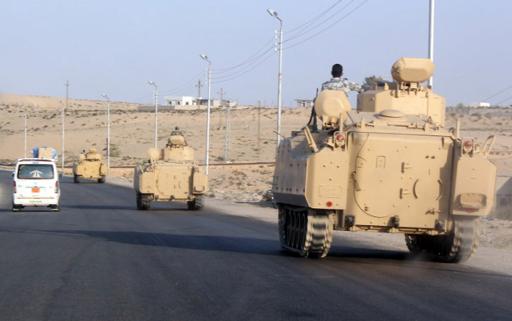 Jihadists in Egypt’s Sinai killed 15 soldiers and two civilians in attacks on checkpoints on Thursday, security officials said, the deadliest in months despite a massive army campaign against the insurgents.

The gunmen, believed to be members of the Islamic State group’s Egypt branch, simultaneously opened fire with assault rifles and grenade launchers at five checkpoints in the restive north of the peninsula, the security officials said.

Medics confirmed 15 soldiers and two civilians were killed in the attacks.

Military sources said 15 militants also died in an exchange of fire but the toll could not be verified by medics.

It was the deadliest attack in Sinai since suicide car bombers and gunmen killed more than 30 soldiers at a military base in North Sinai’s capital El-Arish in January, prompting Egypt’s president to shakeup the military command.

The army has since claimed it killed more than 170 militants in air strikes and ambushes.

In a separate incident, a mortar shell fell on a house east of El-Arish, wounding three civilians, police and health officials said.

Ansar Beit al-Maqdis — Partisans of Jerusalem in English — changed its name last year to the Sinai Province after pledging allegiance to IS, which controls territory in Iraq and Syria.

The group, which has claimed several sophisticated attacks in Sinai and the Nile valley, now wants to establish a province of the self-declared IS “caliphate”.

After the army ousted Islamist president Mohamed Morsi in July 2013, militants claimed a string of deadly attacks against security forces which they claimed were in retaliation for a deadly government crackdown against Islamists.

Most of their attacks have targeted police and soldiers, but the group also took responsibility for a 2014 suicide bombing aboard a tourist coach that killed three South Koreans and their Egyptian driver.

President Abdel Fattah al-Sisi, the former army chief who ousted Morsi, has pledged to eradicate the militants believed to be led by a mysterious Egyptian cleric known as Abu Osama al-Masri.

The militants, who have drawn recruits from Sinai’s long-marginalised Bedouin, have taken advantage of the peninsula’s desert and mountain terrain to survive.

Thursday’s attack came as the United States pledged to free up a delivery of F-16 fighter jets to Egypt and channel military aid into securing the strategic peninsula Egypt regained from Israel in 1981 following a peace treaty.

Washington had suspended part of its annual $1.3 billion (1.2 billion euros) in military aid to Egypt in response to the crackdown on Morsi’s followers, which left hundreds of protesters dead.