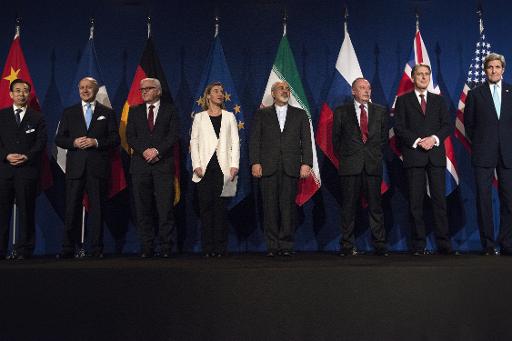 Global powers and Iran agreed to the outlines Thursday of a potentially historic deal to stop any Iranian bid to develop nuclear weapons.

Global powers and Iran agreed to the outlines Thursday of a potentially historic deal to stop any Iranian bid to develop nuclear weapons.

The “parameters” for the accord will be fleshed out into a comprehensive agreement by June 30 in an attempt to end more than a decade of tensions with the Islamic Republic.

Here are the main outlines of the agreement, agreed after marathon talks between Iran and the so-called P5+1 — Britain, China, France, Germany, Russia and the United States — as released by the US State Department.

Iran will slash by more than two-thirds the number of uranium centrifuges, which can make fuel for nuclear power but also the core of a nuclear bomb, to 6,104 from around 19,000 for 10 years.

Iran’s stockpile of low-enriched uranium, currently enough for several nuclear bombs if enriched to weapons-grade, will be reduced from 10,000 kilogrammes to 300 kg for 15 years.

Iran will not build any new enrichment facilities for 15 years. It will only enrich to low fissile purities for at least 15 years.

Iran’s Fordo facility, built into a mountain near the holy city of Qom, will not be used for uranium enrichment for at least 15 years, meaning Natanz will be the only enrichment facility.

Fordo will be converted into a nuclear, physics, technology and research centre.

At Natanz, Iran’s 1,000 more advanced IR-2M centrifuges will be removed. The small numbers of other more advanced ones will not be used to produce enriched uranium for at least 10 years.

Research and development into advanced centrifuges will be limited to ensure that the “breakout” time — the time needed to produce a bomb’s worth of material — will be at least one year.

Iran will redesign and rebuild a heavy water research reactor in Arak, so it does not provide Iran with plutonium, the alternative to uranium for a nuclear weapon.

The original core of this reactor will be destroyed or removed from the country. All the spent fuel, from which plutonium could be extracted, will be shipped out of the country.

Iran will not build any additional heavy water reactors for 15 years.

New transparency and inspections mechanisms will closely monitor materials and/or components to prevent diversion to a secret programme.

The UN atomic agency, the International Atomic Energy Agency, will have access to uranium mines and continuous surveillance at uranium mills that process uranium ore for 25 years.

Iran will implement the Additional Protocol of the IAEA, providing the IAEA greater oversight, and Code 3.1 requiring early notification of new facilities.

Iran will be required to grant access to the IAEA to investigate suspicious sites or allegations of covert facilities.

An “agreed set of measures” will address the IAEA’s stalled probe into allegations of possible military dimensions (PMD) of Iran’s nuclear programme.

If at any time Iran fails to fulfil its commitments, these sanctions will “snap back” into place.

The architecture of US nuclear-related sanctions will be retained for much of the duration of the deal.

All past UN Security Council resolutions on the Iran nuclear issue will be lifted simultaneous with the completion, by Iran, of nuclear-related actions addressing all key concerns.