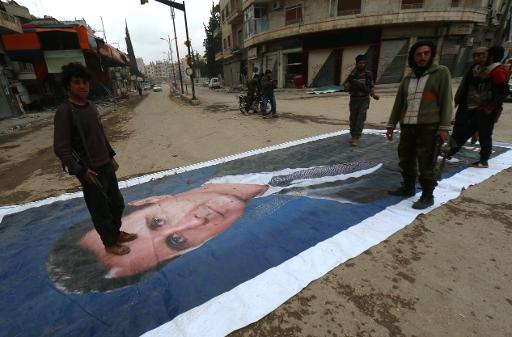 Syrian President Bashar al-Assad’s regime was reeling Thursday from a series of setbacks after rebels seized a major provincial capital and a key border post in less than a week.

Experts said the losses were a reflection of the regime’s weariness after more than four years of civil war and increasing regional efforts to counter Iran’s backing for Assad.

Also on Wednesday the Islamic State group took parts of Yarmuk Palestinian refugee camp in Damascus, triggering alarm bells for the Syrian government which appealed for UN intervention and ramped up security.

“It’s indicative of a problem the regime has that has been increasingly obvious — it has a manpower shortage,” said Noah Bonsey of International Crisis Group.

“It has constraints on how much ground it can gain and how much it can hold outside of its core areas.”

The border crossing with Jordan was the government’s latest loss in Daraa province after rebels captured last week the ancient town of Bosra al-Sham and seized an army base in January.

Idlib, in northwestern Syria, is the second provincial capital to fall into rebel hands after IS overran Raqa, the jihadists’ self-proclaimed capital.

Yezid Sayigh of the Carnegie Middle East Centre said the setbacks were “significant” for the regime even if “they don’t change the overall strategic picture”.

“The regime still retains important assets, while the rebels are still limited by organisational and manpower problems. But the real implication is that both are badly weakened and unable to achieve a decisive breakthrough anywhere,” he said.

Bonsey said the losses in Daraa and Idlib were part of “a larger pattern” of the regime being pushed out of areas where it cannot commit significant forces or count on backing from regional allies, Iran and Lebanon’s Shiite Hezbollah movement.

“The regime is increasingly dependent on Hezbollah, foreign fighters and non-Syrian militias facilitated by Iran to accomplish military objectives,” he said.

“But in places like Idlib, Hezbollah and Iran are not willing to invest with boots on the ground.”

Sayigh said Al-Nusra “has emerged as a backbone of the armed rebellion, especially in Idlib province” and noted that group had a “superior organisation and battle command”.

“In Syria we see a trend towards three main armed camps: the regime, ISIS (IS), and other groups that are gradually drawing under an umbrella in which Nusra is the leading group.”

Rami Abdel Rahman of the Syrian Observatory for Human Rights said increasing Arab and Turkish support for the rebels was also a key factor.

“There has been a regional decision between Saudi Arabia, Qatar, Jordan and Turkey to stop the Syrian regime from advancing,” he said.

The rebels had recently received new weapons from Jordan and Turkey.

“Regional powers want to retake the initiative. It’s a message that they want to stop advances by Iran, the regime’s ally, in Syria but also elsewhere like Yemen” where a Saudi-led coalition is bombing Tehran-backed rebels, said Abdel Rahman.

Assad’s regime has been battling a wide-ranging insurgency since an Arab Spring-inspired uprising in March 2011 evolved into a full-scale civil war that has now left more than 215,000 dead.

Secular rebels have been increasingly pushed aside by jihadists, in particular IS, which declared an Islamic “caliphate” straddling chunks of territory it controls in Syria and Iraq.

The IS threat to the regime was highlighted Wednesday when the group’s fighters for the first time seized territory inside Damascus itself at the Yarmuk Palestinian refugee camp.

The jihadists captured most of the camp before being pushed to its edges Thursday in a fightback by Palestinian militants loyal to Islamist group Hamas and other rebel factions.

But IS launched a counter-assault, retaking the territory it lost in fierce fighting, as government forces shelled the camp.

A regime source on the ground told AFP that the army imposed stringent security measures to stop IS expanding outside the camp.

“The main entrance that connects the camp with Damascus is secured and well-controlled,” the source said.

The government, meanwhile, sent a letter to the UN Security Council seeking “urgent intervention” to drive IS out of Yarmuk, and charging they are backed by Saudi Arabia, Qatar, Israel and Jordan.