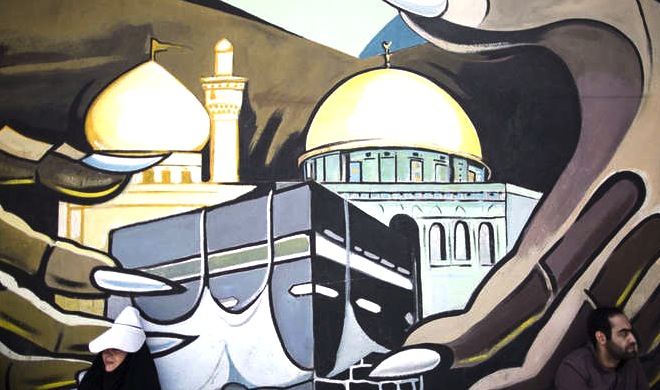 My intention in writing this piece is twofold: first, to introduce Doozakhrafat as a satirical book that displays a deep vision and strong writing skills, and second, to open a dialogue on issues of satire and sacredness.

Not much study has been conducted on the relationship between the realm of the “sacred” and its satirical critique, as the topic is often deemed sensitive and controversial. Are jokes that target religious beliefs necessarily offensive? Where should one draw the line between insulting ridicule and critical satire? Is it possible to apply humor in the critique of people’s deepest and dearest beliefs without disturbing their feelings? Such questions have often been neglected in Iran, due in part to the increasing social and political sensitivity.

One should be reminded that metaphysical jokes are neither a modern construction, nor a necessarily secular project. Such jokes are in fact quite frequent in classical Persian literature, for example in Ragheb Esfahani’s “Navader” written in the 4th century and in Obayd Zakani’s “Resaleh-ye Delgosha” written in the 8th century. Instances of such satire in Persian Sufi poetry would be labeled as apostasy today. This satirical twist of theological concepts is even evident in the canonical poetry of Hafez and Rumi, while the former sought to raise awareness the later had a more sarcastic approach (see for example Rumi’s “Moses and the Shepard,” where he even shepardizes God himself). Many Islamic texts and sermons, as Jalal Rafi has shown in his 1993 paper, “Is joking with Quranic verses and the Hadith permissible?”, apply satire in their religious content. According to Rafi, these jokes were intended to bring the theological teachings of the Quran and the Hadith into people’s daily lives.

RECENTLY, I received a book entitled “Doozakhrafat,” which contains theologically-oriented jokes by Sorush Pakzad, parts of which are available in his blog. The book was published in 2012 by H&S Media, in 268 pages. The author aims to criticize anthropomorphic perceptions of the divine by revealing how the limited human fantasies and imagery mediate and construct our understanding of god and religion. To me, the spirit and essence of Doozakhrafat can be somewhat detected in the Persian oral culture of satire, rather than in written precedents. The taboo nature of such subjects would lead many to articulate the irrationalities of their faith in a satirical form and joke about it in their private circles.

Doozakhrafat retells religious stories and anecdotes (this time in a modern contemporary setting), relocates heavenly beings to earth, and reevaluates the spiritual through rational measurements. The author takes its audience on a journey through time and space, as if the genesis creation days happened today, and as if today is the judgment day. The residents of the heavens are accommodated in 21st century Iran and under the rule of its supreme leader. This combination of the metaphysical with the materialistic generates alienation, surprise, and laughter. The reader gets the change to identify with beings that had remained inaccessible and witness their stories in familiar circumstances.

Doozakhrafat enjoys a diverse range of contents: often, they have a critical tone, either through moments of humor or through expressions of metaphysical insights. Sometimes the author brings the heavenly creatures on earth and exposes god’s inefficient and corrupt bureaucracy. Therefore, most of its anecdotes have a playful attitude towards divinity. What distinguishes Doozakhrafat’s humor from similar satirical literature is its equanimity. Prior to Doozakhrafat, Persian satirical works that target sacred themes were charged with hostility and hatred (see for example Zabih Mansur’s “Me’raj-Nameh” and “Gand-e Badavard” and Sadeq Hedayat’s “Tup-e Morvari”); and therefore, Doozakhrat is unique in this regard and unparalleled in Persian literature.

The French philosopher, Henry Bergson (1859-1941), considered comedy “a game that imitates life.” Doozakhrafat’s comedy is also an imitation game, yet of a different kind. It demystifies the beliefs and dogmas that people have held dearly for centuries and relocates them within our contemporary daily lives and invites its readers to observe the author’s realistic depiction of otherwise surreal events.

YASER MIRDAMADI, an Iranian scholar of analytic philosophy of religion and epistemology of Islam, believes that Sorush Pakzad’s satirical critique of religion is not only morally justified but also of great value within apophatic theology. Apophatic theology, also known as negative theology, is a theology that suggests experiences of the Divine are ineffable, and therefore, any “positive” terminology to describe or refer to the Divine, specifically God, fails to capture its ultimate perfection. In other words, any imagery that tries to depict the Divine, in its immense complexity, is false and thus satirical criticism of such attempts is embraced by apophatic theology and considered iconoclastic.

Such arguments, nevertheless, do not prevent many readers from feeling annoyed when confronted with passages from the book that radically question their long-held beliefs. Criticism of ideas that many deem sacred, especially once communicated through humor, can easily irritate the target audience, partially because satirists situate themselves above and beyond their subject. Satire’s top-down approach in dealing with its subjects makes the genre more effective compared to other critical media, especially in the case of Doozakhrafat, whose author holds a penetrating pen and a strong and deep perspective.  I do not know Sorush Pakzad personally, but his book testifies that he is a unique and unmatched satirist.

“…most of its anecdotes have a playful attitude towards divinity”

In this section, I shall briefly review the book’s main qualities. The adopted forms are diverse, astonishingly diverse. The parodies are masterful; moreover, their innovative approach makes them more enjoyable. Even the ones that may not be completely original are so polished and well crafted that they can be read over and over again. The writing is minimalistic and does not bore the reader with unnecessary information. Not a single word is out of place; the details are clean and precise. In some of the stories, which have a dialogical format, the responses are eliminated, to allow for a faster rhythm. Application of words and phrases is professional and artistic. Different dialects are adopted skillfully in the informal heavenly conversations, and often the humor is a result of this defamiliarization technique. Most of the stories enjoy a precise tone, a theatrical setting, believable dialogues, and often a good finalizing surprise element.

THE DIALOGUE-BASED stories are astonishing; the word choices and flow are realistic and successfully communicate the message. All in all, the form and language of the book, confirms the author’s authority over his work; he knows what he is doing and approaches the topic with a thoroughly-thought design. Being on top of his subjects, Sorush Pakzad artistically applies the professional language in each of his parodies. Even the titles for each story are obsessively and thoughtfully picked, some of which are very innovative. Occasionally, the titles become a complementary piece that helps the reader make sense of the otherwise incomplete story.

The book respects the reader’s intelligence. In many occasions, it avoids a straightforward development of the subject and rather allows the reader to read between the lines and figure out the missing pieces. Most of the stories enjoy a surprising concluding scene, where the humor reaches its climax. In such cases a sudden shift of situation or narrative shocks the reader and creates the comedy. Overall, the introductory, the punchline, and the concluding sections of most stories are amazing. The great technical details of the writing combined with the author’s thorough knowledge of the wide range of subjects touched in the book make Doozakhrafat a rich and insightful piece.