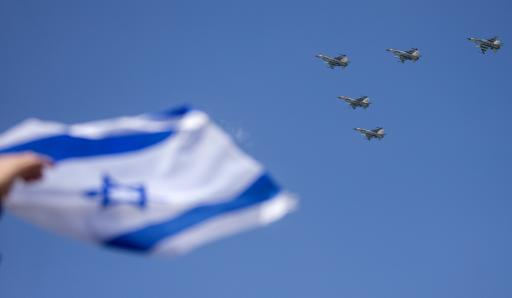 Thousands of Arab Israelis marched in protest Thursday as their Jewish compatriots partied, each group in its own way marking the 67th anniversary of the Jewish state's founding.

The anniversary of Israel’s declaration of independence on May 14, 1948 is celebrated according to the Jewish calendar, this year falling on April 23.

Palestinians and many Arab Israelis usually mark the day on May 15 by commemorating what they call the Nakba — or “catastrophe” — of Israel’s creation.

But thousands of Arab Israelis, many waving Palestinian flags, gathered Thursday in the Galilee for a protest march timed to coincide with the Israeli celebrations.

It centred on the ruins of Al-Haditha, near Tiberias, one of nearly 400 Palestinian villages destroyed in the war that erupted after Israel’s founding.

“Our grandfathers who suffered displacement asked us not to sell our land and to return to it and not give up,” activist Hammad Abu al-Haija told the crowd.

More than 760,000 Palestinians — estimated today to number 4.7 million with their descendants — fled into exile or were driven out of their homes in the conflict that followed the creation of the Jewish state.

Prime Minister Benjamin Netanyahu used the occasion to call on Jews from around the world to move to Israel.

“It is completely clear that this is home,” the Israeli leader said during an annual international bible quiz.

“We don’t dismiss the obligation of various governments around the world to take care of the security of their Jewish citizens, but we say to the Jews of the world: ‘This is home… We are awaiting you with open arms’.”

Many Israelis flocked to barbecues and visited national parks and nature reserves in what has become a tradition on the public holiday, despite strong winds and showers in much of the country.

President Reuven Rivlin hosted celebrations for his first time in office at his official residence in Jerusalem, serving a vegetarian-only buffet, his office said.

He reportedly stopped eating meat in the 1960s as a matter of conscience.

Guests watched a flypast of military helicopters and Rivlin, elected in June to a seven-year term, awarded medals of excellence to 120 selected soldiers.

Celebrations began at nightfall on Wednesday with a torchlit official ceremony at Mount Herzl in Jerusalem and public festivities and firework displays around the country.