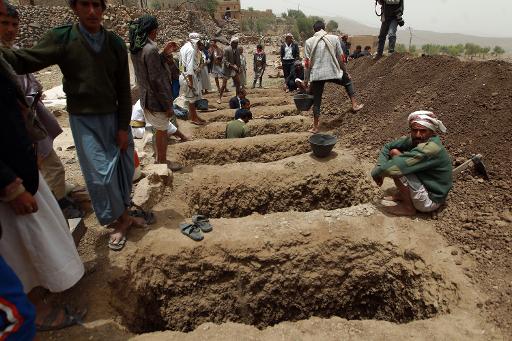 Saudi-led warplanes launched more deadly strikes in Yemen Thursday despite a demand by Iran-backed rebels for a complete halt to the raids as a condition for UN-sponsored peace talks.

The Saudi-led coalition has declared an end to the first phase of its operations against the Huthi Shiite rebels and their allies, but vowed to keep hitting them with targeted bombing when necessary.

Two days on, a new wave of strikes killed at least 23 rebels as the World Health Organization said the overall death toll from fighting in Yemen since late March topped 1,000.

He replaces Morocco’s Jamal Benomar, who resigned last week after losing support for his mediation efforts from oil-rich Gulf countries.

Saudi Arabia and its Arab allies launched the air war on March 26 in an attempt to restore the authority of President Abedrabbo Mansour Hadi, who was forced to flee abroad last month as the rebels swept across the country.

After the end of Operation Decisive Storm, the coalition said the campaign would enter a phase dubbed Renewal of Hope focusing on political efforts, aid deliveries and “fighting terrorism”.

But the Saudi ambassador to the US, Adel al-Jubeir, has since warned that “the Huthis should be under no illusion that we will use force in order to stop them taking over Yemen by aggressive actions”.

His remarks came as US President Barack Obama called on Iran to help find a political solution in Yemen, accusing the Islamic republic of contributing to the conflict.

And in Bahrain, Yemeni Foreign Minister Riyadh Yassin accused Iran trying to run the coalition naval blockade on his country.

He described the war as an “attack on all Yemenis based on an Iranian plot implemented by the Huthi militia.”

The conflict topped the agenda as Pakistani Prime Minister Nawaz Sharif visited Riyadh, expressing “solidarity” with the kingdom after his parliament refused to send forces to help the coalition.

The Saudi-led alliance says it has destroyed the Huthis’ missile and air capabilities, but the rebels still control Sanaa and swathes of the country while Hadi remains in self-exile in Riyadh.

The rebels have called for a complete halt to the raids so warring parties can return to the negotiating table.

“We demand, after a complete end to the aggression against Yemen and the lifting of the blockade, to resume political dialogue… under the sponsorship of the United Nations,” said spokesman Mohammed Abdulsalam.

Since his remarks, however, a new wave of strikes Thursday killed at least 23 rebels in the southern town of Daleh, a government official said. Other raids targeted them in nearby Lahj.

In Yemen’s third city of Taez, a Red Cross official said his team had retrieved the bodies of 10 loyalist troops thought to have been killed two days ago when rebels overran their base.

There were more bodies, he said, but the Huthis had denied rescuers access to the area.

The discovery came after a night of air raids in Taez that caused an unknown number of casualties, according to a medic.

Three raids also hit rebels in the eastern province of Marib, and others targeted a rebel-held air base in the western city of Hodeida.

“The war is not over” but “there are several attempts to find a political solution,” said Abdulkhaleq Abdulla, political science professor at the University of the Emirates.

A newly announced division of the Islamic State jihadist group — the “Green Brigade” — also claimed a bombing in Yarim the day before that it said had killed five rebels.

The WHO now says at least 1,000 people have been killed in Yemen between March 19 and April 20.

The Bill & Melinda Gates Foundation said it was providing the International Medical Corps with $800,000 (747,000 euros) to deliver emergency relief to Yemen, after the Red Cross warned of a catastrophic humanitarian situation.

In Nairobi, Somali Prime Minister Omar Abdirashid Ali Sharmarke warned that the conflict posed dangers across the Gulf of Aden, where an influx of refugees is stretching scarce resources and Al-Qaeda is eager for support.