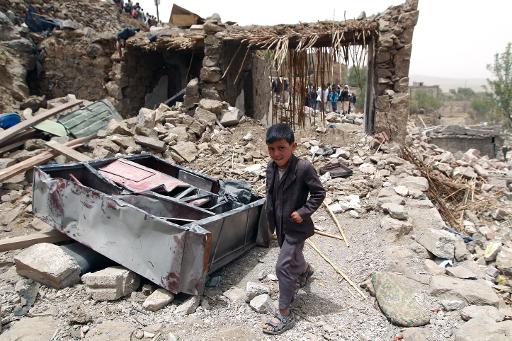 At least 115 children have been killed and 172 maimed in the violence raging in Yemen since Saudi-led air strikes began on March 26, the UN children's agency said Friday.

At least 115 children have been killed and 172 maimed in the violence raging in Yemen since Saudi-led air raids began on March 26, the UN children’s agency said Friday.

“We believe that these are conservative figures,” UNICEF spokesman Christophe Boulierac told reporters in Geneva, saying at least 64 of the children killed between March 26 and April 20 were victims of air strikes.

The UN agency said another 26 children had been killed by unexploded ordnance and mines, 19 by gunshots, three by shelling and three by “unverified causes related to the conflict”.

Seventy-one of the children died in the north of the country, UNICEF said.

Saudi Arabia and its Arab allies launched the air war at the end of March in an attempt to restore the authority of President Abedrabbo Mansour Hadi, who was forced to flee abroad last month as Iranian-backed Huthi fighters swept across the country.

The World Health Organization said Thursday the overall death toll in Yemen had topped 1,000, and the UN’s human rights agency said Friday at least 551 of the people who died were civilians.

UNICEF meanwhile said that since March 26, at least 140 children had been recruited by armed groups.

The agency’s representative in Yemen Julien Harneis said earlier this month that up to a third of fighters in the country were children.

In Yemen’s tribal culture, it is common for boys to take up arms at a young age — something that is having dire consequences amid the spiralling conflict.

On Friday, Harneis pointed out in a statement that “hundreds of thousands of children in Yemen… continue to live in the most dangerous circumstances, many waking up scared in the middle of the night to the sounds of bombing and gunfire.”

“The number of child casualties shows clearly how devastating this conflict continues to be for the country’s children,” he said.

The spiralling conflict has fuelled a humanitarian disaster in a country that was already suffering from shortages before the latest fighting erupted.

The UN’s World Food Programme warned Friday that a full 12 million people in the country did not know where their next meal was coming from — a 13-percent increase since the conflict escalated in late March.

The agency said it was delivering food to more than 100,000 people sheltered around the southern port city of Aden.

“But we are struggling to reach people because of deteriorating security,” a WFP statement said, adding that dire fuel shortages were also hampering the response.

The food agency said it hoped to provide emergency food aid to 2.5 million people from May to July.