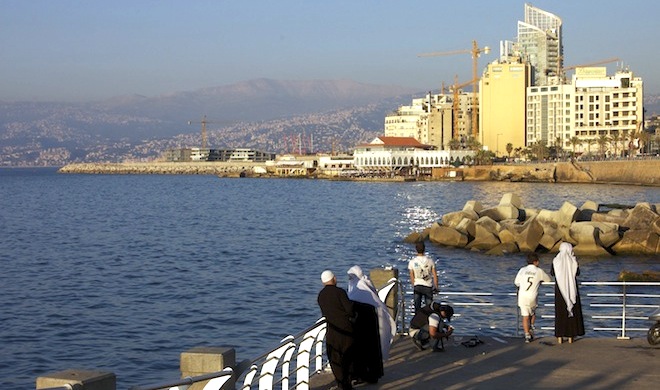 Lebanon's land exports to Gulf markets have been choked off, leaving millions of dollars in goods stranded after the closure of a vital crossing on the Syrian-Jordanian border last month.

The Nasib border point was the last remaining gateway for Lebanese truck drivers transporting agricultural and industrial products to Iraq and Gulf countries.

After Syrian rebels seized Nasib on April 1, these exports came to an abrupt halt.

Goods transported overland made up 35 per cent of all of Lebanon’s exports, economic analyst Nassib Ghobril told AFP.

But all those potential exports are now effectively stuck in Lebanon, he said.

“The Nasib crossing was the only way for Lebanese products to be exported by land. Since it closed, there are no more land crossings now,” Ghobril said.

Before the Syrian crisis erupted in 2011, Lebanese products travelled frequently through Lebanon’s neighbour, then on to Iraq to the east or to Jordan and Saudi Arabia in the Gulf to the south.

As Syria’s war worsened, its border crossings with Iraq closed, leaving Lebanese truckers with only one option: Nasib.

Omar al-Ali, head of Lebanon’s Refrigerated Truckers Syndicate, told AFP that about 250 trucks would cross from Lebanon into Syria every day before the conflict.

That number dropped to 120 daily because of growing instability along Syria’s major highways, and with Nasib closed, just a few trucks destined for the shrinking Syrian market only leave Lebanon every day.

Although one crossing along the Syria-Iraq border remains open, Ali said it is too dangerous to use.

According to Ghobril, Lebanon’s land exports have been affected the most by the Syrian crisis, apart from tourism.

Road closures have hit agricultural exports the hardest, since they rely predominantly on land routes and cannot be easily transported by air or sea.

“Our trucks transported our agricultural and industrial products. This is what carried Lebanon’s economy,” Ali said, adding that the losses could be in the millions of dollars.

“Now we have 900 refrigerated trucks that are just sitting inside Lebanon,” with others stuck in the Gulf, he told AFP.

Alam said he lost at least one million dollars in the three weeks after Nasib’s closure.

According to the agriculture ministry, the sector employs 20 to 30 per cent of the Lebanese workforce.

Many truckers can now be found discussing their plight at their syndicate’s offices in Bar Elias in east Lebanon.

Khaled Araji, 55, is just one of hundreds of Lebanese who used to drive goods through Syria to the Gulf, and whose livelihood has now on hold indefinitely.

“I just spend my time in the house. I’ve worked in this business for more than 30 years, and if I don’t see the (truck’s) refrigerator every day, I can’t relax. This job is in my blood,” Araji told AFP.

Ali said truck drivers made $1,500 a month “to provide for their families by generating activity in other sectors. All of this has stopped now.”

To make up for routes through Syria being closed, the Beirut government is looking at exporting these goods by sea.

According to Ghobril, this alternative “requires more time than by land, and it’s definitely more expensive, but it’s still better than nothing”.

But Alam downplayed the effectiveness of maritime transport, saying some green produce would not stay fresh long enough for the journey.

In his warehouse in Bar Elias, young men and girls pack oranges, apples and fresh lettuce — whose prices have dramatically dropped — into crates and boxes for export by air.

As the peak harvest seasons in August and September draw closer, exporters and truckers are hoping for a speedy solution to the problem.

But Agriculture Minister Akram Chehayeb, speaking after a cabinet meeting on the crisis last week, was not hopeful.

“Unfortunately, we have become an island,” he said.