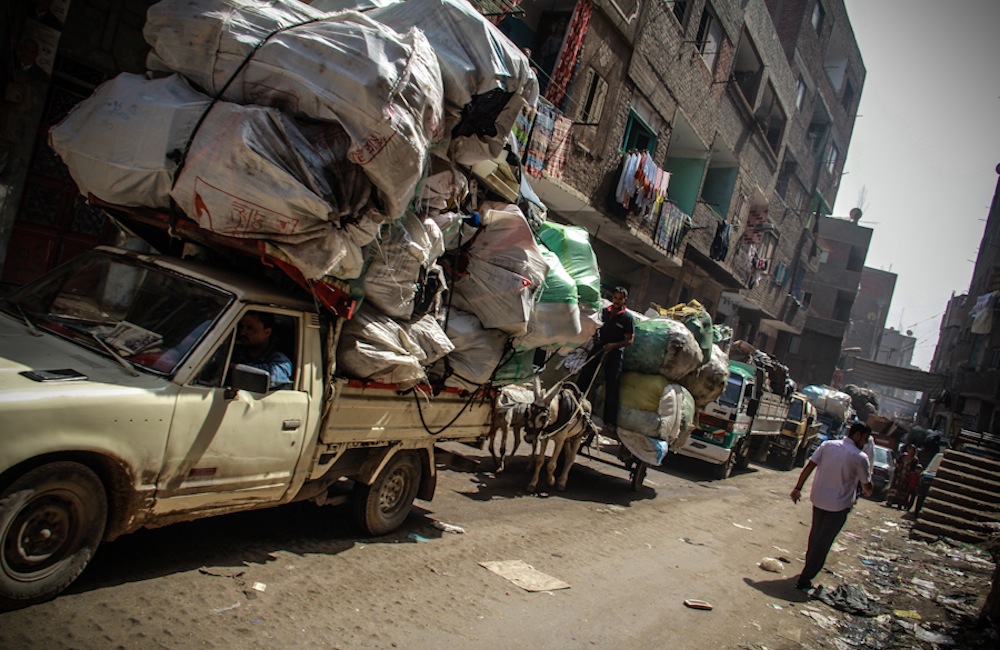 One community in the Egyptian capital has created an entire existence around other peoples' trash. And they've done it very well – question is, will politics and foreign investment ultimately get in the way?

Egypt is home of the great pyramids, ancient temples and popular uprisings. It is also a place of extreme wealth and poverty with the streets of Cairo, its main city and capital, being the greatest showpiece of the immense contrast. While studying, I spent a year living in this metropolis and got the chance to volunteer and learn more about the mechanisms that drive Africa’s most populated city.

Here, in the myriad of urban slums and the modern and endlessly expanding suburbia, approximately 18 million people generate more than 15,000 tones of waste every day, making Cairo one of the most polluted and dirtiest cities in the world. The government has so far been very inefficient in tackling this environmental situation, which also has negative spillover effects on public health and the local economy. The city is constantly growing, and so is its garbage problem.

Living in the mess, a certain community decided to tackle the situation and make a living out of others’ trash. This community lives and works in the Muqattam area of greater Cairo and is known as the Zabaleen (Arabic for garbage collectors). Using donkey carts and pickups, the men collect garbage from all over Cairo. Once returned to the Muqattam area, female and younger members of the community hand-sort 9,000 tones of garbage every day into 16 different types of waste. The output is eventually turned into quilts, rugs, pots, paper, livestock food, compost, recycled plastic products such as clothes hangers, and much more. Reusing and recycling about 85% of all waste that they collect, the Zabaleen have far surpassed the efficiencies of the best Western recycling schemes, which have so far only been able to reuse 70% of all material.

The community sells their collects to local manufacturers who either reuse the materials or export them as recycled raw material. This model does not only prevent Cairo from getting buried in its own waste, but also provides a regular income for more than 50,000 people living in the area5. The whole scheme is based on informal arrangement and community driven collaboration, and today, the city considers the Zabaleen as Cairo´s main trash collectors.

In Egyptian Arabic, Zabaleen is a word which literally means “Garbage people”. The Muqattam community descends from Coptic farmers that migrated to Cairo in the 1940s from El Badary district in Assiut, Upper Egypt. Living in informal settlements, the community used to move around the city in order to avoid authorities. In the late 1980s they settled in six informal settlements, with Manshiet Nasser being the largest. Here, at the foot of the Muqattam Mountain, the community built what eventually became Cairo’s Garbage City (officially Manshiet Nasser). Today, the area houses 50,000 to 70,000 people living in self-made multi-storey homes.

The community maintained ties with their rural origins, preserving community organization by intermarrying and sharing households with extended family. Often, each home provides housing for three generations and walking in the area one can easily feel the tight family relations that exist in the community.

The Zabaleen survive as a community because of their strong relationship between identity and place of residence. By living with extended family and never leaving the place of birth, the Zabaleen have cultivated civic and mutual responsibility, hard to encounter in other mega cities. Garbage City is also home to the only all-boys Recycling School in Egypt, run and established by the Spirit of Youth Association (NGO). The curriculum is designed around waste management and recycling, thus classes such as math are taught with examples from waste collection. Through this teaching style, the youth is taught skills useful not only in the world outside of Garbage City, but also as tools to develop their family and community practices.

Zabaleen city is a great example of what happens when architects and planners leave, and space is taken over by people. Although still very informal and messy for an outsider, the neighborhood has developed its own way of coping with waste, electricity, sanitation and education where especially the church is playing a significant role for the youth. Today the government is completely absent in the area. From financing to maintenance, the community takes care of its own infrastructure and services. A great example of this effort is the seven churches carved and hidden in the caves of Muqattam Mountain. The Monastery of St. Simon the Tanner is the largest with an amphitheater big enough to seat 20,000 worshippers. Its size makes the church the largest in the Middle East.

The city is a patchwork of micro economies and small businesses, all existing because of the waste management industry. Whether building a new home, floor or room, recycling is considered as the focal point of any design decision. While typical housing is traditionally designed to dispose and reject its garbage, homes in Garbage City are kept open to manage a constant flow of waste.

Whether public or private, space is intuitively designed around the livelihood activity. All structures are designed to enhance the recycling operations and working with no planning and grid makes every home unique, built according to the particular resources and skills of the dwellers. In the mace of different styles and technics, one simple rule of thumb is recognizable on all structures. Ground floors are reserved for recycling while upper floors are kept for living space. Churches, schools, clinics and other public facilities are designed in the same way. In some cases, small animal farms are placed on the upper floors, and the rooftops are used as urban gardens or spaces for biogas generators.

The informal yet very efficient ecosystem of the Zabaleen has been attacked by formal powers on several occasions. One example of this is the Egyptian government and its take on the global swine flue epidemic of 2009. In order to get rid of any organic waste leftovers, the community kept a living recycling machine of several thousand pigs. The Zabaleen are predominantly Christian Cops, and were allowed to keep pigs in a Muslim city. The pigs did not only dispose any organic waste, but were also sold as meat to big tourist facilities for up to $1,400 per animal.

This changed in 2009, when the Egyptian government slaughtered 300,000 pigs across Egypt. The pretext was to take proactive measures against the swine flu, but according to WHO, the pigs had nothing to do with the epidemic. The Zabaleen did not only suffer financially and lost half of their income, but their overall waste management process suddenly missed a vital component. Organic waste started rotting in the streets and it took several years to reorganize and return to the same level of efficiency as in 2009. However, the community showed great resilience, adapted and managed to overcome the intervention. Today, the pigs are back in Garbage City but others have also threatened their existence.

The Egyptian authorities have tried to formalize Cairo’s trash collection by inviting foreign companies. According to the official statement, the scheme was activated in order to formally tackle Cairo’s trash problem and optimize the operations. However, many believe that the privatization plans of Municipal Solid Waste (MSW) services through contracting technology-intensive multinational corporations were part of the IMF plan set in the 1990s. Regardless of the motive, the plan was pushed through and foreign waste-collecting companies from Spain (Enser) and Italy (Ama Arab) were brought to Cairo. From one day to another, the Zabaleen were pushed out of the garbage business, with no compensation for the loss of livelihood.

With little local knowledge and trust from the citizens, the foreign companies quickly discovered how challenging it is to collect garbage in a city like Cairo. Without proper law enforcement and waste management infrastructure, the foreign companies realized how much trust and flexibility means for the garbage business. Not only did they fail to understand how to manage the trash flow of a city like Cairo, the new arrivals also ignored their pickup routs and continued paying the Zabaleen for collecting their trash. The companies realized that keeping the Zabaleen out of the operation was not an option if they wanted to stay in the business. Furthermore, because of the social stigma connected with being a garbage collector, companies found it difficult to recruit staff. As a result, the companies had to reintegrate the Zabaleen in the business, and many joined united under an umbrella union called Workers in Cleaning, Beautification and Protection of the Environment. They currently represent the interest of 38 formally registered Zabaleen companies. By doing so, they can be officially hired and considered as a voice in the garbage business. By arranging themselves, many Zabaleen can now get around 10 Egyptian pounds (1.3 USD) per home. A worker who serves an average of 10 flats a day can expect to make as much as 312 USD a month. Yet the community is still relatively poor, as many households depend on a single income.

Just to make things even more complicated, real estate speculations emerged as a new threat factor. The proximity of Garbage City to Cairo’s business center and to its historic and cultural point in Islamic Cairo, makes the area very attractive for real estate developers. As a result, public and private interest groups have suggested a resettlement of the city 25km away from its current location, claiming that it will improve living conditions for the people of Muqattam and their surroundings. It is however commonly known that if realized, a resettlement will not only undermine the waste collection system of greater Cairo but also destroy the Zabaleen community forever.

GLOBAL POLITICS, POVERTY AND THE ZABALEEN

Shaped in the shadow of the growing socio-economic disparity since the 1970s open door economic liberalization, and the 1990s IMF structural adjustment program, the Zabaleen are just one of many poor Cairo communities. Today, Egypt is a country with barely any middle class and 26.3% of the country’s population living beneath the poverty line. More than 40% of the average household expenditure in Egypt goes to food. For the poorest families it’s more than half their budgets. Additionally, Egypt has the working poor – a new social class of workers found in many developing countries – who hardly survive on their income.

With no economic growth or politic stability in sight, the struggle continues for Cairo’s poor. The slums will grow and informal settlements will be part of the city skyline for many years to come. Today, Cairo slums have grown to accommodate 3-5 million inhabitants, thus having 25-35 % of Cairo’s population live in or around slums. Cairo can only become a cleaner city if the state formally recognizes the significant role played by the Zabaleen. The formal establishment has to accept the informal arrangements as a reality and perceive these not as hubs of negativity, but those of potential and bottom up innovation. Only by doing so, Cairo can become a cleaner place. And the city deserves it. After all, the Egyptians call it Mother of the World.