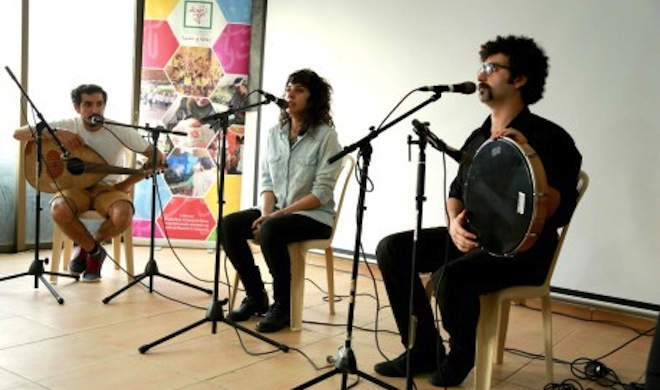 A cultural festival strives to break stereotypes around Shatila camp.

“Even though she is in pain, she’s still dancing!” said Ma’ammar El Jasem, the 13 years old Syrian sculptor, standing proudly next to his creation: a ballerina wrapped by metal wires, not knowing that he’s representing the power of survival at such a young age.

Ma’amar among other artists, regardless of their differences in age and nationality, is participating in a three-day cultural festival organized by Basmeh and Zeitooneh NGO, on the occasion of the first anniversary of their Art and Culture Centre. “Shatila: The Meeting Point” was organized with the support of the UNDP “Peace Building in Lebanon” project through the Lebanon Recovery Fund and took place on May 7, 8 and 9, 2015, in the Centre in Shatila Camp.

“Taking pictures of what’s happening in Syria is my responsibility. I need to convey this message to the world, on behalf of the Syrian people. This is how we resist”, said Mohammed Abdullah, a 33-year-old Syrian photographer.

“We are benefiting from this event to break stereotypes around Shatila camp. It’s been constantly said that this camp is an isolated zone that discourages all young initiatives. Today we showed everyone the opposite reality by organizing this festival and thus providing a common space for the youth of the camp” explains Ms. Julia Jamal, arts and cultural center coordinator.

Walking in the streets of the camp, the sound of folkloric Arabic music is heard all the way from the fourth floor where the center pounds with life amid the visible difficult situation of the camp. The festivity began on the 7th of May and lasted three busy days, inviting visitors from all over Beirut, to tour of different paintings by Lebanese, Palestinian & Syrian artists, then with Dabkeh shows by the Lebanese-Palestinian dance groups Ajras El Awde & Ahlam Laji’ moving all three nationalities to one pure Arabic groove, ending the first day with a performance by Lebanese singer Sandy Chamoun & her band.

“Taking pictures of what’s happening in Syria is my responsibility.”

Basmeh and Zeitooneh’s choir, formed of 13 young Syrian chanters performed on the second day a bouquet of classic and original Arabic songs followed by short-movies screening in addition to a performance by Maria Hasan accompanied by her band, and Tarek Said on Buzuk.

On the last day of this festival, the center hosted an interactive open debate titled “Funding Culture in Time of Distress“ where  Julia Jamal, arts and cultural center coordinator at Basmeh and Zeitooneh, Roy Dib, Lebanese artist and critic, Mohamad Al-Attar, Syrian play writer, and Anis Mohsen, Palestinian Editor discussed  the effect of the on-going conflict on Syria’s artists, writers, musicians and performers, the opportunities and challenges influencing the preservation and growth of Syria’s culture and heritage, in the presence of an excited attendance.

Just like the festival began with musical celebrations, it ended with a concert for Asa’aleek – an active Syrian band in Beirut & the multinational Furn El Shabab pop band.

“I think it’s a very constructive initiative to host different talents  and to invite everyone to be more engaged to do good for the community through an arts space promoting dialogue, understanding and accepting the other” said Mr. Luca Renda, UNDP Country Director.

“Shatila: The Meeting Point” was also an opportunity for Basmeh and Zeitooneh to inaugurate its new library – the first of its kind in Shatila – and opened its doors to Syrian, Lebanese, and Palestinian visitors who will have access to books and computers there, all free of charge and open to all members of the public.