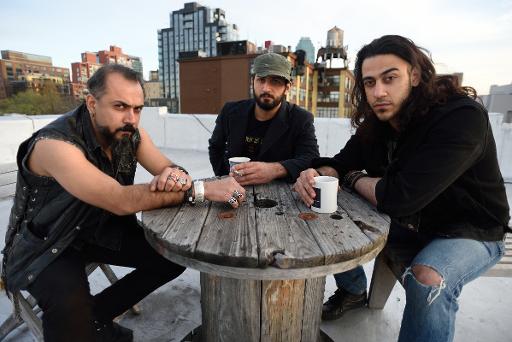 With their homeland torn by years of war, a group of Iraqis has found a form of therapy not by firing guns but by banging their heads to heavy metal.

“We didn’t want to carry weapons and go shoot people. Violence was never the solution, really,” said Marwan Hussein, the drummer and lyricist of the band Acrassicauda.

Metal, instead, provided a “passive aggressive way that we could let our voices be heard,” he said.

Acrassicauda was at the forefront of Baghdad’s fledgling metal scene as social restrictions loosened following the US invasion in 2003, appealing to youth whose causes of angst were considerably more intense than those facing middle-class fans in the West.

Yet, like so much in Iraq, the path forward was painfully slow.

The band fled Iraq after its practice space was bombed. But this April — resettled in New York and nearly 15 years after the original lineup formed — Acrassicauda has finally released its first full-length studio album, “Gilgamesh.”

Singer Faisal Mustafa, clad in a leather jacket and with a salt-and-pepper goatee, said that heavy metal was “therapeutic.” He can vent feelings of rage, but in a socially acceptable way.

“You can express them through music, through your soul. And once you unleash that anger onstage, you define who you are –but you’ll be known as an artist, (not like) in real society,” he said.

A nod to Iraqi heritage

“Gilgamesh” shows the influence of Acrassicauda’s thrash metal heroes such as Metallica, Slayer and Testament, whose guitarist Alex Skolnick co-produced the album.

Marked by minor-key buildups and high-octane solos by guitarist Moe Al Hamawandi, the songs are carried forward by power chords and Faisal’s sweeping voice, which ranges from a deep growl to a rich vibrato.

“Gilgamesh” is only obliquely political. The album title is a reference to the ancient Mesopotamian epic that is often considered the first work of literature — a nod to Iraq’s rich past, and to continuity.

The lyrics — in English, which the band members speak flawlessly — delve into themes of rebirth and the quest for freedom, but all cast in the imagery of mythology and not modern-day politics.

The members of Acrassicauda — whose own name comes from the Latin for a black scorpion common in Iraq — insist that the music speaks for itself and decline to offer opinions on Iraq’s latest troubles.

“We always said that we don’t want to be a political band, but I think that’s kind of an understatement,” Marwan said.

“Because politics — I wouldn’t say it ruined our lives — but in a way it ruined so many people’s lives.”

From rockers to refugees

Acrassicauda fled in 2006 after facing persistent threats from hardliners, whose accusations against the band ranged from Satan worship to, at the very least, spreading degenerate Western values.

But the band members consider themselves among the lucky ones.

They were unhurt in the attack on the basement where they practiced and they had gained a following through a US-Canadian documentary, “Heavy Metal in Baghdad,” which appeared at major film festivals.

Vice, the media group behind the film, raised support for the band members as they headed to Syria and then Turkey and ultimately, by early 2009, to the United States.

The band members take solace in maintaining a fan base in the Arab world, saying they have even been recognized in airports.

But the niche following did not translate into a successful or even sustainable music career once they settled in New York and struggled to make ends meet.

“The opportunities are here but you have to work harder than you ever thought. We all did restaurant jobs, food service — all sorts of shit — because we wanted to play music,” said Hamawandi, the guitarist, who sports flowing locks of curly hair.

“Everyone who lives outside of the United States thinks it’s so easy in the States, that you make so much money and have an amazing life, and you have the best house.

“You come here, and the reality check is totally different.”

Acrassicauda released an EP in 2010 — the pointedly titled “Only the Dead See the End of the War” — and later toured the United States and opened at a major New York venue for metal giants Ministry.

But the cost of professionally making a full album remained prohibitive.

“We’re not getting any younger, but we still have that same spirit from 15 years ago,” Faisal said.

Despite their reluctance to discuss politics, the band members do have one fervent wish — to play again in Iraq.

“It took the band 15 years to do an album, and it might take another 15 years to make it to Iraq. And I could be performing drums in the back on a wheelchair with an oxygen mask,” Marwan said.

“But I think the whole story of this band is long-term dreams. There is always light at the end of the tunnel.”