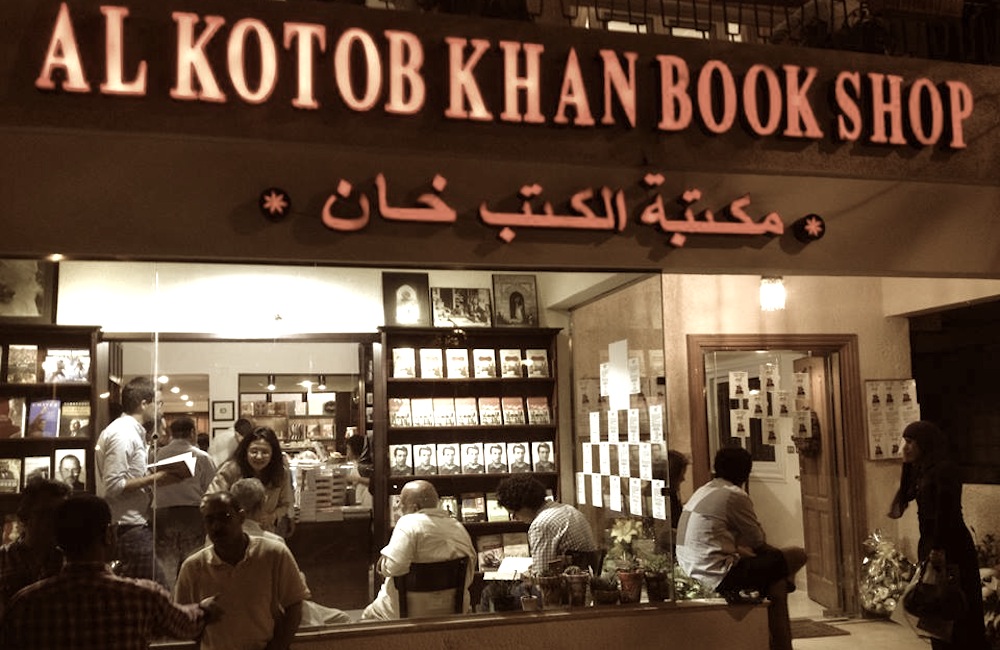 Publisher Karam Youssef shares some of her insights from running a bookshop that's become more than just a venue for selling books.

Karam Youssef started out as a mass-media major at Cairo University, after which she worked for fifteen years with AT&T and Hewlett Packard. But all this time, she said, it was her dream to work with books. In a talk she prepared for the fair’s professional program, she discussed how running a bookstore is not just about selling books, but about building community.

Youssef opened the first branch of her bookstore, Kotob Khan, in a neighborhood in southern Cairo.

“It was my wish that there would be a place to take care of books, where a book—that sentient being—can feel safe.” That’s how she settled on the name, she said. “A khan for books, or a motel for books, where books can rest during their long journey and start again on their eternal travels.”

So it came to be that, at the beginning of 2006, Youssef gave up her comfortable job with Hewlett Packard to found a bookstore and, later, a publishing house.

“I did not inherit Kotob Khan,” she said. “Kotob Khan was for me an existential choice. And from the start, its inclination was toward Arab culture. This is expressed first through the bookstore’s logo, which was inspired by Hassan Massoud’s designs in beautiful Arabic calligraphy, even though the trend at the time was toward using Latin letters. Next, there was the content: The bookshop took as its role model the great libraries in human history, and for this reason selling books was not our main aim.”

Kotob Khan’s goal is quite different, Youssef said. It was and still is caring for the book, the reader, and the writer.

“And so it was that Kotob Khan launched on Laselky Street, in Maadi, on the fifth of May in 2006, and I dedicated myself to it completely after resigning my job.”

Once the bookshop opened, it quickly became not just a place to buy books, but a space to read and research, a cultural and social center. And, as Youssef said, with the launch of a second branch “it became a warm destination for anyone who wanted to read a book in a calm atmosphere and maybe have a cup of coffee.”

As a social hub, Kotob Khan has hosted many activities, including “our annual creative writing workshops, which began with the launch of Kotob Khan and continue to this day. This April through September, twelve young writers will gather with novelist Lana Abdel Rahman to find their way in the process of writing a novel. Previous workshops have been supervised by great writers such as Youssef Rakha, Mohammad Kheir, and Yasser Abdel Latif. These workshops brought great and serious writers to the Egyptian literary scene, one of whom even won a prestigious Egyptian literary award (the Sawiri Prize).”

Kotob Khan also has a monthly book forum, bringing together authors and readers. These forums, Youssef said, “always send books to the top of the bestseller lists.”

The shop also hosts book signings, discussions, and indie movie screenings. “Kotob Khan has worked as a safe harbor for cultural groups, and we welcome the wide spectrum of the Egyptian literary scene.”

But being a cultural hub means not limiting bookstore events to literature alone. After events in 2011 in Egypt and across the region, Kotob Khan was a place where people could go to hear about their human and political rights through a series of lectures given by social critics, lawyers, journalists, MPs, and candidates for parliament.

Yet Kotob Khan never lost its focus on books, “whatever their nationality, whether Arabic or foreign.” In addition to Arabic books, “we import a variety of books that carry enlightenment values to the Arabic-language reader, and specifically to the Egyptian reader. We take the side of books that serve these cultural aims: modern philosophy books, social critiques, the humanities, psychology, politics, economics, and literature.”

“Poets know their way to Kotob Khan,” Youssef said. At the store’s Degla branch, “there is a special day each year, the 29th of September, when poets around the world come together for ‘100 Thousand Poets for Change.’ On that day, Egyptian poets and audience members gather to listen to one another, and also to the trees and to the flowers that surround Kotob Khan.”

But Youssef didn’t stop there in creating a books community. She has since launched a publishing house that “leans towards young writers and their debuts,” as well as a desire “to launch a serious translation movement through a group of the best Egyptian and Arab translators.”

Through all this, she stresses literary community over financial considerations, despite the difficulties of the market. It is the community, after all, that will sustain a bookstore through good times and bad.

She also added, in terms of publishing and bookselling challenges:

“I want to say that the lack of a distribution database, which would contain all the details about bookshops and book prices in region poses a huge difficulty for us and for any publisher who wants to sell into the region. Today, after the emergence of the ebook and its applications, and with a market that’s constantly changing both locally and internationally, we must look around and wonder about bookshop policies, publishing policies, and censorship and the role that the latter plays in importing books, whether Arab or non-Arab.

Also, while much can be downloaded off the internet for free, at the same time our banks don’t allow the use of credit cards online. All these are questions that need answers.”

This piece ran – in part – in Abu Dhabi International Book Fair’s magazine, as well as on Marcia’s blog, ArabLit.