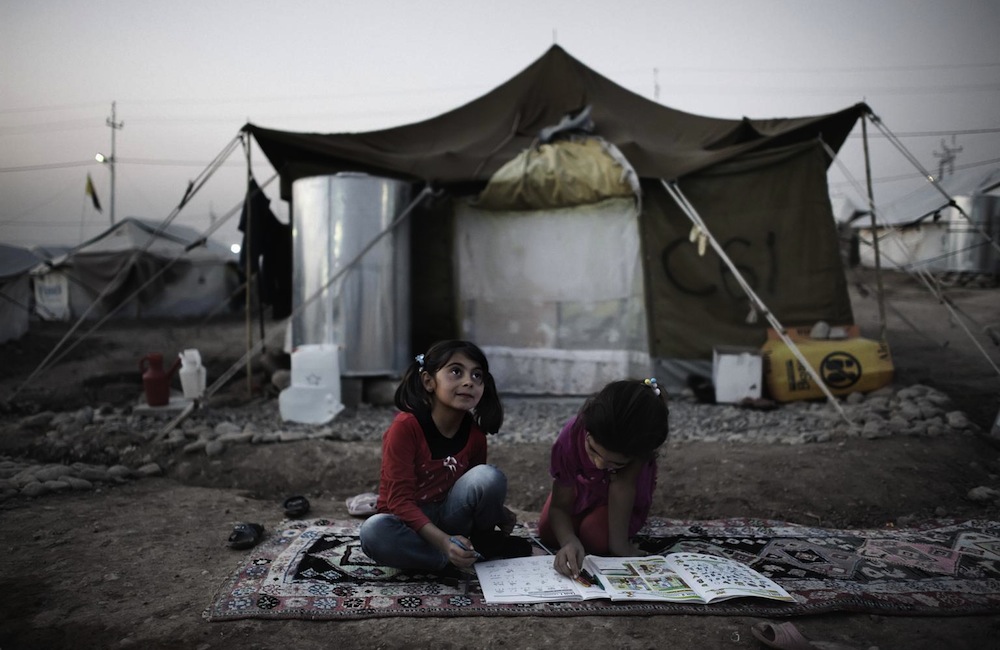 SouriaLi, a Syrian radio station, emerged after the uprisings had started in 2011. It, among others, tackles issues about children in the Syrian context. Your Middle East contributors Hakim Khatib & Mohammad Hamdash has more.

Radio SouriaLi produces material for children and Syrian families aimed at supporting the distressed psychologically and morally, offering general knowledge as well as providing a stage for children to express themselves as “children”. In programs such as “we tell stories or we sleep” (in Arabic: Nihki wallannam), they focus on the beautiful memories of children’s games, stories and jokes from the days before the conflict. It also aspires to preserve Syrian culture from decay since millions have now emigrated to other countries across the globe.

“We hope to inform and educate active individuals and inspire them to work towards the future of a democratic and better world,” a representative from SouriaLi station told us.

While SouriaLi offers children the possibility to express themselves, like sharing ideas on how to contribute to the future of Syria in programs such as “childhood dreams” (in Arabic: Ahlam Tufoula), it also broadcasts the traditions of Syrian children as they were when they actually went school – and even the way children used to play back then. In addition, the station gives children the chance of learning through playing, which was an unconventional method for the traditional schools before the war.

In several audio podcasts similar to “childhood dreams”, SouriaLi gave children an opportunity to freely express their opinion and to ask and answer questions forbidden under the rule of Hafez Al-Assad and his son Bashar Al-Assad. One of these questions was: “If you were the president of Syria, what would you do?” To be sure, answers were both innocent and sweet, but also seriously affected by the grievances of the Syrian people. One child said, “I would care for the poor,” and another: “I would build as many schools as possible.” A third promised to “respect the law so people learn from me.”

These questions and answers produce a structure of thought unlike the learning structures previously existing in Syria. While learning structures in Syria were influenced by a totalitarian political party, the Baath Party, SouriaLi attempts to produce programs that foster an environment of critical thinking, in which children learn the difference between, for example, the concept of government and the concept of state.

According to our analysis, the main feature SouriaLi employs is the narrative and dialectic style. Through its programs for children, SouriaLi uses simple, interesting and traditional stories such as “Cinderella” and “The Sleeping Beauty” and tries to compare them to the reality in Syria, focusing on the positive prospects for the Syrian future. In a narrative style, SouriaLi sends messages to children urging them to focus on building rather than destroying, forgiveness rather than revenge and tolerance rather than extremism.

Through programs such as “Bridges to teach children and youth in Syria” (in Arabic: Jusour lita’aleem atfal wa shabab souria), the team of SouriaLi confronts children’s involvement in armed struggles and its complications for Syrian families. This program, in particular, moves a step forward from theory to practice by hosting activists involved in fundraising for building schools, finding scholarships for students at universities, or even by reaching actors and experts to teach Shakespearean theatre to children in Zaatari Refugee Camp in Jordan.

SouriaLi doesn’t forget social minorities such as the physically and mentally challenged children and orphans. While orphans and disabled persons certainly could be found in Syrian society before the war, their numbers have been multiplying since the armed struggle started. SouriaLi sheds light on the difficulties and necessary measures needed to involve and integrate these children in the society.

SouriaLi occasionally produces English material from which we chose the following:

Special Interview 84 – A message from Rwanada to the youth of Syria.
Special Coverage 80 – 100 Years of Chemical Weapons.
Surviving Jihadists’ Kidnapping
You can find more material here.

And here are a few links to some SouriaLi’s podcasts in Arabic:

Hakim Khatib: A political scientist and analyst works as a lecturer for politics and culture of the Middle East, intercultural communication and journalism at Fulda and Darmstadt Universities of Applied Sciences and Phillips University Marburg. Hakim is a PhD candidate in political science on political instrumentalisation of Islam in the Middle East and its implications on political development at the University of Duisburg-Essen and the founder and editor-in-chief of the Muslims Politics and Culture Journal (MPC Journal).

Mohammad Hamdash: A former member at the financial transfers department of Baraka Bank in Syria and an expert in international law. Mohammad is a licensed lawyer from Damascus University Council. He graduated his Bachelor’s in international law in 2010 and his Diploma as a practicing lawyer and an international arbitration advisor in 2013.