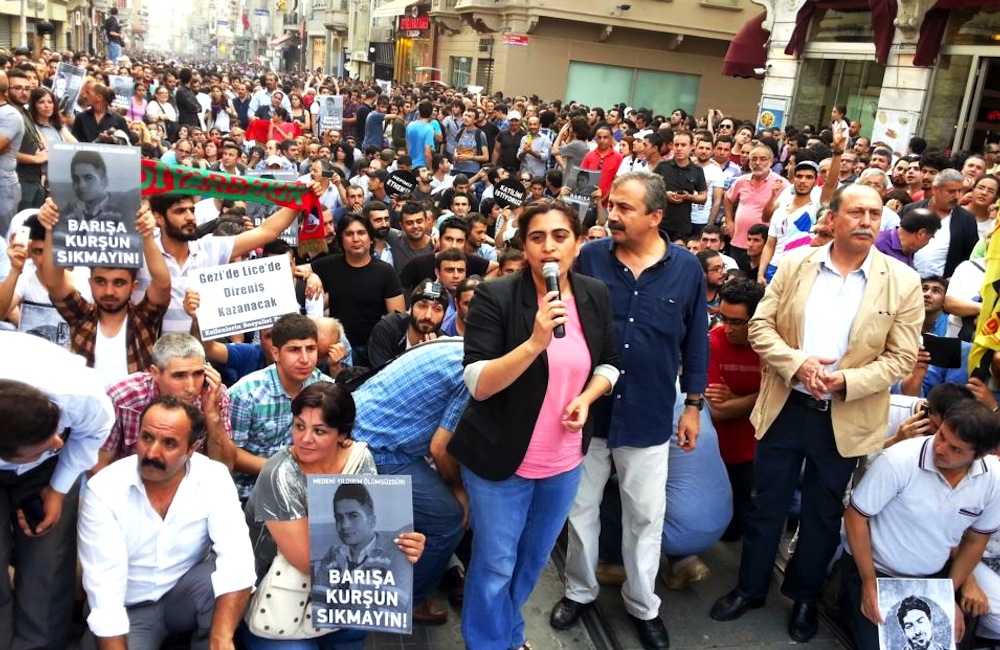 Dr Omer Tekdemir analyzes a radical force in Turkish politics, which strives to protect democracy and represent all identities in society.

HDP has already started to challenge the macro politics by attempting to radicalize the country’s ‘new conservative democracy’ currently formed within a religious, traditional and neoliberal perspective by the ruling AKP (Justice and Development Party) who have established an existing hegemonic culture (‘new Turkey’) against the previous Kemalist hegemonic power that was based on ‘extreme’ secularist, modernist and nationalist principles (‘old Turkey’).

Furthermore, the HDP is constructing an alternative politics (demanding what I call an ‘other Turkey’) beyond the usual party politics and political life of Turkey, by means of a political project of radicalizing pluralism and citizenship within a radical democratic context, which also offered a future-oriented project for re-designing the Middle East.

In doing so the HDP is ‘engaging with’ democratic institutions by utilizing the parliamentarian system, operating many municipalities or employing other state apparatuses and hence re-articulating the antagonistic relations in the hegemonic power struggle with the existing regime rather than withdrawing from the system. While the election manifesto is offering a ‘new life’ and notion of ‘we’ to create a new ‘collective political identity’ in civil society by embracing all ‘otherized’ and excluded identities in the public sphere.

This new hegemonic articulation has emerged during the so-called post-democratic era of the country. As the centre-right and centre-left parties are not responding to the demands of these alienated and peripheral citizens, so the system becomes engulfed in an ‘organic crisis’. Against this, in a Wittgensteinian concept of ‘language game’, the HDP has already started to use a political philosophical language more effectively and strategically in such a ‘post-political’ environment in which people have started to believe that there is no alternative democratic politics for the country. Hence, some words are re-defined in ‘the political’ approach by the HDP.

Therefore this new politics is represented by discourses of ‘Turkeyfication’ and ‘new life’ while the HDP’s election campaign uses notions of a ‘great humanity’ and ‘We’re to the parliament’ in order to construct alliances by mobilizing the political ‘passions’ for democratic demands in the society. This understanding of politics is conceptualized in an election manifesto, the manifesto declared by the co-presidents Selahattin DemirtaÅ and Figen YüksekdaÄ, that contains crucial targets highlighted in twelve ‘provocative’ points: ‘We are women; We are youth; We are the rainbow; We are children; We are defenders of democracy; We are representatives of all identities; We are defenders of a free world; We are protectors of nature; We are builders of a safe life economy; We are workers; We are labourers; We are the guarantors of social rights’.

In this respect the HDP creates a new definition of the ‘we/them’ social and political divisions that have been defined by the Republic in a homogenous formula since it was established (1923). More to the point, the concept of ‘We’ does not see these multiple identities as staying in the private sphere, but rather seeks to create a political form of identification through radical democratic objectives. In this light, the HDP’s call to a new life refers to a radical democracy and notion of ‘We’re’ that embodies a ‘great humanity’ manifesto and brings humans to the centre of politics and ignores all differences within society in terms of class, gender, ethnicity, religion, ideology and other fragmentations.

In addition, the HDP was established on the legacy of the Kurdish national struggle by predominantly former pro-Kurdish political party members from the HEP (Peoples Labour Party) and to the DTP (Democratic Society Party), nevertheless it goes beyond ethnic and narrow national identity politics by offering new discourses. Moreover, as a new political project the HDP claims that the new politics moves beyond homogenous religious or ethnic essentialist identities and practices towards a radical pluralism that covers all subaltern groups who have faith in a democratic politics. On the other hand, the HDP still has an important role in the so-called peace building and conflict resolution process, moderating between the state and the PKK (Kurdistan Workers’ Party) after 30 years of armed struggle and violent conflict.

In this progressive way, the HDP seeks to tackle the democratic problems of the relations between the state and society, at a time when the country has also been waiting to become part of the European Union (EU) in order to consolidate its process of democratization, as well as to have (or maintain) economic stability. But an understanding of the EU project from the perspective of the HDP’s principles is different from those of the AKP (or CHP-Republic People’s Party and MHP-Nationalist Movement Party).

The HDP in a Wittgensteinian way of ‘family resemblance’ with the European left-wing populist parties (e.g. Syriza, Podemos etc.) and new social movements in the Middle East endeavors to radicalize the neo-liberal democracy and its institutions, thereby transforming the state apparatus in terms of a left-oriented world-view.

In this respect, on the one hand the HDP has synergies with domestic social movements, for instance Gezi ParkÄ±, 10danSonra, BirleÅik Haziran Hareketi, Azadi Hareketi, HacÄ± BekstaÅ Veli DergahÄ± and on the other hand, has international synchronies with left-wing populist parties (for example, recently DemirtaÅ has shown solidarity with the new leftist President of the Turkish Republic of Northern Cyprus, Mustafa AkÄ±ncÄ± and German’s Green and Greece’s Syriza parties have already declared their solidarity with HDP), as well as with anti-capitalist, national liberation, peripheral, occupy, and social forum types of movements.

As a result, the HDP is willing to be part of an ‘international historical bloc’ that aims to create a ‘global radical democratic public space’, and moreover a counter-hegemonic culture against global capitalism and neo-liberal democracy as a new hegemonic articulation and an alternative project.