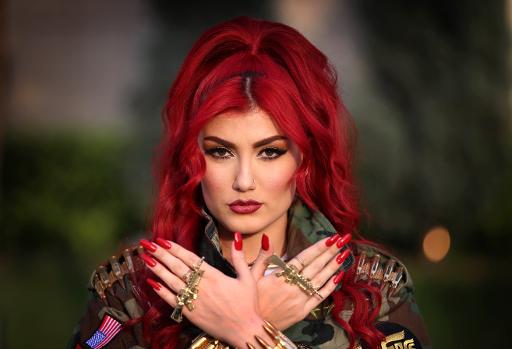 High heels, fatigues and gold rifle-shaped rings – singer Helly Luv's blend of bang and bling has made her the most popular cheerleader for the Iraqi Kurds' war against jihadists.

She visits peshmerga forces fighting the Islamic State group, which overran a third of Iraq last year, and says she filmed her latest music video in Al-Khazr, not far from the jihadists’ lines.

“I want to give something to the peshmerga because I consider myself one of them,” the 26-year-old singer told AFP in the Kurdish regional capital Arbil.

“I wore peshmerga clothes in the song to support them.”

Her latest music video, for a song titled “Revolution,” opens with a peshmerga fighter looking at a picture of himself with a young boy, presumably his son, as shelling and gunfire are heard in the background.

He tucks the photo inside his helmet and goes to fight.

The video then moves to a quiet village where children play and people sit drinking tea, but it soon comes under fire from black-clad militants driving armoured vehicles like those captured from Iraqi security forces, including a tank.

A child screams and residents flee, but Helly Luv — wearing golden high heels with a white and red scarf covering her face — strides the other way to dramatic music, unfurling a banner before the tank that reads “STOP THE VIOLENCE.”

She sings and dances next to a car with “END WAR” spray painted on its side, but footage that includes peshmerga forces counterattacking and lyrics such as “We gon’ keep on fighting” make clear she means the violence will stop once IS is defeated.

The music video hits on many themes that the peshmerga have sought to emphasise since the anti-IS conflict began last June, showing them as the brave, secular defenders of the innocent threatened by jihadist brutality.

To hammer home the coexistence message, people march in the video carrying banners with peace messages in various languages and an array of religious symbols, including the Jewish star of David and the Buddhist wheel.

The video and English lyrics are over the top and sometimes cringe-worthy, but also apparently popular, garnering 700,000 views on YouTube barely two weeks after its release.

“The song is called ‘Revolution’ and I call in it for Kurdistan and the countries of the world to unite to fight terrorism and injustice,” Helly Luv said.

“I want to show the world who the peshmerga forces are, and who Daesh is,” she said, using an Arabic acronym that the jihadist group deems derogatory.

Peshmerga officer Nawzad Saleh, said that in the days when the peshmerga were mountain-based rebel fighters, singers sang songs encouraging them to fight.

“Now the Kurdish singers have begun singing for the peshmerga in other languages, and this is a beautiful step and will result in the world knowing more about who the peshmerga are,” he said.

Peshmerga fighter Abdulrahman Ahmed agreed, saying such songs will encourage “the international community to sympathise and cooperate with us more, and support us with weapons to continue fighting these terrorists and eliminate them once and for all.”

According to her online biography, Helly Luv was born Helan Abdulla in Iran in 1988 and her grandfather fought for the peshmerga.

Her family had fled Saddam Hussein’s rule and she grew up mainly in Finland before flying to Los Angeles when she turned 18 to pursue a career in music.

With plenty of hip-swinging and hair-swishing, the rock-chick style of the “Kurdish Shakira” is in stark contrast with the sombre and pious “nasheeds” — both for and against IS — that have blossomed on social media over the past year.

When the jihadist group took over swathes of Iraq in June 2014 and subsequently attacked the peshmerga, many in the West held up the Kurds as the moral and military flagship of the world’s fightback against IS.

Of filming in Al-Khazr, Helly Luv said: “There were some who warned me against going there, but I insisted that filming be in real places affected by Daesh terrorism.”