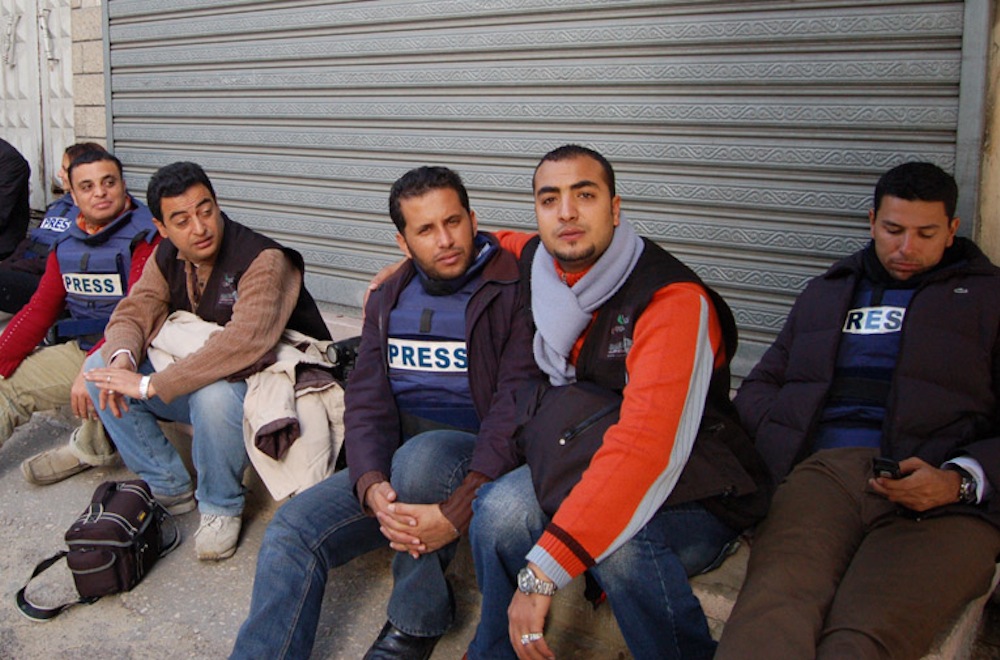 Many of Gaza's journalists share a duty to the truth. But the obstacles before them are great, and is the world listening at all?

As bombs fell on Gaza last July and August, local and foreign journalists and photographers struggled under extreme conditions to get stories and photos out of the coastal enclave. Now, a year on, they face the more ‘everyday’ challenges associated with working under siege, limited resources and the constant threat of renewed violence. Gaza’s local media landscape weathers tough terrain and an extreme political climate year round, regardless of the relative peace.

Last summer, the main threat was to their personal safety. Jehad Saftawi, a 23-year-old Gaza City-based photojournalist for the IMEU, says, “it’s hard to live in these conditions, let alone work. I had to watch out as shells fell all around me, send reports and updates from dangerous situations in the field and spend days without water relying on a generator and car battery to charge my phone, laptop and camera and for light. Safe shelter was also a big concern; I live in an eleventh-floor apartment and random shells hit high floors close by.”

Back then, of course, the whole world kept a close eye on Gaza’s plight. With much of the focus now shifted towards events in Syria and Yemen, one of the biggest challenges for Gaza’s journalists is making sure that people are still listening, and that they understand the reality of the situation and life in Gaza.

Since August’s ceasefire, Jehad’s most important task, as he sees it, is fixing the gulf between the mainstream media’s portrayal and the reality. “I cover the still untold stories of the massacres of Gaza’s families, the scale of destruction, people suffering from the cold in the shelters and caravans, those who died trying to evacuate their homes in the Shujaiyeh neighbourhood and the refugee crisis. I’m working hard to show the world the difference between what they hear on the news in their homes or at work and the facts on the ground.”

A major news agency reporter, who wishes to remain anonymous, says, “There’s no shortage of news in Gaza. I’ve reported on what people do in the aftermath of war, how they live after losing their homes, how the ceasefire is holding, border crossings, public opinion, economic suffering and also, of course, some reporting about brighter, positive things at odds with the grim reality around. I write about whatever might be interesting to the outside reader.”

Duty to the truth

Rana Sweis, media researcher and author of the Open Society Institute-sponsored Mapping Digital Media Study for Jordan, says, “Journalists continue to do this work because they believe the world must know what is taking place. Unlike activists or citizen journalists, professional journalists have to uphold the ethics of the profession — to be balanced and factual in their reporting. Their loyalty is to the truth, not to a party, group or sect. In today’s Middle East, this is not easy.”

Snapshot from documentary “Journalists under fire”

Middle East Eye’s Gaza correspondent Mohammed Omer was kidnapped in February by a group claiming to be the Islamic State, who interrogated and tortured him for a few hours. He recently published his book, ‘Shell-shocked: On the ground under Israel’s Gaza assault’ in May.

In it, he talks about the dilemma of working in a war zone while feeling a sense of responsibility: “I ask myself if I should take my family to the Netherlands, where my son was born, press on with my PhD studies at Erasmus Rotterdam and Columbia University and try to forget the F-16s and nightmares Israel reserves for us. But I’m a journalist, and I owe it to my people and the Israeli people to get to the truth.”

Like all Gaza residents, local journalists must also weather the effects of the siege on daily life and their work. Lara Aburamadan, 23, is a journalist and freelance photographer living in Gaza City. She has penned pieces for The New York Times and Al Jazeera about a Nordic film festival in Gaza interrupted by war and her daydreams about crossing the border at Erez. After the war, she says, despite returning to their “normal lives”, journalists continue to be affected by the everyday mundanities of the blockade.

Light and power for mobile phones and laptops are of limited supply in Gaza: “We have eight hours of electricity a day, sometimes just six if Israel doesn’t allow any fuel in.” This limits productivity and output. “The result is much weaker quality of work. When you live under siege, you face difficulties with everything.”

“Wherever I am, I will honour my commitment and responsibility to my people and to the world”

Because they cannot move freely in and out of Gaza, and the Israeli forces maintain a tight grip on the borders, gaining access to new equipment is a slow and tedious process. Jehad is currently facing difficulties in trying to upgrade his photography gear. “It’s a very long and complicated process,” he says.

Kareem Abu Samra, a 24-year-old photographer from Khan Yunis, used crowdfunding to raise sufficient donations to repurchase his DSLR, which was destroyed in an airstrike. His friend bought it for him in the West Bank so that his uncle, who was over there receiving medical treatment, could bring it back to Gaza with him. Predictably however, it didn’t pass through security. Before and during the war, his photography was picked up by Gaza news agency APA Images and won him a UNRWA photography prize. Months later, he is still without a camera. ”Israel kills dreams, too,” he says.

The threat of Hamas

Although this is the last thing you will hear journalists talk about, if at all, Gaza’s media landscape also feels the pressure of Hamas’ rule. In a piece published on TheTower.org last August, veteran Middle East journalist Mark Lavie recalls when “a reporter for a European news outlet told a friend that he saw Hamas gunmen firing rockets from outside his hotel, but he didn’t take pictures, certain that if he had, they would have killed him. He told the tale only after he was safely out of Gaza.”

Owing to the difficulties and long waiting times associated with leaving Gaza, local journalists are unlikely to expose Hamas crimes or be too critical, both due to fear of retribution and because presumably it would distract from who the biggest aggressor is: Israel. Indeed, it was Amnesty International who published a report in May 2015 on Hamas’ “spine chilling” torture and murder of Palestinians accused of collaboration with Israel.

“Violence is part of the pressure that Israel places on Palestinians,” says Mondoweiss correspondent and independent journalist Dan Cohen, who has spent four months in Gaza this year and last. The issue covered by the Amnesty International report has to be seen as part of the bigger picture, he says.

If Gaza’s journalists have a responsibility towards the truth and towards people, the responsibility of the world and every one of us is to listen. “We need real pressure in many forms to stop the racism that Israel perpetrates,” says Jehad. “This is the longest and the last occupation in the world, and there is a stigma on humanity that they remain silent about this.”