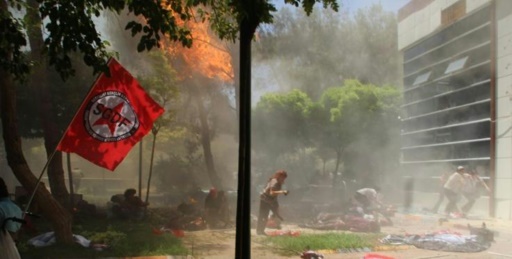 A deadly suicide bombing in southern Turkey appears to be part of the Islamic State group’s war against the Kurds, and shows the country’s growing vulnerability to the conflict in neighbouring Syria, analysts say.

The attack on Monday on a gathering of pro-Kurdish activists in Suruc along the Turkish-Syrian border, which killed at least 32 people, bore the hallmarks of the Sunni extremist organisation.

“Thus far, even without an IS claim of responsibility, the group seems the most likely perpetrator,” said Charles Lister, an analyst at the Brookings Doha Centre.

“The attack method, the specific target and the political implications of the attack all point towards an IS motive, for now.”

Turkey was quick to blame IS for the bombing of the cultural centre — the first time it has directly accused the group of carrying out an act of terror on Turkish soil.

The young victims were preparing for an aid mission to the devastated Syrian town of Kobane, which became a symbol of resistance against the jihadists, who were driven out by Kurdish forces in January.

Since then, the Kurdish People’s Protection Units (YPG) have gradually seized territory from IS in northern Syria with support from US-led air strikes.

Their advances have prompted a counteroffensive, with IS attacking Kobane as well as the cities of Hasakeh and Qamishli in the past month alone.

Aaron Stein, a non-resident fellow at Washington-based think tank the Atlantic Council, described Monday’s attack as a “spillover of the Kurdish-IS fight” in Syria.

Rather than targeting Turkey, Stein said the Suruc bombing appeared to be “more of an attack on Kurdish sympathisers of Kobane”.

He likened the blast to an attack on a rally organised by Turkey’s main pro-Kurdish party in Diyarbakir, which killed four people in June.

“We have seen an uptick in violence against Kurds in Turkey,” he told AFP.

Analysts noted that the attack also follows a recent campaign in which Turkish security forces have arrested dozens of IS militants and sympathisers in raids across the country.

It follows years of criticism of Ankara for allegedly turning a blind eye to the growing power of IS, which has used crossings along Turkey’s long border with Syria as a route to bring in foreign fighters and weapons.

“There have been a number of arrests of IS sympathisers, and in general it seems like there has been a real but late crackdown on IS in Turkey,” said Max Abrahms, a terrorism expert and professor at Northeastern University.

“The fact that there would then be presumably an IS attack against Turkey isn’t at all surprising.”

Turkey’s main aim in the Syria conflict has been the ousting of President Bashar al-Assad and containment of pro-Kurdish groups.

Despite its tense relations with Syria’s Kurds, the Turkish government described the Suruc bombing as an attack against the nation.

Ankara accuses Syria’s Kurdish forces of ties to Turkey’s Kurdistan Worker’s Party (PKK), which fought a 31-year insurgency and is listed as a “terrorist group” by the government.

It has been alarmed by the growing power of Syria’s Kurdish fighters, and unimpressed by their successes against IS.

Analysts said the attack could strengthen Turkey’s resolve to take on IS inside its war-torn neighbour, where a US-led coalition has been carrying out air raids against the jihadists since September.

“It will only encourage Turkey to get more involved in the fight against IS… including the greater possibility of ground forces” in Syria, Abrahms said.

“This is really the only way in which I can see Turkey coming into line in terms of being a real supporter of this anti-IS coalition, if Turkey itself becomes subject to attack.”

Lister said there was a danger of more attacks on Turkish soil.

“In some respects, it’s surprising we haven’t seen more of this kind of spillover already,” he said.

“But the real concern now is that this attack could spell the start of more frequent bombings and other such incidents immediately across the Syrian border.”