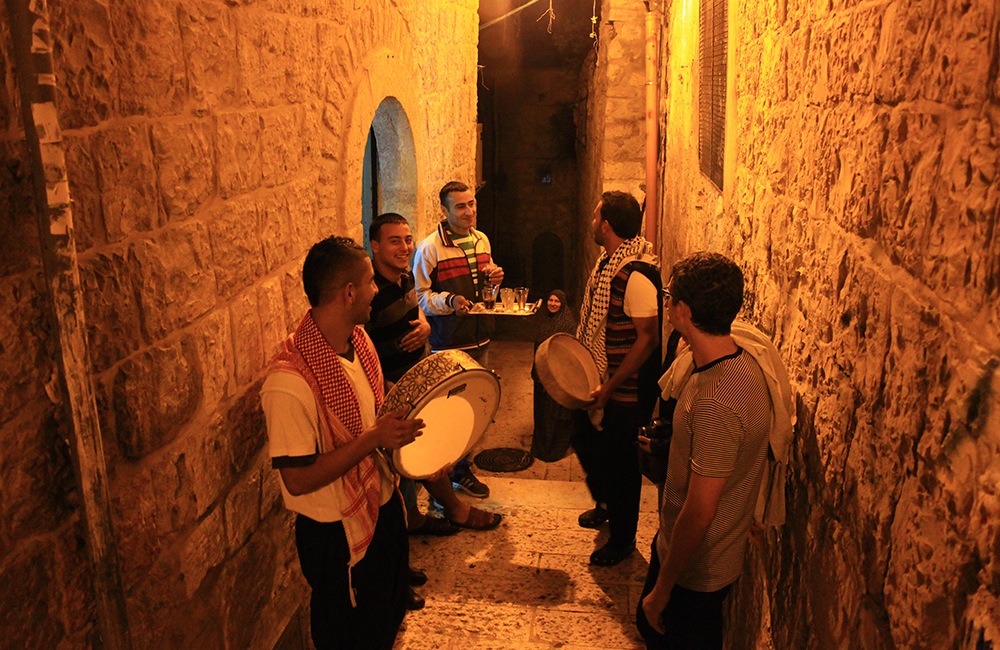 For two years, Nora Schweitzer worked as a press attaché at the Consulate of France in Jerusalem. She discovered the everyday life of the residents in the old city's tangled streets and its alleys full of secrets, and was particularly interested in the traditions and customs of Ramadan. During Ramadan 2013, Nora had the opportunity to follow a young Palestinian mesaharati during his night tours in the Muslim quarter of the old city.

To meet Baha, you have to get up very early. It is 02.40 a.m., we’re in the middle of Ramadan in Bab Hutta, a Muslim quarter in the heart of the old city of Jerusalem. Like every night of the Holy Month, Baha is getting ready for his tour through the decorated streets of the neighborhood, situated just a few steps from the famous Al Aqsa mosque.

Baha is a 22-year-old Palestinian student. Every year during Ramadan, he becomes a public waker, a mesaharati in Arabic. His role is to go around his neighborhood to wake up people for the dawn prayer and the suhur, the last meal before the sunrise and the beginning of the fast. This old tradition is still practiced not only in Palestine but also in Lebanon, Egypt, Jordan, Saudi Arabia and other countries across the Middle East.

Dressed in a seroual (baggy trousers) and a keffiyeh (a traditional Middle Eastern scarf), Baha makes his way through the empty alleyways of the old city of Jerusalem. He recites poems in praise of God and bangs his daf, a large Persian drum used throughout the Middle East. Soon, cheerful kids start following him in his tour. As he passes by, some residents wait for him on the landing of their houses to offer sweets or fresh drinks. Everybody knows Baha, who started to work as a mesaharati when he was 15.

When you ask Baha why he decided to become a mesaharati, he answers: “As a Palestinian from Jerusalem, I wish to contribute to the preservation of our historical and cultural heritage. The mesaharatis are part of the traditions of Ramadan in the old city of Jerusalem and I hope to pass that tradition on to a new generation.”

Baha and his friend in the decorated streets of Bab Hutta neighborhood. © Nora Schweitzer

Some kids follow Baha during his whole tour. These last years, Ramadan is taking place in the summer so the children are in holidays and can stay up late in the night like their parents. © Nora Schweitzer

The residents often welcome the mesaharatis with fresh drinks and sweets. © Nora Schweitzer

The mesaharatis usually accompany themselves on a light instrument like a daf (small drum) for example. © Nora Schweitzer

The discussions over a glass of carcade (a hibiscus flower beverage) or a glass of lawz (refreshing drink made from almonds) continue late into the night. © Nora Schweitzer

During Ramadan, the streets of the Muslim quarter of the old city are decorated with fairy lights and lanterns. © Nora Schweitzer


Baha’s voice breaks through the silence of the night. © Nora Schweitzer