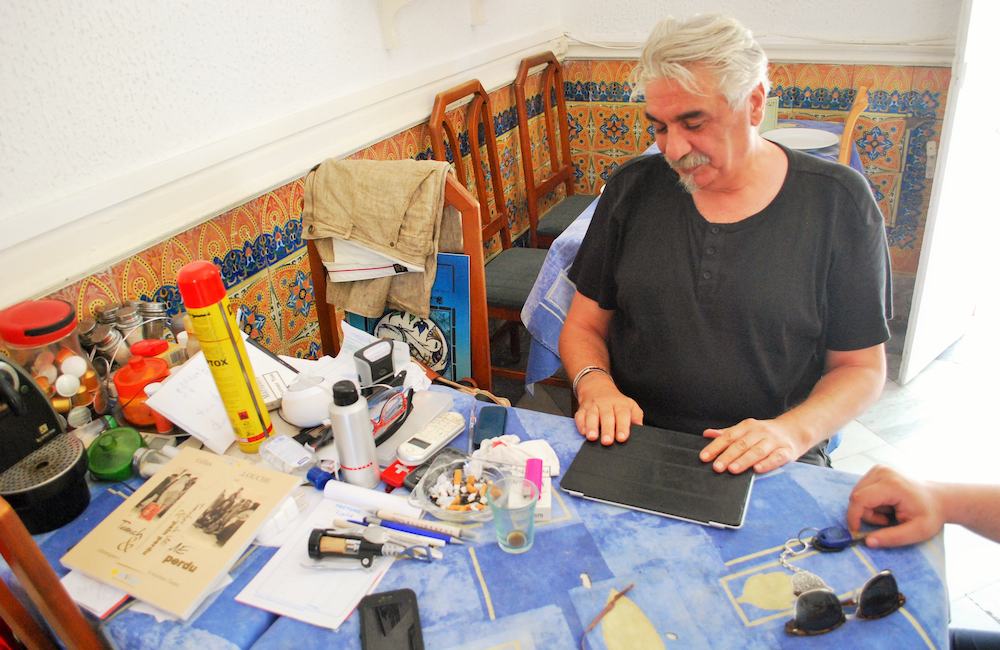 "I am just like everyone else here. Muslim, Jew, Christian. We are all Tunisians," says one charismatic restaurant owner in a Tunis suburb.

Jacob Lellouche sits in his chair, smoking one cigarette after another, while answering calls from three different cell phones. People are trying to get a hold of him to inquire about what will be on today’s menu at Jacob’s Restaurant Mamie Lilly. Named after his 88-year old mother Lilly, who still gives instructions and observes cooking preparations in the kitchen, Restaurant Mamie Lilly is the only kosher restaurant in Tunisia. Located in the historically diverse Tunis suburb of La Goulette, Mamie Lilly is a testament to the culture of tolerance which has always been omnipresent in Tunisian society.

Jacob himself is unique not just for operating his kosher restaurant, but also because he is the president and founder of Dar el Dhikra, the only organization dedicated to the remembrance of Tunisian Jewish heritage. Listening to him, one quickly notices just how much he knows about Tunisian Jewish history. He recalls the history of Jews in Tunisia, all the way back to their first arrival with Phoenicians, until present day. But even with all this pride, he first and foremost identifies with his country. “I am Tunisian,” he exclaims, “I am just like everyone else here. Muslim, Jew, Christian. We are all Tunisians.”

Although his organization Dar el Dhikra is purely focused on culture, and is not in any way religious or political, Jacob himself spent some of his time after the Tunisian Revolution in the political spotlight. He notes that he ran for a seat in Parliament because he “wanted to show that Tunisian Jews will be a part of Tunisian society going forward.” Although he lost, he believes he proved his point.

In the recent years following the Revolution, the Tunisian Parliament approached members of the Jewish community, proposing the idea to have permanent seats in Parliament for Jewish representatives. Jacob and his fellow leaders flat out rejected the idea. President of the Jewish community Roger Bismuth responded to the idea, “Forget it, and stop talking about religious minorities.” He and his fellow Tunisian Jews want to be treated the same as each and every fellow member of their country – as Tunisian citizens.

Jacob also has unique views on Israel and Palestine. “Both of those countries love war,” he says, “They get so much money from the outside, just because they are always at war with each other. They don’t want peace. I don’t give a damn about either one of them.” When asked about the idea of Israel, he is “happy that there is a place that will hopefully prevent the Holocaust from happening again.” However, he is not moving there anytime soon. “I studied and lived in France for a long time. The lifestyle there is too fast,” he continues, “I had no free time. Here in Tunis, I have a social life, I can focus on my wood carving and painting, I can work on initiatives for my organization, and I can focus on my two restaurants.” The same goes for Israel, since he is “Tunisian and has no interest in living elsewhere in this world. I’m here for the rest of my life.”

Jacob loves his family. That is clear from his commitment to taking care of his mother. When asked if he had had any woman since he divorced from his wife in the 90s, he quickly responds, “Yes of course! I have had one woman in my life since then. My mother. And she is plenty for me.” Also asked about a man walking around the restaurant, he replies, “Oh, that asshole?” followed by a dramatic pause, “That’s my brother.” His humor is weaved in with an occasional tinge of worry. The Revolution brought about much freedom, but the rise of Salafi groups in Tunisia has Jacob worried. In 2012, a group of Salafists chanted death to Jews in downtown Tunis. This happened on two more occasions; Jacob believes the first two may have been directed at Zionists, while the latter seemed like it was directed at Jews in particular.

When asked if this was the golden age for Jews around the world, Jacob confidently replies, “No. And I’m not sure if we’ve ever had one or ever will.” He may not believe in a golden age today, but he is quick to recognize that he can live his life freely in Tunisia and has the chance to stay friends with people from all religions.

Jacob is not religious himself, but respects everyone’s right to belief. Most of his friends are Muslims. In this sense, his story and outlook on life shows that endless conflict and negatively pointing out differences need not be the themes of human interaction in today’s fragile world. Every day that Jacob interacts with people at his restaurant or at a local cafe, he unintentionally spreads this peaceful message, making La Goulette, Tunisia, and the world a better place.