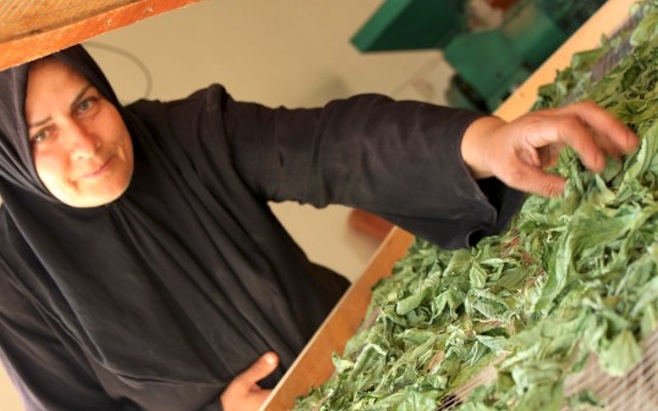 First rule for Lebanese: don’t expect anything from your government. The garbage crisis that surfaced in Lebanon in July of 2015, with nobody taking care of discharging the vast amount of waste that is produced daily in this throw-away society, led to huge piles of garbage bags that jammed the streets of Beirut and elsewhere in the country. The dysfunctionality of the Lebanese state and its political system was made obvious for all.

For anything to work in Lebanon, the initiative of the private sector is key. And thus: meet Arabsalim, the ecological capital of Lebanon. Arabsalim, a bustling village of around 8,400 habitants in the south of Lebanon, is known as a platform for the Israeli–Lebanese conflict since 1978. However, the village was also recently named in LBC Blogs as one of three Lebanese towns that have developed solutions to successfully manage the ever-growing amount of solid waste.

At the heart of Arabsalim’s waste management lies Zainab Moqalled, a former Arabic teacher at the high school in nearby Nabatieh. The ever energetic Mrs. Moqalled is 79 years old and received her PhD in Arabic language five years ago, at the age of 74. In 1995, when Arabsalim was still under Israeli occupation, she anticipated the future challenges of garbage, believing that only by sorting and recycling its waste the community could be saved from the chaotic disposal of trash – burning and burying it in landfills – that is still the rule in Lebanon today.

Mrs. Muqalled began by sorting her own trash in her own backyard and later invited a group of women from Arabsalim to introduce them to her idea. These women were excited about the concept and immediately started to sort waste themselves. “Zainab Moqalled is a pioneer in our country,” Dareen Farhat, an Arabsalim resident with whom I communicated via email told me, “she proved that in spite of occupation, constant bombardments and governmental neglect, it is possible to overcome all obstacles when there is a strong belief and the will to protect our nature.”

The start wasn’t easy. The pioneer ecologists from Arabsalim divided the village into sectors, with each woman being responsible for one sector. They would make periodic visits to their sectors, meeting the housewives, explaining the process of waste sorting and encouraging them to commit to this new approach.

In 1998, Nidaa Al Ard (‘Call of the Earth’) was founded. By establishing a NGO the women of Arabsalim wanted to put their efforts in waste management on a more solid ground. The NGO soon received donations from the UN, the Italian embassy and Germany, and a modest support from the local municipality. “But when things got rough,” Dareen Farhat told me, herself an active member of Nidaa Al Ard, “Dr. Zainab would pay from her own money to back up the NGO until new donations would flow in.” Today, Nidaa Al Ard members pay $40 per year. However, ‘Call of the Earth’ also helps to dispose the garbage of non-paying locals.

The members of the NGO often participate in training courses and workshops to improve their performance. In March of 2015, a delegation of Arabsalim visited the Netherlands to learn from this country’s experience with trash management. The trip was financed by EYH (Expand Your Horizon), a USAID-funded project which aims to build technical and professional capacity of Lebanese organizations and their employees to play a more effective role in their communities.

For the participants the visit to the Netherlands was an eye opener. But their trip was also somewhat sobering: to achieve what the Dutch did needs the total and sincere collaboration of the government and the civil society all together. “And that is precisely what we are lacking in Lebanon,” Dareen Farhat told me.

Like in all other villages in Lebanon, everything in Arabsalim is controlled by politicians. You either belong to a certain party or you will be neglected. The central government in Beirut sometimes prevents aid to reach the municipalities and this affects the municipalities’ ability to develop projects. Corruption is widespread in all of the Lebanese ministries. As an example, Nidaa Al Ard received a donation from the European Union that would send a machine worth thousands of dollars to grind plastic to Arabsalim. The machine never reached the village – it had mysteriously vanished, only the catalogue got through. Luckily a smart mechanic from Arabsalim was able to reconstruct the machine by copying from the manual.

For a game-changing project to be successful, direct interaction with the people is a key factor. In the beginning, the NGO used to call for public meetings in the mosque or the school playground to spread the message of ecological waste treatment to the people of Arabsalim. Till today members of the NGO accompany the trash collecting employee on his way from house to house. “Any village can do what we did,” Dareen Farhat said, “but it takes determination and patience when it comes to dealing with people.” Some of them need constant appreciation, some think that they are doing the NGO a favor when sorting their waste. The members of Nidaa Al Ard never miss an opportunity to thank the people for their help.

“Zainab Moqalled is a pioneer in our country”

Nidaa Al Ard’s work stops at the step where its members interact with people, convincing them to sort their waste and gather the garbage in the NGO’s sorting center to be taken to recycling factories afterwards. ‘Call of the Earth’ has solutions for many types of waste. If they face problems, as for batteries for instance, they keep that specific waste in the center until a solution is found.

The ecological awareness of Arabsalim’s residents is not limited to solid waste only. In 2011 a project for a solar power system was announced which aimed to save electricity and reduce pollution in this southern Lebanese village. Four years later, the project can be called a success, Ahmad Noureddine, the engineer in charge, told me. 500 units have been installed so far, most of them subsidized by the municipality in order to boost the project and minimize the financial contributions of individuals in this economically underprivileged area. Solar energy is mainly used to heat water, with considerable savings on the “traditional” electricity bill.

Another pilot project in the making aims to provide Nidaa Al Ard with composting containers to implement best practices for organic waste. Again, the participation of the residents of Arabsalim is a must as the containers will be installed in different households throughout the village. Nidaa Al Ard will be responsible for collecting the composted garbage and sell it to farmers as natural pesticides with very low prices. Currently the project is waiting for the green light; to finance the project a $40,000 goal is set on a crowdfunding platform.

“I think that calling Arabsalim ‘Lebanon’s ecological capital’ would be exaggerated,” Dareen Farhat told me. “There are many obstacles that we faced and still face in our attempt to bring our idea of solid waste management to the entire village and to raise the awareness of all residents of Arabsalim.” In recent years a new obstacle has emerged for Nidaa Al Ard. Displaced people from the war in Syria have brought the population of Arabsalim to a level that makes it almost impossible for the NGO to deal with.

“A developed country is not a place where the poor have cars. It’s where the rich use public transportation,” Gustavo Petro, the mayor of Bogotà, once said. Or where people from all layers of society make an effort to deal smarter with the garbage they generate and to preserve nature, I might add. A society where women take care of progress when men fail to deliver. For this, Arabsalim is both a model and a success story.