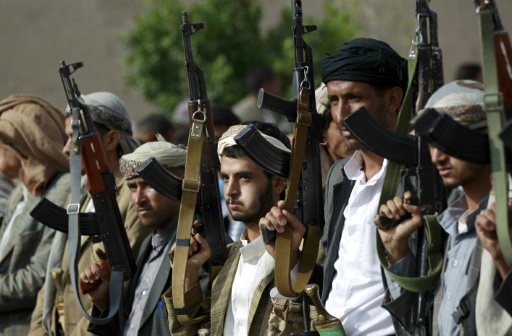 The New York-based watchdog said dozens of civilians were killed or wounded in at least seven such apparent attacks in the northwestern province of Hajja between late April and mid-July.

“Coalition forces should immediately stop using these weapons and join the treaty banning them.”

HRW said its researchers had visited four of the alleged attack sites and found unexploded submunitions or remnants of cluster munition rockets.

“Although the evidence is not definitive, several factors indicate that the Saudi-led coalition carried out the seven attacks,” it said.

It said it had identified the weapons used in the seven attacks, which struck within 19 kilometres (12 miles) of the Saudi-Yemeni border, as US-made M26 cluster munition rockets.

“I saw a bomb exploding in the air and pouring out many smaller bombs,” Muhammad al-Marzuqi, a resident from the village of Malus, was quoted as saying.

“Then an explosion threw me on the floor. I lost consciousness and somebody transferred me to the hospital with burns and wounds on the heels of the feet and fragmentation wounds on the left side of my body.”

HRW joined other rights groups urging the UN Human Rights Council to form an international commission of inquiry to investigate “alleged serious laws-of-war violations by all parties to the armed conflict in Yemen since September 2014,” when Iran-backed rebels overran the capital Sanaa.

Rights groups have repeatedly criticised alleged violations by the coalition as well as the rebels and pro-government forces during the war that has killed nearly 4,500 people, many of them civilians, since March, based on UN figures.