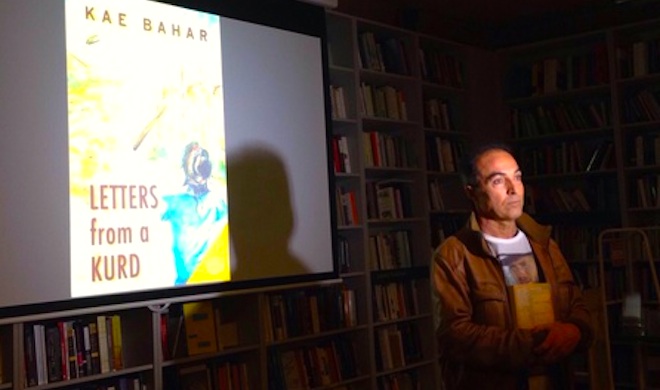 Aras Ahmed Mhamad spoke to Kae Bahar, author of Letters from a Kurd, the first Kurdish novel written in English.

Kurdish literature, just like Kurdish language, culture, cinema, and art has been overshadowed by the region’s politics and the Kurdish Liberation Movement. While Kurdish language has two major written and spoken dialects, it also has numerous sub-dialects such as Kelhuri, Hewrami, Zazaki, and Leki. Moreover, Soranis use Arabic script whereas Kurmajis use Latin script. The division of Kurdistan has not only affected the geopolitics of the Kurdish land, but it also negatively influenced its literature and language. A typical Kurd from Amed (Diyarbakir), capital of Great Kurdistan, probably won’t be able to write in Sorani or speak Sorani; likewise, a typical Kurd from Hawler (Erbil) won’t be able to understand a novel written by a Kurdish novelist from Kobane. Even to this date, there is not a unified Kurdish lexicon or Kurdish standard language as each Kurdish academic or writer tends to classify the Kurdish dialect according to their knowledge and sometimes political or party affiliation.

To learn more about the state of Kurdish literature and the importance of novels as a means to manifest the hardships and struggles of Kurdish people, I spoke to Kae Bahar, author of the first Kurdish novel written in English.

Bahar studied in Europe and worked as a documentary filmmaker and actor. He produced several films for Channel 4, BBC and Al Jazeera. His fiction film, I Am Sami, has won 24 awards in various international film festivals. He has written several feature film screenplays, and Letters from a Kurd is his first novel.

AAM: Why did you write a novel and what inspires you?

KB: My main inspiration for storytelling comes from people; we humans can appear simple but be very complex at the same time. I love storytelling. I usually do this by making films, telling stories through a combination of sound and image. In September 2007, I spent a few months searching through my many notes, synopsis, and bullet points, various stories I have written over the years to turn into fiction films. The intention was to write the first screenplay for a feature film that I would direct. During this process, I ended up writing a new story, Letters from a Kurd, which refused to become a screenplay and took its own path, ending up as my first novel. I love reading novels and always wished to see a novel written by a Kurd on the shelves of bookstores on the world market, but I did not think I was to accomplish this task myself. I spent 4 years between writing and re-writing and I am glad I did because we Kurds finally have that literary product which we can relate to on the international market.

It’s said that every novelist has a rebellious nature and spirit. What are some of the features of your novel and other works that people/critics have not realized or found yet?

My approach to my filmmaking, and similarly in Letters from a Kurd, is to break all the traditional taboos that surround us and limit us in our way of thinking, behaviors and actions. As a human, I feel the need to be true to myself, to be individual and to live and enjoy my individual freedom. I refuse to be a sheep and belong to a flock. I am prepared to face the shepherd’s dog that will bark at me because I go my way rather than following the others, and behave as the others wish to see me. As long as I do not harm you physically, I shall feel free what and how I think. I value the freedom of speech and could not live without feeling free to express myself. This is all reflected in my protagonists, and as most are Kurds, they will not go down easily with the old school, narrow-minded people. I do not mind this, I do not create to get compliments but to have reactions and to shake society. Not everyone would be happy about my work and that is exactly the purpose of my work, to make people think about my being different from them.

Is reality reflected in novels or are novels reflections of reality? Can a novel launch a revolution?

Letters from a Kurd is a work of fiction, and by no means it is biographical or semibiographical, but a reality reflection. I believe behind every art work or literary text are aims to create a revolution, sometimes this occurs gradually and at times it could come as a tempest. The best examples I can think of are Satanic Verses, Harry Potter, Mam u Zin, Lord of the Rings, etc. They are different books written with different approach and purpose therefore they launch different revolutions.

Do you think novels present a world more beautiful than the world we live in? If so, is this a good or bad thing?

Successful novels are not made of black and white worlds to describe as good or bad. There is not one specific world representation in a novel. Each world is different depending on the needs of the characters in the story and the style of the writer. However, whether the world is imaginary or reflects aspects of reality, it will always need to be true or to come across as a ‘real world’ to the reader – to make the story believable and effective. In the same way, I have created my world in Letters from a Kurd, the setting is Kurdistan, but the same Kurdistan may appear different in another novel because of the needs of the characters and the writer – you don’t spend such a long time to write a novel just to tell a fantastic story, you always want to pass on something dear to you to the readers through the world you create.

You taught/studied both in England and Kurdistan. How would you identify the differences in the education system regarding teaching novels and literature?

Because of the awful political situation in Kurdistan, where Kurds are mostly worried about how to survive, and because the Kurds were cut off from the rest of the world for so long, we had no chance to develop the skills for art and creative work of international standard. And the same goes for writing novels. I believe there is still confusion about this form in Kurdistan. I was lucky to get most of my education and creative writing training in London where writing fiction and writing novels is seen and studied as science rather than only work of sentiments and patriotism.

Daniel Defoe’s Robinson Crusoe (1719) is considered to be the first English novel. Which do you think is the first Kurdish novel?

Interestingly, when I was 16-years-old in my class 3 middle level in Zewar school, in Rahimawa/ Kirkuk, the first book I read in English was Robinson Crusoe and I loved it. It was a real eye opener and a great story of adventure and discovery of distant land, a world very different from mine. Later I also saw the film and to this day I love the story. We Kurds do not have many novels and I wouldn’t know which one I shall consider a first Kurdish novel, but among the ones I have read, I was most touched by Khasraw Jaf’s Kordara, mostly because it is very visual, has a worldly language and avoids portraying the Kurds as victims.  I do not enjoy those Kurdish texts that are written with complex and difficult words trying to be clever, trying to prove they are smart. These are boring and I get annoyed by reading them because they do not really engage you as a reader. I believe they push readers away and the writer’s own ego overshadows the story and its morals.

What is it that you try to provoke through your novel? What are the most important features of an immortal literary book/novel?

I do not see or ever consider myself as a victim just because I was born a Kurd and that is also the case with the characters in my films and stories.  Marywan Rashaba in Letters from a Kurd portrays a fully rounded hero no less than any other literary hero despite him being a Kurd and growing in a harsh and hopeless environment. Through his character, I wish to provoke the reader to challenge life and its obstacles. Basically, I make films and write because I want to go beyond what is lived and discussed on a daily basis, break the dull routine and set up challenges to face life with all its ups and downs. To do this I have to break certain taboos and traditions that tend to keep individuals and the society imprisoned. The provocation should not be the result of expressing different views as if by a politician in a political manifesto made for a political agenda. Here, we are talking storytelling and the provocation must bear out of action and reaction of your characters organically rather than imposed on them artificially by the writer.

A creative work should have no age or cultural boundaries. It should appeal worldwide and survive in time to reach different generations. The works that succeeded to achieve this are called classics and masterpieces. I believe they achieve this not only because they are written in sophisticated beautiful language, as much as they deal with real human stories and dilemmas of real life. Charles Dickens’  “A Christmas Carol”, Shakespeare’s “Romeo and Juliet” are just a couple of examples of these great literary masterpieces. I hope Letters from a Kurd will be studied, discussed and remembered for a long time after people (have forgotten) about me as the writer.