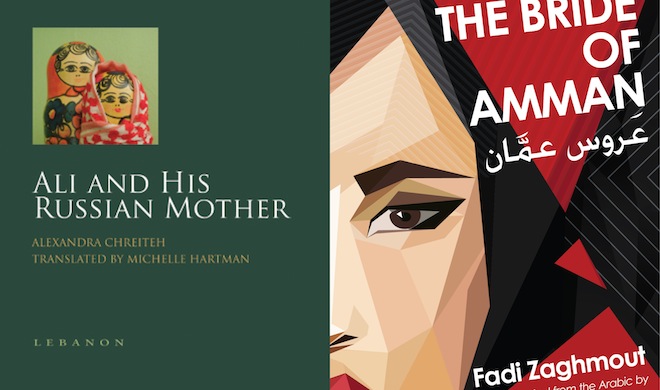 When blogger Fadi Zaghmout’s debut novel, Bride of Amman, was released in Arabic in 2012, it was good medicine.

It wasn’t just the novel itself, but Zaghmout’s expert steering of it. On her blog, Nadia Muhanna writes about an interview with Zaghmout on Jordanian TV several months after the book’s release. His interviewer referred to a gay character in the novel as shaz, an offensive term. Zaghmout corrected the presenter, using the term muthley. “By the end of the interview,” Muhanna writes, “the presenter was using ‘LGBT-friendly language.’”

Zaghmout’s fast-paced novel, translated into English by Ruth Ahmedzai-Kemp (2015), is as much a social project as a literary one, a moderate push toward sexual and gender liberation. One feels, while reading it, that it was less important to Zaghmout to craft the great Jordanian novel than it was to show that women’s and queers’ lives matter. Fair enough.

It’s sometimes said, as I wrote the other day, that there are three sweeping taboos in Arabic literature: sex, politics, and religion. (One wonders what could possibly remain the province of such impoverished novelists.) Clearly, depictions and criticisms of all three exist in lively forms in the Arabic novel, and while there’s not enough raunchy sex to compete with Ibn al-Hajjaj, there’s certainly enough to scare the eyebrows off most Anglophone readers. Also, how many “taboo-busting” novels can we read before we wonder about the strength of this taboo.

But positive, normalized depictions of gay male relationships are a different story. There’s no need to shout taboo to recognize that there just aren’t many of them.

Lesbian sex has been explored relatively non-judgmentally in Syrian novels like Nihad Sirees’s A Case of Passion and Samar Yazbek’s Cinnamon; as well as in Saudi novels like Siba Al-Herz’s The Others and Yousef al-Mohaimeed Where Pigeons Don’t Fly, although, in the latter, mention of lesbian sex was “cleaned up” in the English translation. But lesbian sex doesn’t challenge social conventions like gay men do, and indeed Sirees was writing about what he said was a widely accepted practice. He has said, in a public talk, that he saw no repercussions for A Case of Passion, unlike his anti-regime writing.

Gay men who write from their own experience, including Moroccan author Abdellah Taïa, who writes in French, have largely remained at the margins of Arabic readerships. But the ally novel has had a slightly different reception. It’s difficult to know where to place Tawfiq al-Hakim’s positive mention of homosexuality as among the things “young people do” in his essay-fiction collection Revolt of the Young (1984).

After that, there was Hoda Barakat’s Stone of Laughter (1990). The author, one of the finalists for the 2015 Man Booker International, said in a 2004 interview with Brian Whitaker that “there is a gay man in my first book but it’s not shocking because he narrates a real sentiment of love. He isn’t there to make paysage. He is something you cannot refuse – you have to admit – because he suffers and he’s really in love and when I describe how much he is in love and how much he suffers and the beauty of the other (man) I take a passage from the Qur’an.”

She continued: “Nobody was shocked because it’s really … I don’t know why … I took it step by step, from the feeling, not in a sexy way or a shocking way. People accept it and they feel what I feel, really. I respect gay people very deep in my heart – it’s not a pose.” And: “I haven’t seen any attacks on me as a Christian writing gay stories and using images from the Qur’an.”

Of course, the world of literature has much looser policing than film, for instance. Gay men have seen steady persecution in Egypt, and the reputedly first Egyptian movie with a gay male protagonist was Hani Fawzy’s Family Secrets (2013). A review in Mada Masr says the movie “doesn’t so much tackle (the character’s queerness) head on as poke at it with a stick.” The film ends with the message that being gay is an illness, and the protagonist must struggle to overcome it. Mada Masr’s review doesn’t mince words as it concludes: “Being a gay man in Egypt is indeed already a struggle without this fucking film and its tired old clichés, lurid misinformation, and badly played out melodrama to contend with.”

So really, alhamdulillah and thank God for literature.

Khaled Khalifa’s No Knives in the Cities of this Kitchen, shortlisted for the International Prize for Arabic Fiction (IPAF) and long overdue in translation, features a gay character, Nezar. Khalifa was unconcerned by any criticism:

“As for Nezar, he is the only character who is at peace with himself. It is also necessary to acknowledge that homosexuals do exist historically. And now Arab societies are increasingly accepting them.”

Perhaps the most striking portrait of a gay character in recent memory — among those crafted by an author who is not a homosexual male — is Ali and His Russian Mother (2009), written by the sharp-eyed, ultra-contemporary Lebanese novelist Alexandra Chreiteh. The book’s been translated to English by Michelle Hartman and published by Interlink this month (2015).

Ali and His Russian Mother is a character-driven portrait that centers on two individuals: the titular gay man, Ali, and a straight female narrator who doesn’t see herself as homophobic, because, you know, she’s got gay friends. It’s full of Chreiteh’s characteristic humor and psychological insight, with a particular focus on young people in Beirut. The Ukrainian-Lebanese gay man, who also freaks out over the discovery that one of his ancestors was Jewish, is portrayed in wonderful, self-hating, over-the-top glory.

Chreiteh takes not just the license to portray her gay-male lead as fully rounded, but to mock both her leads as one would mock oneself. If you miss this small gem, you’ll be sorry.