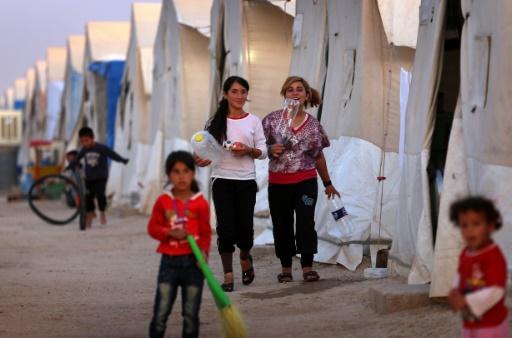 Iraq's Yazidi minority -- the target of brutal attacks from the Islamic State group -- urged the International Criminal Court Thursday to launch probes into the militants for genocide and sexual slavery.

Two Yazidi groups handed over documents to the court which show “that ISIS has systematically committed atrocities amounting to genocide and that these crimes fall within the jurisdiction of the ICC,” said Murad Ismael from the Yazda group.

But she said she could not investigate as neither Iraq nor Syria are signatories to the court and her “jurisdictional basis… is too narrow.”

The new report however specifically names some 20 foreign fighters from countries who have signed the ICC’s founding Rome Statute.

A Kurdish-speaking minority mostly based around Sinjar mountain in northern Iraq, the Yazidis are neither Arabs nor Muslims and have a unique faith which Islamic State militants consider to be heretical and polytheistic.

In August 2014, the jihadists made an unexpected push into areas of northern Iraq that had been under Kurdish control and were home to many of the country’s minorities.

The worst-hit were the Yazidis, who were massacred and abducted in large numbers when IS entered the Sinjar area.

Tens of thousands scrambled up Mount Sinjar in a panic and remained stranded there for days with no food nor water.

“It is abhorrent that such despicable crimes should be inflicted upon innocent civilians anywhere on Earth,” said Ismael in a statement.

“The Yezidi community has been shattered by the sick crimes of ISIS terrorists who sought to annihilate the Yazidis on the basis of their religious distinctiveness,” he added, using another name for IS.

According to figures from the Kurdish autonomous region, 1,280 Yazidis were killed in the IS offensive. Hundreds are still missing.

More than 5,800 were also abducted by IS, and although some 2,000 managed to escape, “more than 3,000 innocent women and children remain captive… subject to systematic rape on a daily basis,” said Ismael.

Eighty percent of the Yazidi population is now displaced and living in camps, he added.

“ISIL sought to annihilate the religious identity, traditions and the very existence of the Yazidis,” Yazda and the Free Yazidi Foundation said in their report to the ICC.

Ismael, who travelled from Houston, Texas to present the report to the court in The Hague, told AFP he was “confident that once the court reads through the details” it will decide it has jurisdiction over the case.