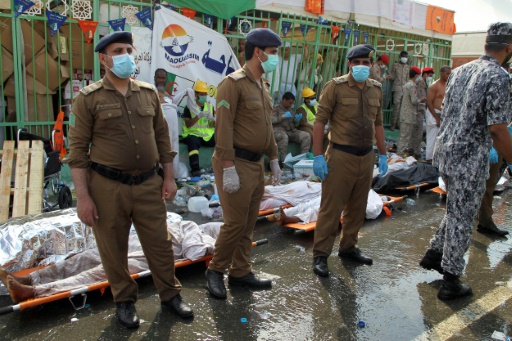 Witnesses to a stampede that left more than 700 people dead at the hajj in Saudi Arabia on Thursday blamed Saudi authorities and said they were afraid to continue the rituals.

The worst tragedy in 25 years at the annual Muslim pilgrimage occurred during the symbolic stoning of the devil at Mina, just outside the holy city of Mecca.

At least 717 people were killed and 863 people were hurt, spurring King Salman to order “a revision” of hajj organisation while authorities started a probe into the disaster.

One minister blamed the pilgrims for the tragedy, but worshippers disagreed.

“There was crowding. The police had closed all entrances and exits to the pilgrims’ camp, leaving only one,” said Ahmed Abu Bakr, a 45-year-old Libyan who escaped the stampede with his mother.

“I saw dead bodies in front of me and injuries and suffocation. We removed the victims with the police.”

He added that police at the scene appeared inexperienced.

“They don’t even know the roads and the places around here,” he said as others nodded in agreement.

Pilgrims in Mina stay in a complex of white fireproof tents big enough to hold more than two million people, and the interior ministry said it deployed 100,000 police to secure the hajj, maintain safety and manage traffic and crowds.

One outspoken critic of redevelopment at the holy sites said despite the large numbers, police were not properly trained and lacked the language skills for communicating with foreign pilgrims, who make up the majority of those on the hajj.

“They don’t have a clue how to engage with these people,” said Irfan al-Alawi, co-founder of the Mecca-based Islamic Heritage Research Foundation.

“You just find soldiers gathered in one place doing nothing,” he said.

He also alleged that he had been insulted because of his nationality, when security men asked him to “come identify this Egyptian corpse”.

“Why are they humiliating us like this? We are coming as pilgrims asking for nothing,” Hasan said angrily, urging the security forces to “organise the roads” to ensure the smooth movement of people.

Even before Thursday’s stoning tragedy, other pilgrims had complained of a lack of organisation.

Thursday’s tragedy occurred outside the five-storey Jamarat Bridge, which was erected in the last decade at a cost of more than $1 billion and intended to improve safety.

Almost one kilometre (less than a mile) long, the Jamarat Bridge allows 300,000 pilgrims an hour to carry out the ritual, in which they throw pebbles against walls.

Interior ministry spokesman General Mansur al-Turki said the stampede was caused when “a large number of pilgrims were in motion at the same time” at an intersection of two streets in Mina.

“The great heat and fatigue of the pilgrims contributed to the large number of victims,” he said.

And one Saudi minister blamed the pilgrims for the tragedy, saying they had not followed hajj rules.

But in the view of an Egyptian worshipper who identified himself only by his first name Ahmed, “the fault is not on the pilgrims”.

“Saudi Arabia is spending a lot on hajj but there is no organisation,” he said, complaining that the flow of people into and out of the tent camp needed to be better managed.

“They could make one road for those going and another for those returning,” Ahmed said.

“If one policeman would stand at the start of every road and organise the pilgrims, none of this would happen.”

The stoning ritual is supposed to continue on Friday and Saturday, but pilgrims said they were fearful of a repeat of Thursday’s deaths. Some put their faith in God, saying he would protect them.

“Of course we are afraid of tomorrow,” said Hasan, the Egyptian pilgrim. “I want to go do the stoning at night. I asked a cleric, he said it’s OK.”