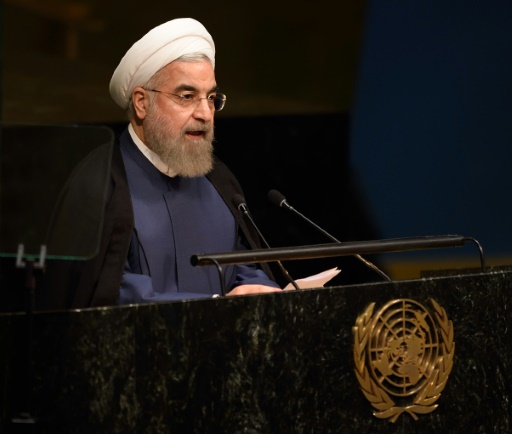 Iranian President Hassan Rouhani on Monday called for a united front to fight extremists in the Middle East and said Tehran was ready to help “bring about democracy” in Syria and Yemen.

Making his first address to the UN General Assembly since the historic nuclear deal was reached, Rouhani waded into the intense diplomatic debate over fighting jihadists and pushing for regime change in Syria.

Rouhani extended an invitation “to the whole world and especially the countries in my region to form a joint comprehensive plan of action to create a united front against extremism and violence.”

The grouping would tackle regional problems through dialogue, prevent the slaughter of innocent civilians, and build democratic governance in the region, he said.

Rouhani spoke after Russian President Vladimir Putin called for a “broad coalition” to stamp out the Islamic State group but stressed that the Damascus regime must take part in the effort.

“The gravest and most important threat to the world today is for terrorist organizations to become terrorist states,” said Rouhani.

An ally of Syria’s President Bashar al-Assad, Iran has repeatedly argued that fighting IS jihadists must be the first priority in addressing the crisis from the four-year war.

Rouhani however did not specifically address Assad’s fate, but he did suggest that elections could restore legitimacy of power.

“We support the consolidation of power through the vote of people rather than with arms,” he said.

Rouhani’s remarks came amid much wrangling over the way to end the four-year war in Syria that has left more than 240,000 dead and sent thousands of refugees fleeing to Europe.

Russia strengthened its hand in shaping Syria’s post-war future when it sent troops and fighter planes to shore up the battle against IS, which now controls large swaths of territory.