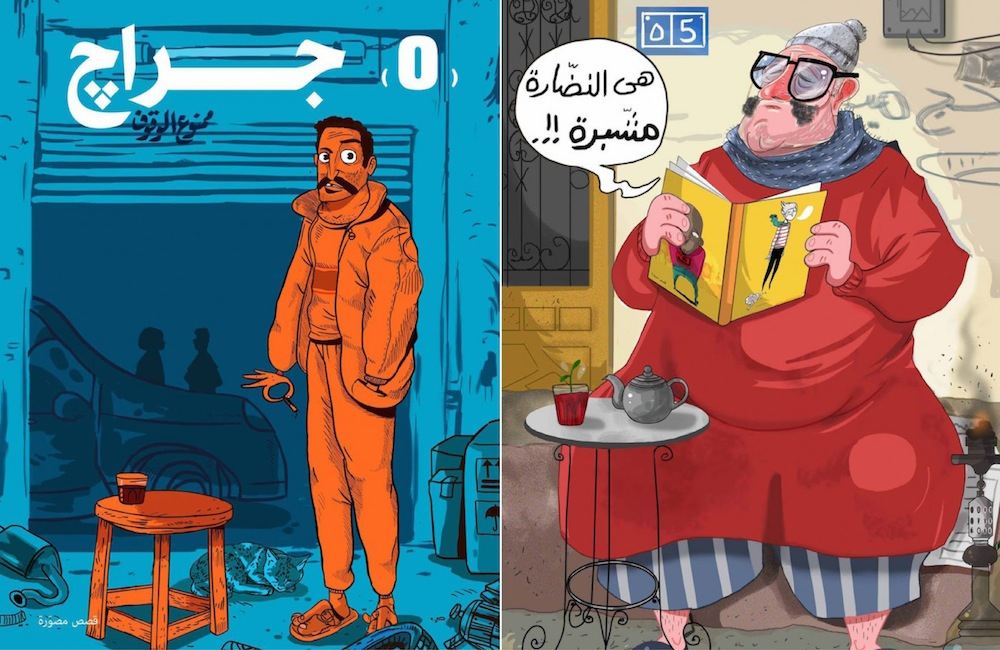 Following in the footsteps of Samandal and Toktok, among others, “Twins Cartoon” — the pen name of cartoonists Mohamed and Haitham Rafaat — has launched Egypt’s newest collective comic book, Garage.

“The name Garage was born out of the project being an underground, independent production, like we are starting from the bottom, then going up and out to the world,” Haitham Raafat told Ahram Online.

The magazine launched late August at Townhouse Gallery in downtown Cairo. There are now several major pop-literary comics in Cairo alone, including Toktok, Garage, and Shakmagia.

According to Design Indaba, the indentical twins behind Garage graduated with twin degrees in fine arts in 2008, since which time they’ve worked both drawing and teaching the art of comics. They founded Kawkab al-Rasameen, or Planet of Artists, in 2014, and that led to Garage.

Haitham told Design Indaba earlier this year: “Before the revolution in 2011 comics in Egypt were a copy of French comics, with only a little of the culture of Egypt. After the revolution comics became popular among teenagers. Artists in Egypt can now express social topics that affect Egyptian people, especially the poor.”

The first issue of Garage, Haitham told Ahram Online, includes 12 projects “from a mix of unknown artists with others who are better established, to balance it out.” The launch issue also features a number of female artists, including Sara Khaled, Doaa El-Adl, and Aliaa Aly.

Although there are contributions from Lebanon, Morocco, Jordan, and Syria, Haitham told AO that they “take care to make other Arabic dialects readable for an Egyptian audience.”

According to Design Indaba, “The teenage crowds are their most popular audience.”

The twins have also helped found the Cairo Comix Festival, set to be held this September 30 – October 2. “Preparing for this festival we felt there are so many great artists who are unknown that we wanted to help showcase,” Haitham told Ahram Online.

The magazine will initially come out tri-monthly, with hopes to move it up to monthly.