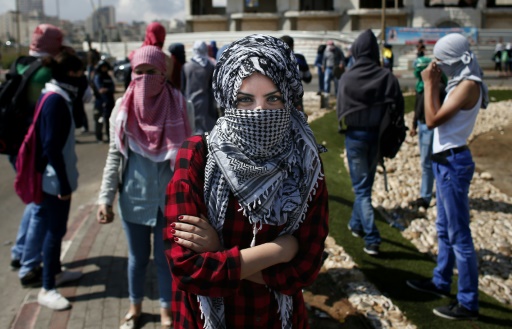 Ready for action in her pink muslin top, her manicured fingers clutching stones she picked up from the roadside, the 18-year-old declared that "the nation doesn't only belong to the boys!"

Young Palestinian women have increasingly joined males to hurl rocks at Israeli soldiers and chant slogans as unrest has spread in recent days in the occupied West Bank.

Some defying disapproving families, wrapped in black-and-white scarves, they have joined the front lines, where they face rubber bullets, tear gas, stun grenades and even live fire.

In other words, the women could die.

“We make up half of society. We also have the right to defend our country,” said the student, kohl-lined eyes visible behind her traditional keffiyeh, during a face-off with the army at a checkpoint outside the city of Ramallah.

But she refused to give her name or have her photo taken.

“If my parents knew I was here…”, said another young woman, long hair escaping from under the keffiyeh, as she drew her thumb rapidly across her throat to mime slaughter.

Her family may not approve, but she believes being here is “a matter of conscience.”

“If everyone’s scared, no one will sacrifice themselves for the nation,” she said.

Like other frustrated young Palestinians, the women say they want to end Israel’s occupation as well as “harassment” by Jewish settlers who live in the West Bank.

Palestinian president Mahmud Abbas has called for resistance and not violence, but many young Palestinians have grown tired of the 80-year-old leader’s pronouncements and of Israel’s right-wing government.

In the runup to his speech at the United Nations headquarters last month, Abbas said he would use the opportunity to drop a “bombshell.”

In the end, all he said was that he was no longer bound by past accords with the Jewish state, accusing the Israeli government of breaking them.

But it remains unclear whether those words will translate into action.

“He promised a bombshell during his last speech but we still haven’t seen anything,” said young woman, whose face was also covered.

The “intifada continues because we stopped listening to the president a long time ago,” said a first-year literature undergraduate.

Abbas has prided himself on obtaining Palestine the status of observer state and saw the Palestinian flag raised at the United Nations for the first time on September 30.

But it’s not enough, these women said.

“It should be up to the people to decide, and I don’t believe in negotiations,” said an 18-year-old accounting student, referring to decades of peace talks.

As she spoke, an Israeli stun grenade whistled in, sending her and her friends running.

They dispersed like a flock of birds, but nearby another group of young women launched into action.

Molotov cocktails and stones in hand, they ran up to the frontline beside the young men to throw them.

Young women are also present at the funerals of Palestinians shot dead by Israeli soldiers.

Keffiyehs on their shoulders, dressed in the red-embroidered national robes or decked out in the latest skinny jeans, they shout: “To Jerusalem, we go, martyrs by the millions.”

Representing all political parties, young women turn up in droves at student union meetings and protests.

At a recent union gathering at Bir Zeit University near Ramallah, there were more women than men — although the men were the ones who shouted breathlessly into the microphone and stood in front, necks draped in the scarves of the different political movements.

Other young women have gone even further.

One of them is battling death after she stabbed a Jewish man in Jerusalem’s Old City Wednesday and he shot her.