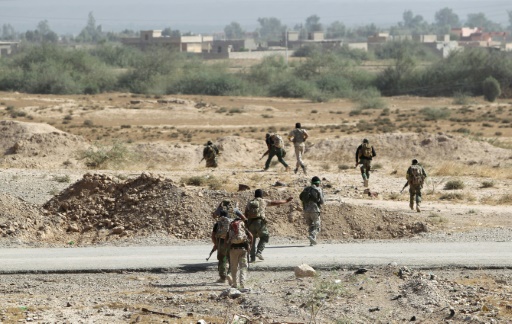 Iraqi forces advanced on three fronts against the Islamic State group Sunday, flushing out pockets of resistance in and around Baiji and closing in on Ramadi and Hawijah, officers said.

The city and nearby refinery — the country’s largest — have been one of the worst flashpoints since IS launched a sweeping offensive across Iraq’s Sunni Arab heartland in June 2014.

Anti-IS forces, including thousands from the Popular Mobilisation (Hashed al-Shaabi) force that includes many Tehran-backed Shiite militias, have reconquered most of Baiji and its surroundings.

“They are still combing some neighbourhoods of Baiji, including Tamim to the west and the market area in the centre,” a police brigadier general said.

“There are still a few IS members in there,” he said.

“The security forces and Hashed forces took up positions to take control of some neighbourhoods in Baiji, searching for bombs and booby-trapped houses,” an army major general said.

He described the latest advance in the Baiji area as “the biggest victory since 10th of June 2014”, when IS made massive territorial gains with a lightning offensive that saw Iraq’s federal forces collapse completely.

Since they launched a counter-attack last year, government and allied forces have retaken all areas south of Baghdad and others north of the capital, including the city of Tikrit.

The government forces pushed past Baiji on the main road leading north to Mosul, cutting off IS fighters holding the city of Hawijah, east of the Tigris river.

Army and police, backed by hundreds of Sunni tribal fighters incorporated into the Hashed al-Shaabi, began an operation Sunday aimed at surrounding Hawijah.

“The operation started in two areas, one west of Kirkuk around Al-Fatha and the other south of Kirkuk near Allas oil field,” a major general said.

The Kurdish peshmerga forces were not directly involved in this operation but they have mande progress of their own in recent weeks, pushing southwest from Kirkuk, which they control.

A security coordination meeting between federal and Kurdish forces and politicians was held in Kirkuk Sunday, governor Najmeddin Karim said.

Iraqi forces also continued to tighten the noose around Ramadi, the capital of the western province of Anbar, which IS captured in May this year.

Iraq’s Counter-Terrorism Service is leading operations around Ramadi, with backing from the security forces, Sunni tribesmen opposed to IS and US-led coalition air strikes.

“Albu Farraj neighbourhood is under full control now. The city of Ramadi is completely isolated from the northern side now,” said Major General Ismail Mahalawi, from Anbar Operations Command.

A coalition spokesman said last week the number of IS fighters still inside Ramadi was estimated at 600 to 1,000.