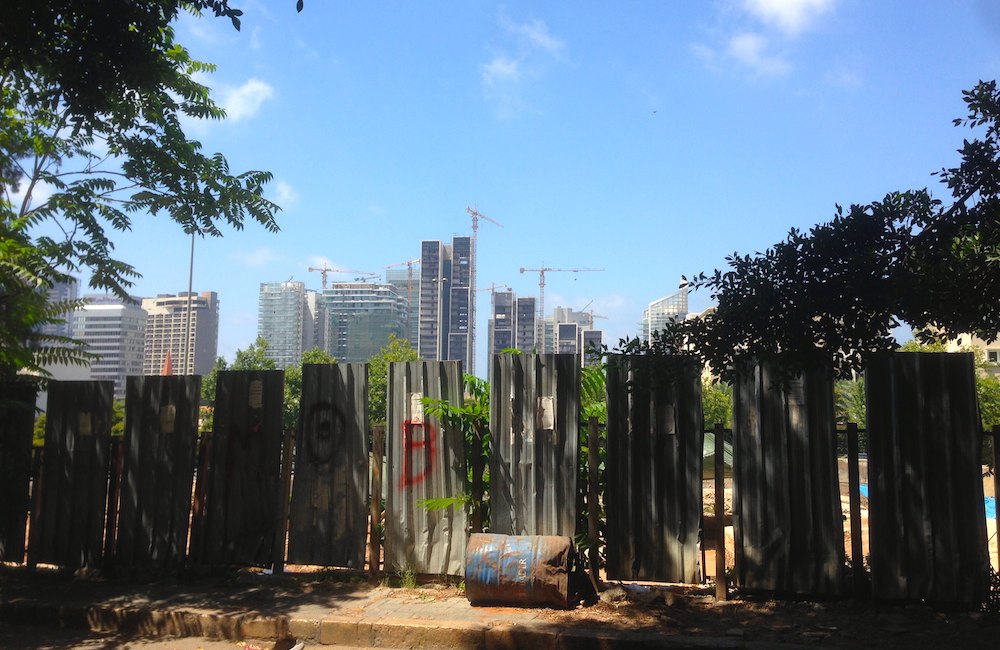 According to the local NGO Save Beirut Heritage, only two hundred historical buildings – among them old Ottoman houses and French colonial architecture – survive in the city, while almost a thousand have been left in ruins or deliberately pulled down since 1990. Militia violence, bombs, airstrikes, and mortar attacks are certainly responsible for much of the devastation. Yet, Beirut’s real cancer was caused by real estate developers, non-existent preservation laws, and a political élite corrupted to the bone.

In the wake of the dramatic transformation experienced in central Beirut since 1990, scholars mainly pointed the finger at Hariri’s coterie and the joint-stock company Solidere. They rightly criticised the ancient souks’ replacement with an exotic city-mall. They reasonably denounced the demolition of almost 80 percent of the buildings damaged by the war; the reshuffling of urban and social fabrics; the complete erasure of public spaces; and the dramatic gentrification of the area.

Old central Beirut is lost and the new one has been invented according to ideals with little resonance in the city’s past. Beirutis perceive it as a privatized land and even restoration – if compared to the huge amount of money invested – was limited, superficial, and arbitrary. However, with the spotlights turned to Solidere and the Central District, the slow death of Beirut’s heritage was also taking place in the surrounding shade.

The relationship between history and urban development in post-war Beirut swing between symbolic memory and complete amnesia. The first was fully enacted in the downtown area; where 19th and 20th century buildings around Place d’Étoile have been restored to house Café Costa, Louis Vuitton, and Gucci, among others. The second afflicts the rest of Beirut.

On the one hand is an island of ‘urban hygiene’; bereft of its historical or cultural identity and detached from the rest. On the other is the ‘concrete jungle’; an expanse of urban chaos where original fabrics and architectures are phagocytized by unscrupulous real estate projects. Where this has not yet happened, the cityscape is abandoned to its fate. In this scenario, except for a few exceptions where restoration was implemented at the owners’ own choice and expense, dilapidated Ottoman and Art Deco houses are opened, gutted, and smashed by disproportionate skyscrapers. This crane forest scattering Beirut’s skyline gives little hope for any future reversal.

After the Ta’if Agreement, officially ending the civil war in October 1989, the country’s physical recovery was pursued through massive privatisations and real estate development, concentrating the bulk of foreign investments in the centre, while profoundly neglecting the more peripheral neighbourhoods. Beirut’s reconstruction remained limited to its downtown, while Horizon 2000 – the master plan launched in 1993 – offered only guidelines for a new urban centre. Within these boundaries, Solidere had almost complete powers.

If such disproportion was partly justified by the tremendous devastation affecting the centre, it was however fully coherent with the will of relaunching central Beirut as a regional paradise of real estate investment. And while a new glittering Central District was quickly taking shape, la rèpublique du béton – as the activist Philippe Skaff addresses it – embedded Lebanon at its edges. For Beirut’s historical heritage, that was the beginning of the end.

Lebanese law is indeed quite vague in matter of conservation and it completely lacks a decree to preserve the country’s historical patrimony. As a result, preservation is either implemented ad hoc – look for instance at central Beirut – or deliberately sidestepped, as for the hundreds of historical buildings demolished in the surrounding areas. Such legal vacuum became clearer in the early 1990s, when the Ministry of Culture appointed a non-governmental organisation, APSAD (Association for Protecting Natural Sites and Old Buildings in Lebanon), to draw up a list of the relevant buildings to be preserved. APSAD listed almost 1,200 sites, but the figure was soon reduced by more than half, facing the owners’ staunch opposition. Nothing has changed since.

As observed by Sami Feghali, Head of Department at the Council for Development and the Reconstruction (CDR), “as long as the country lacks a decree for preservation, people will not be interested in restoring traditional houses; since they get no legal or economic advantages from it”. To complicate the issue is the inheritance tax, often leaving the owners without money to recover their houses, and the possibility of advantageous sales to bigger construction companies – sales that were made possible by the 1990 and 2004 real estate booms, but to which protected houses currently represent a considerable restriction.

In other words, coherently with the project of re-launching the Lebanese economy through real estate development and foreign private investment, economic value in the country lies in the plot of land, not in the architectural artefact on it. This, summed to the property market’s skewed figures, makes protected buildings more a hindrance to juicy profits than a patrimony worth of preservation.

Moreover, as explained by Lady Cochrane, President and Founder of APSAD, in an interview in 2010, the issuing of a preservation law is continuously hindered by a dominant élite that nurtures huge economic interests in real estate companies; on which politicians indirectly invest, while perpetuating the legal conditions for exploiting the urban space. The Construction Law 646/2004 is pretty explanatory in this regard. Drafted with direct participation and approval of real estate companies, it roughly doubled the Tax Exploitation Ratio and allowed the purchase of eventual ‘spare cubic metres’ from adjacent plots. In other words, while laws regulating construction are continuously modified for enhancing investments and profits, preservation is constantly debated, contested, and revisited outside a regular legal framework.

In this light, the recent insertion of Heneine Palace in the World Monuments Fund’s watch-list is obviously good news for Beirut and an extraordinary achievement for civil society organisations. The building, originally part of Zokak el-Blat’s garden district, dates back to the Ottoman age and is indeed unique for its proportions and richness. However, although this constitutes a small important step towards protection, it equally sheds light on the political vacuum surrounding this issue.

Uneven liberalism and ‘real estate fever’ have been inherently responsible for the defacement of Lebanese territory: from the relentless privatization of its coastline to the savage destruction of its architectural heritage. Moreover, in a country where sectarian belonging and political clientelism partition the territory into a myriad of personal fiefdoms, territorial planning inevitably depends on local notables’ goals and their ability to enforce them. When it comes to conservation, what Lebanon urgently needs is a single policy framework to formulate a trustable political answer; one that settles a ceiling to high-rise buildings, rather than condoning luxury attics; one that facilitates preservation, rather than the neglect of it; and one guaranteeing greater state-print in planning, rather than outsourcing its duties to private actors.

Until this occurs, public strips of sand will be seen as private marinas, rare green areas as elitist golf clubs, and every historical architecture as a wannabe Tower of Babel.