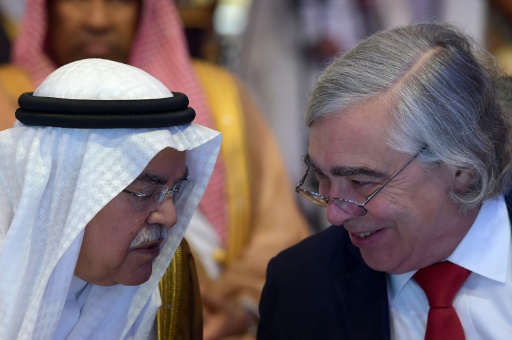 In an action plan filed with the UN three weeks before a crucial climate conference in Paris, the world’s biggest crude oil exporter said up to 130 million tonnes of carbon dioxide equivalent (CO2e) per year would be “avoided” by 2030.

It was not clear whether this meant a cut from existing or projected pollution levels.

Saudi Arabia is the fourth member of the Organisation of Petroleum Exporting Countries (OPEC) after Ecuador, Algeria and the United Arab Emirates to submit a carbon-curbing pledge.

It became the 157th country to submit its national pledge, dubbed Intended Nationally Determined Contributions or INDE. These will form the backbone of a 195-nation pact, due to be inked in Paris, to limit global warming.

Saudi Arabia made its target conditional on diversification of its fossil fuel-reliant economy. Petroleum revenue makes up roughly 90 percent of government income.

“These ambitions are contingent on the kingdom’s economy continuing to grow with an increasingly diversified economy and a robust contribution from oil exports,” the pledge said.

Saudi Arabia said its goal could be achieved by investing export income on growing other sectors like finance, medical services, tourism and education — also renewable energy and energy efficiency technologies.

Some countries in the UN climate negotiating forum view Riyadh as an obstacle in the pursuit of a universal carbon-curbing pact, by virtue of its heavy reliance on oil sales.

Bill Hare, chief executive of the Climate Analytics thinktank, said this was the “first significant concession by Saudi Arabia to the international climate process.”

“The Saudis may be sending a very first tentative signal that they’re preparing for a post-oil economy… They have massive potential in renewables and would need to really unleash this,” he told AFP.

But the pledge was an inadequate contribution to the global effort to climate change.

“As a wealthy country which would be hard hit by the impacts of global warming, Saudi Arabia could go much further, for example in the development of solar energy,” said analyst Celia Gautier of Climate Action Network, a group of environment NGOs.

The overall goal of the Paris pact is to limit global warming to a relatively safe two degrees Celsius (3.6 degrees Fahrenheit) over pre-Industrial Revolution levels.

Scientists say the national pledges submitted so far, placed Earth on track for warming closer to 3 C, or more.