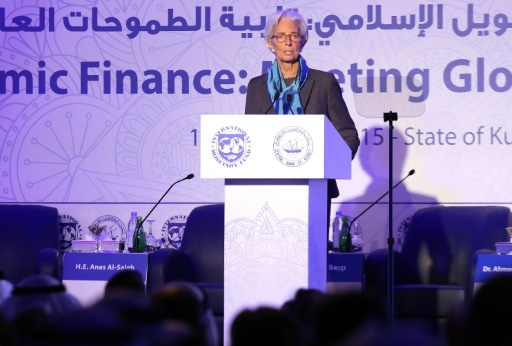 “Islamic finance has, in principle, the potential to promote financial stability because its risk-sharing feature reduces leverage and its financing is asset-backed and thus fully collateralized,” Lagarde told an Islamic finance conference in Kuwait.

Islamic banks also offer profit-sharing and loss-bearing accounts that can help mitigate losses and contagion in the event of banking sector distress, she said.

“This leads… to higher total loss-absorbing capital, one of the key objectives of the new global regulatory reform,” Lagarde told the one-day event organised by the IMF and Central Bank of Kuwait.

But she said that for the industry to unlock its full potential, it must expand its customer base, harmonise standards and improve regulatory frameworks.

Lagarde later told a press conference the IMF will increase its involvement in the Islamic finance industry by providing more bilateral surveillance and analytical help.

Lagarde said Islamic assets have crossed the $2 trillion mark and has the potential to grow much larger.

Around 40 million of the world’s 1.6 billion Muslims are clients of the Islamic finance industry, which has surged in popularity since its niche market days of the early 1970s.

“A system, which if implemented in its true spirit, will bolster growth, create jobs, reduce poverty and address inequality,” Hashel said.

He said the Islamic system channels credit into productive investments that are socially responsible and not in wasteful speculative activity.

The objective is to create a system that is “ethically right, socially just, financially stable and economically productive”, Hashel said.

Officials and experts, however, acknowledged that the industry still faces tough hurdles, mainly setting consistent regulations for all markets.

The Jeddah-based Islamic Development Bank president, Ahmad Mohamed Ali, said he believes the main obstacle is the failure to create a mega Islamic bank and the lack of sufficient tools to manage liquidity effectively.