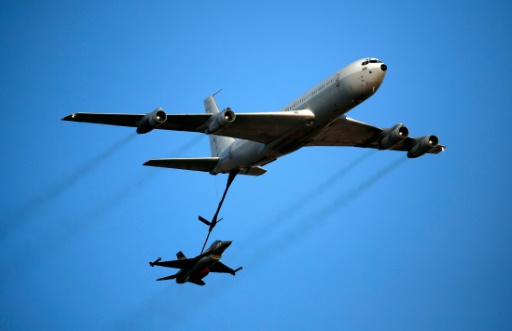 Syrian rebels backed by Turkey and the United States have seized two villages from Islamic State (IS) jihadists close to the Turkish border after fierce fighting, Turkish official media said on Sunday.

The state-run Anatolia news agency said that ethnic Turkmen fighters had captured the villages of Harjaleh and Dalha in northern Aleppo province from IS forces.

The ground offensive by the Turkmen fighters, strong allies of Turkey in its push to oust President Bashar al-Assad, was backed from the air by US and Turkish fighter jets, it added.

Six Turkish F-16s, four US F-15s, an American AC-130 and three drones were involved, the report said, without specifying if any targets were hit.

Some 70 IS jihadists were killed in the fighting, it added.

The Britain-based Syrian Observatory for Human Rights confirmed that the villages had been captured from IS but said the campaign had been waged by rebel and Islamist factions and not just Turkmen fighters.

Turkish officials have in the last days said a major joint air operation against IS with the United States was planned, with Turkmen forces fighting on the ground.

They said the aim is to clear of jihadists a 98 kilometre (61 mile) stretch of Syria’s northern border with Turkey still controlled by IS.

The special US envoy for the anti-IS coalition, Brett McGurk, had on Friday also indicated that the operation was imminent.

“Now we’re going to start pushing them (IS) back,” he said in Washington.

Turkish media reports described the operation as the first step in Ankara’s plan for creating a so-called safe zone in northern Syria that could eventually house some of the 2.2 million Syrian refugees hosted by Turkey.

But American officials have expressed scepticism over the idea, with President Barack Obama saying at the G20 summit in Turkey on Monday that a true safe zone needed ground operations.

“How would it work? Would it become a magnet for further terrorist attacks? And how many personnel would be required, and how would it end? There’s a whole set of questions that have to be answered there,” he said.