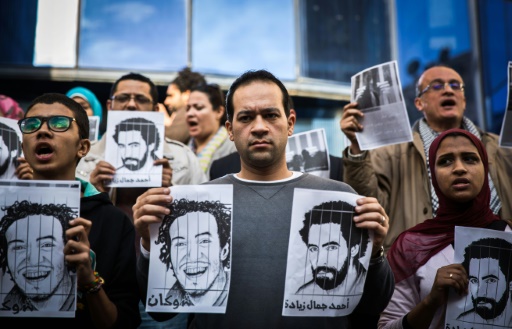 Egyptian authorities arrested a prominent journalist and expert on jihadist movements in Sinai, Ismail Alexandrani, as he arrived in the country from Berlin, his wife said Tuesday.

Thousands of activists, as well as several journalists, have been detained since former army chief and now President Abdel Fattah al-Sisi overthrew his Islamist predecessor Mohamed Morsi in 2013.

Alexandrani, 32, was arrested on Sunday at the Red Sea resort of Hurghada where he arrived from Berlin, his wife Khadija Gaafar told AFP.

“They then took him for interrogation to Cairo,” Gaafar said.

“I don’t know what accusations have been made against him. I didn’t meet him, nor have I spoken to him since his arrest. His lawyers are with him.”

A security official confirmed Alexandrani’s arrest but refused to comment on potential charges.

An expert on jihadist movements in North Sinai, where security forces are fighting a swelling insurgency led by the Islamic State group, Alexandrani had been to Germany to deliver lectures on the political situation in Egypt, Gaafar said.

Alexandrani is also known for his anti-regime writings and for criticising the military’s role in politics.

He is the second journalist to be detained in recent weeks after the military held prominent rights defender and reporter Hossam Bahgat for a day last month.

Human rights groups accuse Sisi of installing a repressive regime that has arrested thousands of activists, mostly Islamists, but also leftists and journalists.

Three reporters with Al-Jazeera were detained in 2013 and later convicted of fabricating “false” news in support of the banned Muslim Brotherhood.

Their trial sparked international criticism led by the White House and the United Nations.

One of the Al-Jazeera journalists, Australian Peter Greste, was deported and the other two, Canadian Mohamed Fahmy and Egyptian Baher Mohamed, were eventually pardoned and released.