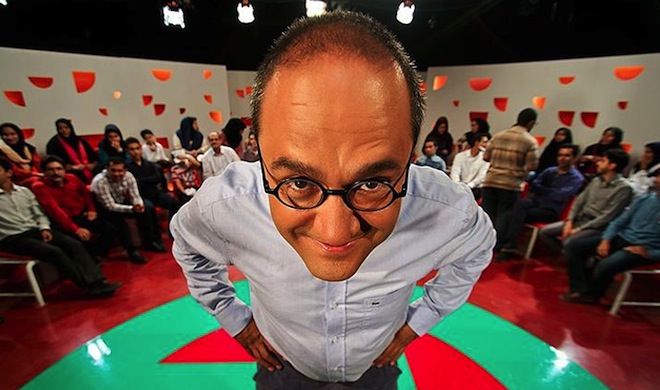 In the absence of attractive and entertaining programs on Iranian TV, comedy show 'Khandevaneh' is gaining momentum and drawing public attention. Especially among the young.

Iran’s state TV, despite its diversity – as many as 20 national TV channels are being operated by the ultimate radio and television authority in Iran, IRIB – is usually devoid of fun and entertainment. The TV series, produced with extensive, direct funding of IRIB (Islamic Republic of Iran Broadcasting), customarily follow gloomy themes and are based on lackluster, dreary and repetitive plots. Police operations, court hearings, divorce, family conflicts, bankruptcy, separation and death are the recurrent themes. There are always scenes of people taking part in funerals, mourning their dead at the cemeteries, crying and shedding tears; otherwise, you should look for people brawling, beating and yelling at each other or couples fighting on trivial matters. Disappointment is being heavily inculcated through these dramas as a norm and it seems as if the producers and directors working with IRIB do not get along with more blissful or peaceful plots. Even though Iran’s cultural authorities usually complain of rampant violence on the American movies, they’re seemingly going beyond the pale on another extreme: making the people feel they always need to be dejected and demoralized.

Music is a rarity on Iranian TV channels. The musical compositions of popular singers and musicians are aired only on certain occasions, and there are no routine programs dedicated to music. When the hardliner Mahmoud Ahmadinejad became president, he banned Western music from radio and TV stations with a ruling through the Supreme Council of Cultural Revolution in December 2005. This meant that Yanni, Ennio Morricone, Eric Clapton and the Eagles would be cast out of the Iranian radio and TV programs, even though their works were widely popular across the country. And satirical shows, comic movies and other forms of entertaining programs are broadcast once in a blue moon.

However, it’s not simply entertainment that is missing in IRIB programs. The political shows are deeply biased in favor of a small group of conservatives, including the former President Mahmoud Ahmadinejad and his entourage, such as Saeed Jalili, who won 11% of the popular vote in the 2013 presidential elections. Ahmadinejad is now an ordinary citizen, but there are signs that he still casts a shadow over the IRIB programs and can pull the strings. Talk shows, news programs and political debates are stunningly prejudiced against President Rouhani, his cabinet, and more than 18 million Iranians who voted for him two years ago; people who hoped that he could initiate a new path of reconciliation with the international community and draw the nuclear controversy to a conclusion.

During the course of the past two years, and as Iran and the six world powers (Britain, China, France, Germany, Russia and the United States) started their day-and-night endeavors to seek a negotiated solution for Iran’s nuclear standoff, IRIB set in a motion an all-out effort to derail the talks through an agitprop campaign, instilling the view that negotiations with the United States were futile and frivolous, and even implying that the Iranian negotiators, especially Foreign Minister Javad Zarif, were traitors, because they engaged in direct talks with Iran’s (alleged) greatest enemy.

The news stories broadcast by the IRIB have extreme ideological leanings, and it sometimes sounds like IRIB does not feel comfortable with its people being happy and proud. For example, Asghar Farhadi, who is the only Iranian filmmaker to have won an Academy Award, was nearly boycotted by IRIB when it was announced in 2012 that an Academy Award for Best Foreign Language Film was granted to him. The reason? Still not clear to me.

So, while IRIB doesn’t pander to the appetite and interests of its audience, involuntarily pushing millions of young, news- and entertainment-thirsty Iranians to turn to satellite dishes and watch BBC Persian and Manoto – which sometimes run fierce anti-Iranian programs – there are some exceptions to the rule that IRIB is becoming a gigantic and massive media organization which produces negligible output while getting millions of dollars every year from government sources and raising enormous funds through its startling commercials, which occupy a great part of the daily programming.

“Khandevaneh” is the name of a satire and interview show being aired on Nasim TV. It started broadcasting on June 11, 2014, and since then, has been one of the most popular telecasts among the entire IRIB channels. The program’s name rhymes with the word “Hendevaneh”, or watermelon in Persian, and its first segment, “Khande” means laughter.

The objective of the program, directed and hosted by Rambod Javan – a prominent Iranian comedian and actor – is to promote happiness and the “culture of laughing” in a depressed Iranian society.

Every night, 100 attendees participate in the show as spectators. It’s open to everybody, provided that they pass certain tests on laughing skills. People send text messages to the program, and are selected randomly to take part.

The show starts with Rambod Javan appearing on a rolling stage, extending greetings to the guests and the viewers. The guests repeat the statements he makes in the introduction synchronously: “In the name of God, my name is Rambod Javan, from the Nasim TV. This is Khandevaneh!”

After the introduction, the host asks the 100 attendees to hold their breath for 10 seconds and then burst into laughter for 25 seconds. He walks around the studio, laughs along with the participants, seated neatly on benches at the three sides of the studio, and encourages them to laugh out louder. Once the laughing session is over, Rambod pronounces the words “we are so cool”, and the participants follow him by shouting “so much!” together. All the participants receive trainings on what to chant after every specific statement Rambod Javan makes. He regularly invites the attendees to give a round of applause to themselves, the viewers, the program staff, and of course the special guest who is invited and interviewed every night.

Khandevaneh also features stand-up comedians. There are two actors who play different humorous roles each session and sometimes wittily imitate foreign languages and sing songs, which actually appear to be genuinely Russian, Japanese or Italian. One of them, Nima Shabannejad, is followed by some 171,000 Iranian users on Instagram. He acts as a devil’s advocate and engages in lengthy debates with Rambod Javan, making arguments against whatever he says on different issues for the sake of entertaining the audience. Nima and his mate, Danial Ghaffarzadeh, also gently mock famous public figures and make parodies which appeal to the Iranian sense of humor. The show also premiers a popular puppet comedian, called “Jenab Khan.” Jenab Khan is originally from southern Iran, speaks Persian with a very amusing accent and performs happy, rhythmic songs with a typical southern Iranian tone, and dances hilariously. Such songs are usually played in the wedding ceremonies.

Video reports from Iranian cities and conversations with people of diverse backgrounds about their daily activities, habits, interests, jobs, culture and traditions are also interspersed within the different parts of the show.

The special guests invited to Khandevaneh include celebrities, university professors, public servants and government officials. Masoumeh Ebtekar, the head of Iran’s Department of Environment and one of the vice-presidents of Iran appeared on the show last year. Rambod Javan has extended an invitation to Foreign Minister Javad Zarif, saying that he should be lauded for his efforts to clinch the nuclear deal with the six world powers, and the telecast wishes to eulogize him for his sincere efforts in concluding the talks. The reform-minded Rambod was perhaps violating the codes of conduct of his bosses at the top echelons of IRIB, who insist on downplaying the importance of this diplomatic breakthrough, and even refuse to use the term “nuclear agreement”, and instead talk of “the conclusion of the talks.”

At the end of each interview session, guests are asked to stare directly into the main camera lens and smile for 10-20 seconds. The audience at home is asked to score the best, most beautiful smile from among the six guests of the week by sending their views to the text messaging system of the show. The guest who receives the highest votes will be awarded the trophy of the best smile of the week.

Khandevaneh has also embarked on a number of humanitarian and environmental efforts. It has launched a “Drop by Drop” campaign with the backing of its financial sponsor, asking viewers to pledge that they decrease their daily consumption of water by at least one drop. Encouraged by Rambod Javan’s plans, thousands of Iranians have already joined the campaign.

It seems that in the absence of challenging social and political shows on Iran’s TV, Khandevaneh can sometimes bear the burden of serious shows and raise issues which touch nerves and draw attention to causes that are not necessarily satirical or fun. Earlier this year, the mayor of the northern city of Rasht ordered that 37 trees stretching along a 2-kilometer avenue at the heart of the city be uprooted so that a new lane could be constructed for express buses. Some of the trees were said to be as old as 75 years. The local authorities believed that they could get away with the controversial decision – they pulled the trees out of the ground with bulldozers overnight. However, they were derided nationally when Khandevaneh screened candid photos and footage of the cut trees and the irretrievable damage sustained by the city’s natural landscape.

The show occasionally invites participants with intellectual disabilities and young people suffering from Down syndrome. Rambod Javan often asks his guests to publicly promise that they will do something which will make a group of people happy. This request has resulted in several humanitarian and philanthropic initiatives taken up by the guests. The Khandevaneh crew always films how the guests deliver their promises in public.

As the Iranian TV is replete with lectures, sermons and programs which propagate sadness and dejection and advocate the interests of a conservative, hardliner minority within the nation’s broad political spectrum, the rise of a program that has tried to keep its ideological connotations at minimum and simply makes people happy because they need things other than political and ideological indoctrination is a blessing. Video excerpts of Khandevaneh and the spectacular parts of it are now being frequently downloaded over the Internet and video-sharing platforms.