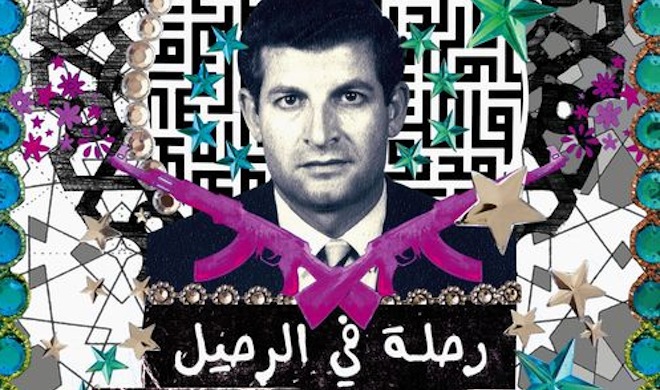 Zane Razzaq chats with Hind Shoufani, the filmmaker behind a new art-house documentary about her own father: "I am a very Westernized Arab and I am a very Arab Westerner, so I'm a combination of both. I wanted to bring all these influences into a Palestinian film."

Palestinian director Hind Shoufani introduced her father to Boston with the screening of Trip Along Exodus at the Boston Palestine Film Festival. The film examines the Palestinian struggle against occupation through the life Dr. Elias Shoufani, a Palestinian who abandoned an illustrious academic career in the United States to become a leader of the underground Palestine Liberation Organization in Beirut in the early 1970s.

Shoufani says she was always told that her father was a “writer, should anyone ask.” The film represents her attempt at truly understanding her father, through filmed interviews, archival footage, and family photos, stylized in an art-house film style.

I recently chatted with Hind Shoufani about her film, the experience of being a Palestinian filmmaker, and what comes next.

Q: Your film Trip Along Exodus recently screened at the 9th Boston Palestine Film Festival. After the film, you thanked the festival for being “brave” enough to show your film. Can you talk more about what you meant by that?

A: I would say the Boston Palestine Film Festival is one of the first few American film festivals to show the film. I found that there was a lot of interest in in the film in Europe and the Arab world. But, it’s been difficult to show it in the U.S. Because primarily, I think the politics of the film don’t quite reach an audience here. It’s a niche film in the sense that people have to have a certain background to understand the film.

The film is also blatantly anti-Zionist. I think that the Zionist lobby probably has power over various film festivals. They may not want such an overtly Palestinian film.

So, I thought the Boston Palestine Film Festival was quite brave to take it. So for a Palestinian entity to be screening a film that is so critical is quite a bold step. A very good step, I thought.

Q: Have you faced any difficulties being a Palestinian female filmmaker in today’s political atmosphere?

A: I was never raised to believe that anything I might fail at would come down to my gender or my nationality. I was raised to believe I could do anything I wanted to do as long as I did it well, regardless of the fact that I’m Palestinian or a woman. I don’t really ascribe any challenges to being a Palestinian female. If anything, I think it makes me more interesting. I feel like the people who have the interest in my homeland would look very favorably upon having a female Palestinian in their festival or on their invite list or on their panels or in their discussions.

Obviously if I were to think about it objectively, there are many places in the world where a Palestinian, regardless of whether it is a woman or a man, would have no ability to enter. Money that I would not have any access to, because they are not interested in spending any money on my side of the story. The only side of the story that they would want to support would be the American or Israeli perspective.

But I don’t know if I personally have suffered from that. I can’t think of a particular example where being a woman or being Palestinian has worked against me. I just don’t see things that way. I have had a tremendous amount of rejection from festivals when it comes to this film, and I know that it could be a number of reasons. But I tend to think the reasons are either, they don’t really dig the film or it’s two hours long, which is too long for a documentary. Or it’s just not their cup of tea.

Q: You do not appear too much in the film. Was that a deliberate choice?

A: I did set out to not be in the film too much. I have seen various films where the director is in every scene. I found that to be a negative thing, I didn’t really want to be involved in every scene. But, you see me a couple of times. You see me in photos and videos growing up.

Q: In the film, your father seems to reject the romanticization of the Palestinian struggle. Was he frustrated with the tendency of some Palestinians to romanticize the struggle?

A: He did not romanticize the struggle at all. My father is not a type of person to romanticize anything to be honest. Particularly not a political movement. This is probably one of the reasons he had so many difficulties with various people in the movement. He was not involved with the music, the poetry, the painting, the cultural aspect of the Palestinian resistance. He was about politics, setting strategic and military goals. He was an educator, he was an academic, he was a historian. So he dealt with facts and figures, theory and science. He was not someone interested in cultural memory or any kind of romanticization or nostalgia. He doesn’t have a nostalgic personality.

Because he loved Lebanon so much and the people of Syria so much, he saw the oppression of the Arab people was an element that was there all throughout the Arab world. It was to him a joined effort. He never saw Palestine as the problem of the Palestinians. It set him apart from the leadership of the time who wanted everyone else to stop and they wanted to take over the peace process and then they had Oslo and of course they couldn’t handle the situation. You know, this tiny group of people in Ramallah is not going to liberate Palestine, as evidenced by today’s situation.

So, my father saw the liberation of Palestine as a responsibility for all the Arab people combined. Because, Israel is an entity that effects all the Arabs in the region, not just the Palestinians.

Q: You’ve said in other interviews that you set out to make a personal, not a political, documentary. There are certain touches throughout the film, like your spoken word poetry, that help making the film feel personal. Why was this distinction between personal and political important for you?

A: The political is very personal in my family and the personal is political. They are definitely interchangeable. The political aspects of the region have affected where my mother lived and died, where my father lived and died, how often I go and see my uncles and aunts and cousins, why I grew up with no family in Syria. That is extremely common in Palestinian refugee families.

I did not want to set out to make a political documentary, because I don’t think I’m really equipped to do that. I don’t think I’m the right person to go out and start challenging political events and questioning decisions about a movement or chasing down journalists or politicians.

It’s not my thing. I’m more interested in stuff to do with memory, family, loss, love, relationships, longing for a homeland, people’s lifestyles, people’s decisions. I’m interested in the human cultural sensory elements of things.

I also wanted to make it unique. How can you make a story that’s been told over and over about a man in exile be unique, if you don’t stylize it as only you can stylize it?

Q: Why did you feel film was the best way to tell your father’s story?

I thought that it would be easier to send his story to people in the form of a film than it is for lots of people to read hardcore serious academic books about him. In that sense, it would reach a wider audience.

I also thought he was charming and an interesting character and would come across well in a film.

Q: Was interviewing your father difficult?

A: No, it was very organic to interview my father, I just let things play out as they normally would play out in a conversation and just try to push as much as I could to get the right information.

It was a bit challenging in the sense that I didn’t have any money or sound gear and I was working on my own. So, I was doing sound and video and doing the interviewing and running around filming and trying to do all these different things at the same time.

I’m not a trained cinematographer, I’m a trained director and writer, so for me, filming stuff, shooting stuff, personally, was a bit of a challenge. And I think the film has technically suffered a bit because it was me who was filming most of the stuff with my dad. But, under the circumstances, I don’t think anyone else being in the house would have been a good idea. I like that it was just him and I and my sister occasionally.

Q: Can you describe your next project?

A: I run a poetry group called the Poeticians, between Beirut and Dubai, and I have done so for the past eight years. And, in a similar style to this film, I am going to make an experimental art house documentary about love, religion, politics, sensuality, and the poetry and work of seven female Arab poets, including myself.

So, that’s my next project. I’m interviewing and following them around, trying to get them on tape, trying to figure out what kind of story I can tell through the poetry and the performances and the interviews and the lives of these seven women who are very good friends of mine. And who are incredible Arab poets.

I’m very excited about this. I think there’s a lot to be said about filming the lives of very free Arab women. We never really see strong Arab women, free, liberal, interesting women on film. It’s always another kind of women who gets the spotlight. I want to focus on very strong, independent, feminist women who are bilingual and trilingual and make a film about them.

They represent me, in that sense. I’ve never really seen myself represented in Arab cinema. We come from a minority of Arabs who are obviously Westernized but that doesn’t mean we don’t represent our communities or that we weren’t raised in Lebanon or raised in Palestine or raised in Syria, as I was. We still have to represent our communities in some way. And say that we also exist. It’s not just crazy fundamentalists or oppressed women. There are women who are born free and continue to be free. And this is what they have to say.