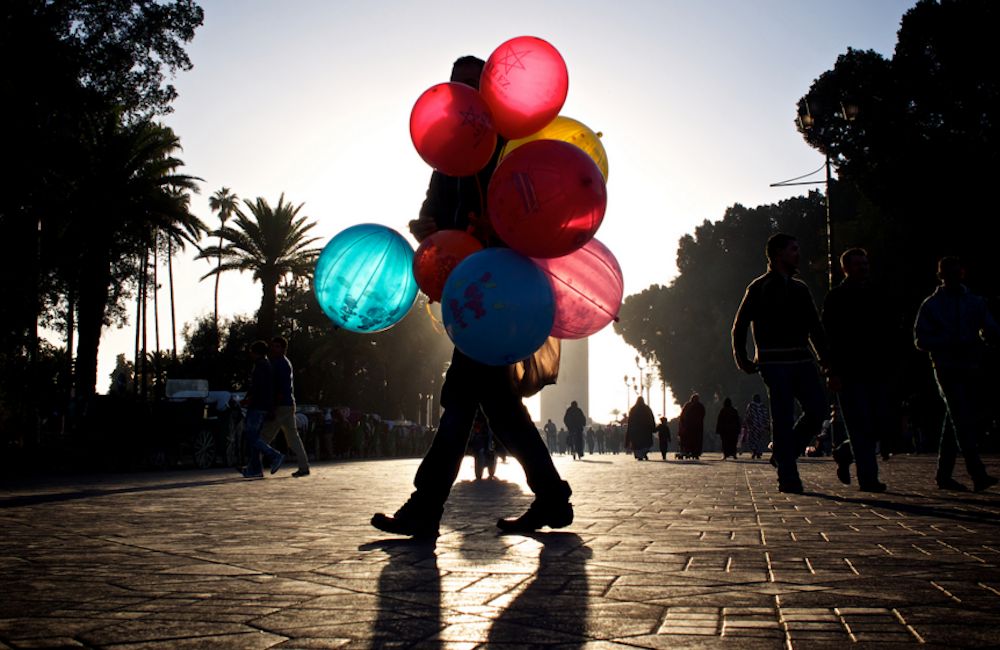 "While the political change is happening slowly, the cultural revolution is bulldozing its way ahead," Professor Mohamed Chtatou writes.

The digital revolution has brought to the Arab world the dream of democracy and personal freedom and is fundamentally changing the Arab mind, in spite of the strong tug of tradition and religion, which has always, in many ways, prevented progress towards societal change and cultural revival.

However, as this revolution is wrecking havoc in Arab societies, creating new realities and new narratives, many observers of this part of the world are duly asking the question: how will the Islamic religion react to this challenging situation? Adapt to it, or reject it?

THE SILENT REVOLUTION IN FULL SWING

The millennials are those children born at the turn of the millennium (a period of time extending from 1990 to 2005.) They came to life at the height of the digital revolution, spreading the ideals of globalization and freedom. The Internet is their arena for political activism and social interaction. Their ideals center round: democracy, freedom, respect for human rights, preservation of the environment, and the bashing of devious political and cultural practices and dogmatic religious beliefs.

In America, the millennials have recently stood by the Palestinians against Israeli onslaught on Gaza, a move which is unheard of in the annals of American politics. In the Arab World, the millennials successfully bashed dictatorships during the Arab Spring and are busy changing how politics is conducted. The millennials’ spring of democracy may be momentarily faltering, but it is not dying, it is just picking up steam for future rounds, more fruitful, hopefully.

In Morocco, the millennials are busy attacking the foundations of traditional culture and pushing further the frontiers of freedom. They all have new tools for expressing themselves openly: PCs, phablets, smartphones, and tablets. They can get Wi-Fi free connection in most cafés, restaurants, and public places, and even one city, El Jadida, is offering free internet services within the municipality limits (Anyway, most of the smartphones nowadays have 4G technology.)

The state media has always been in the service of the political and religious establishments, glorifying obsequiously the conservative and absolute monarchy and chanting the praise of a traditional and austere Islam that refuses to adapt to the realities of modern times. Sick of the fact that this media hardly ever treats subjects that are close to their hearts, the youth, representing almost 50% of the population in Morocco, created their own exclusive world on the Internet bashing the red lines of both politics and religion, forever.

This unprecedented silent revolution is taking place in Morocco and many Arab countries at the same time. It is true that the West and the rest of the world have been charmed by this unprecedented Arab awakening nicknamed « The Arab Spring », writing thousands of books and articles about it and making documentaries about its various manifestations, but nobody is paying any attention, whatsoever, to the quiet cultural revolution taking place behind the spotlight. The difference between the two phenomena being, that while the Arab Spring has been hijacked by the more absolutist Islamists pushing back societies to the Middle Ages, the cultural revolution is thriving just because nobody is paying much attention to it, at least for the time being.

Monarchy: In the 2011 constitution, as in the previous ones, it is stated clearly that the person of the king is respected, i.e. above any form of criticism. As such all political parties from left or right adhere to this law, and instead criticize and vilify the government. On the Internet the youth argue that the monarch is going back on his indirect promise of incremental democracy and incremental devolution of power. But in spite of all this criticism, they still adhere to the monarchy as a symbol of arbitration and stability due to its historical and religious legitimacy, which has remained unscathed.

Political establishment: The youth criticize openly the self-perpetuating political parties, who never defend the interests of the electorate, but instead are subservient to the monarchy to further their interests by partaking unabashedly in the massive plunder of national wealth. So, for the youth, whether they are from the left or from the right, parties are all co-opted by the regime and indulge in corruption, nepotism, embezzlement, and abuse of power. Thus in this view, the political elite is patriarchal and tribal, in essence, though they preach modernity and democracy in their political discourse.

Political traditions: The youth openly reject the traditional form of the monarchy and government, known as Makhzen, which is obsolete in format, and archaic in essence. As such, they reject the bay3a, which is the traditional expression of allegiance that takes place on the second day of the Throne Day in July, whereby thousands of state employees and elites and local and national representatives, dressed in white djellabas (Moroccan traditional robes), bow to the king on his horse, an action which almost goes back 13 centuries, when the monarchy was first set up in Morocco. This act may be seen as a perpetuation of tradition but these traditions, in the eyes of the youth, also entrench the concept of subject, an individual who has only obligations, instead of that of citizen who has equally obligations and rights.

The youth are calling for a revamping of the monarchy, indeed the « Mouvement du 20 Février » that came in the heels of the Arab uprisings called for the establishment of constitutional monarchy instead of the present executive monarchy. They also see the bickering that is taking place between the king Mohammed VI and his cousin Moulay Hicham, nicknamed by the press « Red Prince » as a mere internal dispute.

Patriarchal and tribal obedience bashing: The Moroccan youth have always been silenced by the patriarchal and tribal concept of respect of seniority. In presence of the seniors, the youth are taught to keep silent and listen to the elders who have more experience. So, actually the youth never get a chance to express their opinions or become part of a political elite. Indeed, the whole political and social arena is off limits to them, while the elder dinosaurs dominate every walk of life to the extent that the political arena looks like it is a true Jurassic Park and that is, undoubtedly, one of the reasons of the advent of the Arab Spring.

In the West, the youth are encouraged to form political elites, in Morocco and the Arab world, they are stifled and repressed and any rebellion on their part is considered as a rejection of tradition.

Female freedom: Since the adoption of a new family code in Morocco known as Moudawana on 2004, the Moroccan women are enjoying more freedom than in the past. Indeed, they can get married without the permission of a family guardian, refuse polygamy for their husbands, and enjoy a better deal in inheritance. This new family code has empowered the women and helped them break the chains of traditional slavery, in spite of the resistance of the Islamists by imposing Hijab and a certain dress code.

Sexual revolution: Men and women are joining forces to fight sexual religious taboos by openly dating with partners inside and outside the country, ending up either in marriage with non-Muslims or illicit haram relationships. Islamic religion allows men to marry non-Muslims freely but disallows females unless the would-be partner converts to Islam. Nowadays, women are not sticking to this religious constraint.

Sex workers: Many Moroccan women are exhibiting their naked bodies on the net to find work in the Gulf States as sex workers, something which has always been outlawed by religion. What is worse, many fathers and families are encouraging their female offspring to migrate to the Gulf countries to make money as prostitutes. In many ways this has become an accepted practice within the society. In addition hundreds of Gulf youth and adults come to Morocco for sexual tourism in cities as Rabat, Casablanca, Marrakesh, and Agadir.

Gay practice: Gay culture has existed in Morocco since the dawn of history and was always tolerated by society, as long as it is kept secret. However, thanks to the digital revolution, gays and lesbians are coming out of the closet to display openly their sexual identity, without fear of any retribution. Also, Tangier, Marrakesh, Essaouira, and Agadir have become gay nests alongside the traditional Tangier gay community which thrived thanks to foreigners, some of them very prominent on the public scene such as the late French writer Jean Genet and the late American writer Paul Bowles. Moroccan gays are not only coming out of the closet, but they are also writing about their sexual identity, such as Moroccan-French novelist Abdellah Taia, who published a book on his sexual orientation.

Public show of affection: In 2013 two youngsters from the conservative northern city of Nador, on leaving their school, kissed publicly and the video of their embrace was posted on YouTube. Their unusual act triggered various reactions nationwide: those who applauded the act and asked for the strengthening of personal freedom and those religiously-minded people who asked the State to punish the kids, who were, supposedly, under the subliminal influence of the western media.

In compliance with its conservative nature, the state arrested the couple, but this triggered a worldwide campaign for their release and couples of youngsters organized a kiss-in in front of the parliament in Rabat in defiance of religious conservatism. Under the pressure of the global public, the government released the kids and dropped charges.

The Amazigh support Israel not Palestine: Since the revival of the Amazigh nationalism in North Africa, the Amazigh militants in Morocco have been denouncing the official line on Islam and calling for the rewriting of history by stating clearly that the Arabs in the 7th century conquered North Africa by the sword and not by the act of peaceful conversion of the population to Islam known as foutouhat.

They reject Islamic presence in the area as the worst form of colonialism ever experienced by the Amazigh people of this region. In their resistance to the Arab obliterating culture, they called for making Tamazight an official language, which was achieved in the constitution of 2011. However, their most abrasive move is to call for friendship with Israel by setting up Israeli-Amazigh associations, arguing that there are many Jewish Amazigh people, who have made a notable contribution to the culture and that Israel like the Amazigh are victims of pan-Islamism and pan-Arabism.

Besides, films were made about the painful departure of the Jewish Amazigh to Israel such as Kamal Hachkar’s film « Tinghir-Jerusalem: les échos du Mellah ». For many Moroccan Arab nationalists, these Amazigh people are traitors of Morocco and Islam and should be arrested and put in jail.

Many people are arguing, quite strongly, that the Arab Spring is gone to the dogs, and it might seem so, but the truth of the matter is that it is not. It is just picking up steam, redefining the route and straightening up priorities to resume progression, stronger than ever. The big change will happen in the Arab World, come what may, maybe not all at once, as many people would want, but in an incremental fashion because Arab minds are all framed in a traditional way and all constrained by religious dogmatism and determinism.

But, while the political change is happening slowly, the cultural revolution is bulldozing its way ahead, with much determination, and Moroccan millennials, in particular, and Arab millennials, in general, are busting taboos with much strength, be they cultural or religious, and thus creating a new reality on the ground. They want to create a future of their liking, responding to their real needs and not to the expectations of a religion or a culture imposed on them. Actually, all they are doing is exercising their right to choose and decide for themselves.