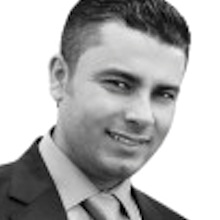 Domination of natural resources by party leaders, mismanagement of revenues, and widespread corruption are weakening the resilience and spirit of coexistence in Kurdish society, Aras Ahmed Mhamad writes.

The Kurdistan Democratic Party (KDP) suspended the Kurdish parliament on October 12, 2015, and has even prevented the Speaker of Parliament, Dr. Yousif Muhammed, from entering Erbil. Civic servants have not been paid since September 2014 and a new wave of Kurdish migration has started, heading primarily to Europe as a result of unemployment. We have also seen demonstrations since October 2015, especially in Slemani and Halabja provinces. There is a lack of clean water, electricity, and other basic needs for survival, and there is discontent over Masoud Barzani’s refusal to step down after his two terms, and two year extension, are over.

After the glorious 1991 Kurdish Uprising, both the Iraqi government and the United Nations imposed an economic embargo on Kurdistan, restricting trade between the Kurds and the outside world, hence abandoning the Kurdish people under the mercy of the then two ruling parties, the Patriotic Union of Kurdistan (PUK) and the KDP.

The civil war between the PUK and the KDP in 1994 divided Kurdistan between two zones and propelled the Kurds to resort to the black market to provide for their families. The war instilled hate in the minds and hearts of the entire population and the wounds have yet to be healed. Whenever there is a media war or a disagreement between the KDP and the PUK over oil, the KDP prevents PUK affiliated members and news agencies from entering Erbil at Degala checkpoint. In fact, the KDP shut down KNN and NRT offices in October 2014 and propelled their journalists to leave Erbil.

“There is a lack of clean water, electricity, and other basic needs for survival”

The 2003 Operation Iraqi Freedom was a great opportunity for the KDP and the PUK to unite and promote peaceful coexistence between the various layers of society, ending their animosity and pay back to society. However, the current economic and social circumstances show that they have failed. They have not only disappointed the Kurds, but also weakened the spirit of the Kurdish people and sabotaged their resilience.

Nevertheless, the work of independent media and the establishment of Gorran Movement as a political party in Slemani in 2009 have played an important role in the high level of activism, campaigning and demonstrating in the province. Although they have not been successful in reaching out to people in Duhok and Erbil, which are controlled by KDP, the demonstrations have helped a lot in the construction of a new type of Kurdish national identity, different from that of the past century.

Kurdish people now ask for a government that is based on the rule of law and democracy and not a system that is based on charismatic leaders or party-states. The one-party rule may work for some time, but it will soon collapse as history has shown us that that system only services a small group of people. Kurds have actually been, throughout the past century, victims of one-party rule, and the Baath party is just one example.

Our enemy’s logic in both cooperating with and excluding Kurds within their boundaries and narratives of nationhood has been based on protecting their own economic interests and territorial integration. They have never trusted Kurds and have always considered Kurds as their enemies. Kurds need to create a discourse and logic that is based on the principles of democracy and coexistence in order to avoid making the same mistakes that have crippled other Middle Eastern societies.

Kurds have survived unspeakable brutalities such as the Black Anfal Campaign from 1986 to 1989, chemical attacks on Halabja in 1988, and numerous internal military conflicts. Successive Iraqi leaders and regimes, including the Baath regime, could not destroy Kurdish resilience and resistance. No foreign force has ever been able to completely dominate the Kurds.

These days, however, we see neither resilience nor resistance. Corruption and favoritism have almost ruined everything. Many people I talk to on a daily basis no longer feel that they are part of this great and fertile land.

Civic servants have not received their monthly payments in five months (so far only the Peshmerga have received their salaries for about a month, while teachers received half of their salaries. This is despite the fact that thousands of teachers refused to accept payments), there is water shortage, a lack of cash in the banks, citizens protesting against not having nationwide electricity, there is a lack of services, and there is favoritism in governmental establishments. These are the characteristic features of the Kurdistan Regional Government (KRG).

Another huge problem is unemployment. The KRG has not employed anyone since 2014 (there are claims that party leaders only employ their relatives and those who have wasta). Guest teachers, for example, receive only 3 US dollars for a lesson. Lessons are usually about 40 minutes, according to the Ministry of Education’s regulations. Contractual teachers receive about 400 US dollars per month and there is no guarantee that the Education Ministry will extend their contracts, as KRG has not been able to provide salaries for five months. Moreover, economic crises and delays in salaries have forced some 10,000 teachers to officially ask for permission to work in other sectors in order to provide for their families, according to the Ministry of Education.

Since August 2014, Kurdistan’s Peshmerga has been a vital force in the battle against Daesh. International media as well as political leaders across the globe have applauded the Peshmerga’s heroic struggle in keeping not only the Kurds safe but also minorities across Iraq, including Christians and Assyrians. There are currently two million refugees and IDPs in Kurdistan.

However, what has undermined and weakened our spirit of coexistence is the domination of natural resources by party leaders, mismanagement of revenues, and widespread corruption, which have crippled the Kurdish society. Kurds now call on justice and rule of law, exchange of power, and proper distribution of revenues.