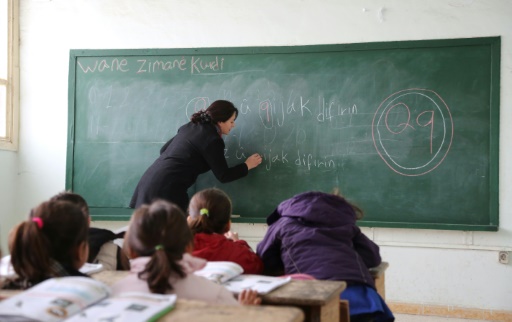 Lined up in a chilly schoolyard in northeast Syria, primary school students say good morning to their teachers in the Kurdish language before rushing inside for class: "Roj bas, mamuste!"

The Kurdish language was once banned by the government in Damascus, but now the local semi-autonomous government has rolled out an entire curriculum for primary school students in Kurdish in parts of the territory under its control.

The curriculum is currently being taught alongside the government’s Arabic-language programme at institutions like the Musa Bin Nasir school in the city of Qamishli.

“Our teachers tell us stories and teach us the names of animals and flowers,” said Brefa, whose parents were forbidden from learning Kurdish.

The new curriculum has been developed by the autonomous Kurdish administration, which runs its own government institutions, security forces and now schools in parts of northern and northeast Syria.

The administration took over when government forces withdrew from Kurdish areas in 2012, a year after Syria’s popular uprising erupted.

There were around three million Kurds in Syria before the war, though not all identified primarily as Kurdish.

The minority was heavily discriminated against prior to Syria’s uprising, with their language banned in official contexts and hundreds of thousands denied passports and banned from public sector jobs.

But with the withdrawal of government forces from majority Kurdish areas, the minority has begun to assert itself, including reviving its language.

Bundled in coats and hats to stay warm, children sprint into different classrooms at the school.

While Arab students will follow the existing Arabic programme developed by Syria’s government, Kurdish students now study a Kurdish curriculum that their own administration began implementing in the 2015-2016 academic year.

More than 86,000 students are being taught by about 3,830 instructors in schools run by the autonomous administration, says deputy head of education Samira Haj Ali.

The new curriculum has already been rolled out for primary school students, though older pupils are still studying the government’s curriculum until an alternative is developed.

Haj Ali says the autonomous administration eventually plans to also implement its own Arabic- and Syriac-language curricula next year.

It has set up teaching institutes to train instructors on the Kurdish curriculum and is planning to open similar centres once its Arabic and Syriac programmes are ready.

The administration’s move has been controversial: Syria’s government has shuttered its schools in the affected areas and refused to pay teachers using the Kurdish curriculum.

And even some Kurdish parents have pulled their children out of the new independent schools.

Amina Berro, an English language teacher and a Kurd, transferred her children to a government-run school in protest at the new Kurdish programme.

Her children were studying the Arabic curriculum, but she said she was uncomfortable having the new programmes side-by-side.

“The Kurdish curricula is not recognised and the teachers are not capable enough,” she told AFP.

Berro said she supports teaching the Kurdish language as a subject matter, but not an entire curriculum being taught in the language.

Some of the students in Qamishli’s schools are Arabs displaced from elsewhere in the country.

After trying the Kurdish curriculum, she moved to the Arabic section at Musa Bin Nasir.

“I’m really happy when I’m with my classmates. In the beginning, it was hard to get used to them. Qamishli is a foreign city for me and people speak a language I don’t understand,” she said.

“But now things are easier because I understand very well,” she added excitedly.

For Kurdish families, learning the native language represents the realisation of a childhood dream.

Jana Musa, a 21-year-old Kurdish language teacher, said she hopes “that all students will learn their mother tongue”.

“We’re teaching them the alphabet and the subject of social issues,” Musa said, wearing a thick green coat as she corrected students’ assignments.

Jamil Murad, a 44-year old director, learned the Kurdish language in secret while growing up.

He is thrilled that his eight-year-old son, Raman, can now do the same in the open.

“Language is part of the survival of a people,” he said.

In a candle-lit room in northeast Syria, Murad was helping Raman complete his homework.

For Murad, teaching the Kurdish language is an investment in his people’s future.

“The biggest achievement by the autonomous administration… was in teaching tens of thousands of its children their mother tongue,” he said.

“They are our future, even if the scales are tipped against us.”